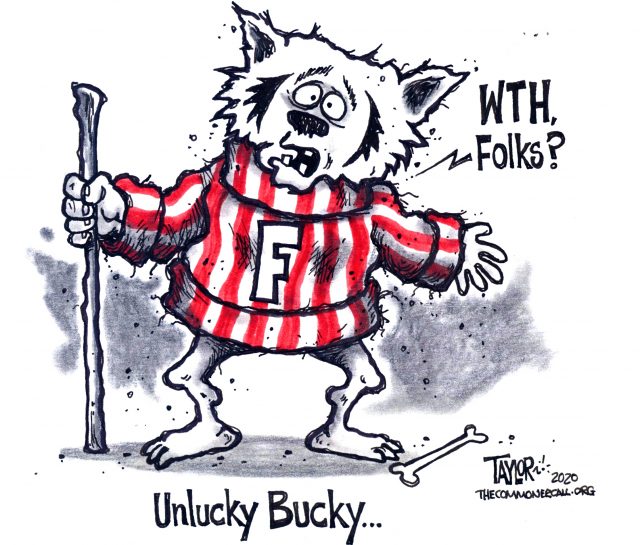 A failed state is one that can no longer claim legitimacy or perform a government’s core function of protecting the people’s basic security. Lately, the Wisconsin supreme court seems to be doing its level best to make its state qualify for “failed” status. Multiple decisions have both undermined the government’s legitimacy and endangered the people.

First, there was the primary. Because voting in person is clearly risky during a pandemic, several states delayed their primaries to make sure everyone was able to mail in a ballot instead of having to go to a polling place. Not so Wisconsin. The state’s Democratic governor signed an executive order for an all mail-in election but was thwarted by the Republican legislature. Then the governor issued an order postponing the election. Republicans challenged it, and the Wisconsin supreme court sided with them. The primary went forward, but was a disaster: there were “long lines in Milwaukee, where only five polling places in the whole city were open” and more than 50 people appear to have contracted coronavirus as a result. Ensuring that people can vote without risking their lives is a basic duty of government, one at which Wisconsin failed.

But the Wisconsin supreme court’s latest decision is even worse. The conservative majority overturned the state’s “stay-at-home” order, immediately leading bars to be flooded with patrons. Even as public health officials stress the danger in suddenly lifting restrictions, justices presented it as a freedom issue, with one writing that the “comprehensive claim to control virtually every aspect of a person’s life is something we normally associate with a prison, not a free society governed by the rule of law”. Public opinion is generally against the anti-lockdown protests, but if a conservative minority has power, the “letting a deadly virus spread unchecked = freedom” perspective will triumph.

Courts are the least democratic branch of government to begin with; judges are like robed “philosopher kings” with the power to overturn measures overwhelmingly favored by the people. (Sometimes that’s a good thing, but decisions as to what to let stand and what to overturn are almost always political.) Once a single party dominates at court, it simply has veto power over the entire democratic process.

The court’s conservative majority has shown no hesitation in imposing its ideology on the state. As Akela Lacy reported in the Intercept, they have been denying the rights of unionized workers, ruling consistently against criminal defendants, and even overturning a rule banning people from carrying weapons on public buses.

[G]errymandered maps make it virtually impossible for them to ever lose their legislative majority. Wisconsin’s maps were crafted with such micro-precision that even if Democrats managed to win a historically high 54% of the two-party vote – a level they’ve reached only once in the last 20 years — Republicans would still end up with a solid nine-seat majority in the state assembly. In fact, Wisconsin’s maps are so gerrymandered that Republicans can win close to a supermajority of house seats even with a minority of the vote. Analyses of the maps in the lawsuit challenging the maps showed that Republicans are a lock to win 60% of statehouse seats even if they win just 48% of the vote.

In a supposedly democratic country, this should be an outrage. How can a government claim legitimacy if it does not require the people’s support? But this is true far beyond Wisconsin. …

“…Wisconsin’s maps were crafted with such micro-precision that even if Democrats managed to win a historically high 54 percent of the two-party vote – a level they’ve reached only once in the last 20 years — Republicans would still end up with a solid nine-seat majority in the state assembly.

“In fact, Wisconsin’s maps are so gerrymandered that Republicans can win close to a supermajority of house seats even with a minority of the vote. Analyses of the maps in the lawsuit challenging the maps showed that Republicans are a lock to win 60 percent of statehouse seats even if they win just 48 percent of the vote. This is precisely what happened in 2018, when Democrats won a majority of the statewide vote and swept statewide offices, but Republicans saw the size of their state-house delegation reduced by only a single seat, going from 64 of 99 seats to 63 seats.

“The current maps are far different than maps of the prior decade, which were drawn by a court in 2001 after legislative deadlock. Those maps were much more electorally responsive, allowing control of the state assembly to flip between the parties several times over the course of the decade as the mood of voters shifted — exactly what one would expect in one of the country’s quintessential swing states.

“In 2016, a panel of three federal judges struck down Wisconsin’s current state assembly maps as an unconstitutional partisan gerrymander, finding that Republicans  had drawn maps with the intent “to secure the Republican Party’s control of the state legislature for the [decade].” But the Supreme Court sent the case back to the lower court. Then, while the case was on the eve of a retrial, the Supreme Court ruled in a case from North Carolina, Rucho v. Common Cause, that partisan gerrymandering claims could not be considered by federal courts. …”