Freedom only works if it is paired with responsibility!

The first quote highlights growing problems in the White House. First, the White House is a COVID-19 hot spot; a breeding ground. Second, Trump again turns ‘reason’ on its head to tout testing as the problem, not the solution. As a man named Kevin Zegers tweeted, “My wife tested negative for pregnancy every single day of her life until 4 years ago. Then, Poof. Pregnant. Stupid tests.”

Trump added, “This is why the whole concept of tests aren’t necessarily great. The tests are perfect, but something can happen between a test….She was tested very recently and tested negative, and then today I guess for some reason she tested positive.”

TWO AIDES WHO ARE FREQUENTLY in close proximity to President DONALD TRUMP and VP MIKE PENCE have tested positive for Covid-19. The White House is now testing everyone who may come into contact with the president — they use a quick nose swab that returns results within 15 minutes.

The full scope of known COVID-19 positive or self-quarantined persons around Trump now includes the two referenced above – one of Trump’s valets, VP Pence’s press secretary (Katie Miller, married to Trump advisor Stephen Miller), Ivanka’s personal assistant, CDC Director Redfield is self-quarantined after exposure to a person that tested positive, as is Dr. Anthony Fauci and FDA Commissioner Stephen Hahn. As of Thursday evening eleven Secret Service agents had tested positive. An additional 60 were self-quarantined and another 23 have recovered from COVID-19.

Rep. Louie Gohmert (R-TX) who regularly makes a strong case for dumbest member of Congress, offered during a State Dining Room meeting attended by three dozen Republican and administration officials, “Nobody in here has the coronavirus unless it’s somebody in the media. So the only reason we would wear masks is if we were trying to protect ourselves from you in the media, and we’re not scared of you.”

Trumpsters aren’t afraid of a pandemic. With over 80,000 US COVID-19 related deaths, Trump wants you to be a warrior as he explained, “The people of our country should think of themselves as warriors. Our country has to open.” He could have added, ‘…and I have to be reelected’. 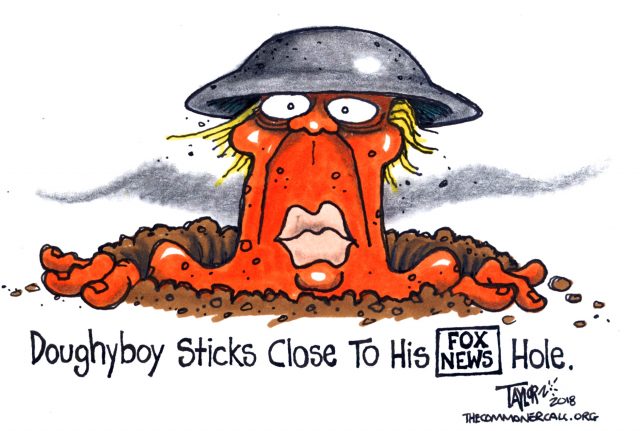 So do warriors face a COVID-19 risk?

Wisconsin Supreme Court Judge Patience Roggensack offered a question during oral arguments heard on Tuesday over a case challenging Gov. Evers (D-WI) stay-at-home orders. An attorney for Evers was citing COVID-19 spread in meatpacking plants around Green Bay as an example of how fast a hotspot can develop having gone from 60 cases to 800 in two weeks. Roggensack then commented:

“These were due to the meatpacking, though,” she said. “That’s where Brown County got the flare. It wasn’t just the regular folks in Brown County.”

So who are these warriors, these essential workers that we all depend on but maybe aren’t “just the regular folks”?

As detailed in the Bloomberg Businessweek story below, Rafael Benjamin was working at a Cargill pork and beef processing plant in Hazelton, PA. He was making $15.35 an hour and in spite of not feeling safe he stayed on the job needing one more month to reach a 17-year employment anniversary that would benefit his pension. He was also ordered to stop wearing a mask because it was making others nervous. Spoiler, it is not a happy ending.

Nebraska Gov. Pete Ricketts (R-NE), managing a COVID-19 outbreak in meat processing plants in the Grand Island, Nebraska area explains that plants need to stay open and we must respect that these are private companies. “This is important, mission-critical stuff we’ve got to keep open.” Ricketts has been a lead voice on a theme characterizing communities as the problem, not the meatpacking plants.

You are a warrior, we need you – but you are also the problem. ‘Work’ — and certainly not the corporation you work for — is not the problem; it’s your irresponsible actions outside of work.

Health and Human Services Secretary Alex Azar is absolving the meatpacking plants and blaming the warriors for bringing the virus into the work place. A stunning conclusion given there is little testing and states like Nebraska do not even require employers to disclose the results of tests to the community, or anyone else.

“Those infections, he said, were linked more to the “home and social” aspects of workers’ lives rather than the conditions inside the facilities, alarming some on the call who interpreted his remarks as faulting workers for the outbreaks, the people said.

“”He was essentially turning it around, blaming the victim and implying that their lifestyle was the problem,” said Rep. Ann Kuster (D-N.H.), who told POLITICO that Azar’s comments left her deeply concerned about the administration’s priorities in fighting the pandemic. “Their theory of the case is that they are not becoming infected in the meat processing plant, they’re becoming infected because of the way they live in their home.””

Nebraska Gov. Ricketts says, “we’ve got to keep open”. Wisconsin Justice Roggensack notes that these warriors are “not regular folks”. While I can’t say exactly what Roggensack meant by her remark, and she has declined to clarify, we do also know that employment at meatpacking plants is disproportionately made up of African-American and Latino workers. This is part of a larger problem…

Disproportionately black counties account for over half of coronavirus cases in the U.S. and nearly 60% of deaths, study finds

“Black people make up a disproportionate share of the population in 22 percent of U.S. counties, and those localities account for more than half of coronavirus cases and nearly 60 percent of deaths, a national study by an AIDS research group found.”

Washington Post columnist E.J. Dionne Jr. calls this a “class war against front-line workers”; Yale epidemiologist Gregg Gonsalves says this is “mass death by public policy”, questioning, “What proportion of the deaths will be among African-Americans, Latinos, other people of color?” Gonsalves adds, “this is getting awfully close to genocide.”

No worries, Trump offers more flight-of-fancy false hope noting, “this is going to go away without a vaccine.” Remember, while Trump regularly ‘cheerleads’ with predictions of how we’ll all be okay in spite of the pandemic, the number of confirmed US cases has gone from 678 on March 9 to 1,309,541 on May 9. But Jack Holmes writing for Esquire nails it:

No Matter How Many People Die, Trump Will Declare Victory

Subhead: The administration will start from one essential conclusion—we did a good job—and push any shards of reality to support it.

Or as S.V. Date writes for Huffpost: Trump Said He Could Kill Someone On 5th Ave. But How About 50,000 Across America?

That’s right – you are essential, you are a warrior, but you’re also the problem. So get out there and get back to work. Trump is doing everything he can – especially by not wearing a mask because it would “send the wrong message”. While he screams about not being properly protected as White House COVID-19 cases blossom, he signals ‘got your back’ by not wearing a mask. That and his fear it would “make him look ridiculous”.

I say we are well past a problem with Trump ‘looking ridiculous’, but fortunately there are people that DO know how we can safely ‘reopen’ and we’re nowhere near there yet.

As States Loosen Pandemic Restrictions, Dr. Leana Wen Warns “We Are Not Ready for a Safe Reopening”

It is a short and powerful interview. Nebraska officials chase outbreaks and then start testing, much like Trump limited flights from China after the virus was in the United States. Dr. Wen tells us what we know: We have to have widespread testing before we reopen.

A few troubling points. Starting with Wisconsin, as many expected:

72 got COVID-19 after being at large event: “More than 70 people who tested positive… indicated they had attended a large gathering” a possible link to the April 24 Madison protest to ‘reopen’ Wisconsin.

Please read the article, this underscores our lack of knowledge with how various age groups could face different risks and how much we don’t know about long term effects for those that ‘recover’ from the virus.

A glimmer of hope, I’ve offered reports of this prior: Blood thinners show promise for boosting the survival chances of the sickest covid patients

A Trump agency “snubbed” an offer to manufacture “millions of N95 masks” (1.7 million per week) back in January when Trump was assuring us we were all safe. The offer came from Prestige Ameritech. Owner Michael Bowen noted that he was a “patriot first, businessman second” before expressing his frustration, “Rick, I think we’re in deep shit.” Bowen was predicting a shortfall in N95 masks, and ‘Rick’ is former director Medical Advanced Research and Development authority Rick Bright, a whistleblower whose report highlighted this dismissal of the offer by the Trump administration.

There is always so much more. The brutal jobs report, or Trump’s war over voting laws and against calls for safer balloting. We could spend time on Trump’s personal attorney and attorney general William Barr’s action to withdraw the federal case against former Trump national security adviser Michael Flynn who pleaded guilty twice but Trump is now saved from having to issue a ‘messy’ pardon. If you care to: An Ugly Day for the Justice Department.

But in answer to your burning question…