A few notions or Trump self-declarations to dispel:

Four weeks ago the number of US persons reported as dying of COVID-19 was 58. On the afternoon of Easter Sunday that number is roughly 22,000.

One month ago Florida was open for Spring Break, a state with an $86 billion tourist industry. I’ve carried reports of cell phone tracking of Florida Spring Break disbursement across the eastern US and resultant linked confirmed cases at UW-Madison and University of Texas-Austin. This New York Times article starts with the personal account of Beatriz Diaz attending the Winter Party Festival in Miami Beach rationalizing, “I was thinking, ‘OK, well, hold on, the government did not cancel it, so it should be fine.’” Within days, there were Facebok reports of a “D.J. and several partygoers who were suddenly terribly ill.”

There are now two known deaths and 38 persons tested positive or symptomatic.

Trump lies about acting early and shutting down travel from China after COVID-19 was confirmed in the US. Florida Gov. Ron DeSantis (R) now blames travelers from New York and Europe.

National Institute of Allergy and Infectious Diseases director Dr. Anthony Fauci, says, “calls to implement life-saving social distancing measures faced “a lot of pushback” early in the US coronavirus outbreak” and “I mean, obviously, you could logically say that if you had a process that was ongoing and you started mitigation earlier, you could have saved lives.“ Fauci does offer an aspirational note, “Obviously, no one is going to deny that.”

CNN reminds us that by the third week in February a “containment strategy” was no longer viable and it was time to move “toward a mitigation strategy”. Weeks before Trump did so, weeks before Spring Break.

He Could Have Seen What Was Coming: Behind Trump’s Failure on the Virus

The guy that relied on his instincts to get us here was asked about what metrics he would use to make a decision about ‘reopening the country’ answered by pointing to his head, “the metrics right here, that’s my metrics.”

But the subhead reminds us of how scary this is: “An examination reveals the president was warned about the potential for a pandemic but that internal divisions, lack of planning and his faith in his own instincts led to a halting response.”

The article was a bombshell on Saturday, relating a series of email exchanges, a tip of the Trump ‘denial’ iceberg. “Hardly a lone voice”, a senior Department of Veterans Affairs medical adviser offered by email on Jan. 28, “Any way you cut it, this is going to be bad.”

Trump’s ‘limitations’ included his “suspicion of and disdain for” the “Deep State”. Also his “how to deal with China” given his trade war and other complications. The New York Times notes under a heading of, “But dozens of interviews with current and former officials and a review of emails and other records revealed many previously unreported details and a fuller picture of the roots and extent of his halting response as the deadly virus spread.”

One of the lies is Trump’s disavowal of a Jan. 29 email from his trade advisor Peter Navarro laying out the risks including, “as many as half a millions deaths and trillions of dollars in economic losses.”

Trump lies that he doesn’t remember Navarro’s warning. Instead a “subdued” and “baffled” Trump finally endorsed social distancing in mid-March and ran with self-exoneration of his lies about containment, or as the New York Times notes, “the containment illusion”.

All the rest – China lied, World Health Organization, Obama ‘did it’ or ‘didn’t do it’, ‘the governors messed up’, ‘it was never the roll of FEMA or the National Strategic Stockpile’… all more Trump illusion.

A final note, for those wondering if Trump appointed VP Mike Pence as the fall guy; this was three weeks ahead of social distancing efforts:

“With Mr. Pence and his staff in charge, the focus was clear: no more alarmist messages.”

Let Pence take the fall. But at the current top of Trump’s personal defense is this:

“States can do their own testing. … We’re the federal government. We’re not supposed to stand on street corners doing testing.”

“Whatever the states can get, they should be getting. I say we’re sort of a backup for the states.”

Trump finally admitted on Thursday, there is no national strategy for testing and nor will there be. Even worse, Trump said, “mass testing for the coronavirus is not necessary for the United States to get back to normal”.

As long as there is someone to blame:

“Administration officials, speaking on the condition of anonymity to describe internal deliberations, say the White House has made a deliberate political calculation that it will better serve Trump’s interest to put the onus on governors — rather than the federal government — to figure out how to move ahead.”

But it’s not enough to blame governors, Trump is also siding with Red states over Blue states and trying to support vulnerable GOP Senators up for reelection. The same is happening in Arizona for Sen. Martha McSally (R-AZ) but here’s the Trump action to benefit Sen. Cory Gardner (R-CO). Trump nixes a 500 ventilator order Gov. Jared Polis (D) to ‘reinstate’ a delivery of 100 ventilators “at the request of Senator Gardner”:

“Trump had only days before prevented Colorado Gov. Jared Polis from securing 500 ventilators from a private company, instead, taking the ventilators for the federal government. Polis sent a formal letter pleading for medical equipment, but the president took the time to make clear he was responding to a request from Gardner. We are left to believe that if Colorado didn’t have a Republican senator in office, our state would not be getting these 100 ventilators.”

Trump’s illusion helped, it gave him a small and brief bump in the polls, but his relentless (almost) daily finger-pointing briefings have helped walk back that gain as we settle back into a grind of Trump approval ratings of just over 40%.

Trump wants to reopen the country but has no plan for nationwide testing.

So much for Myth #1, Trump is NOT doing a great job.

And Trump is not a populist. I am surprised by how many people, not Trump supporters, credit Trump for (merely) saying things like deferring student debt payments (not forgiving, but a moratorium for payment) or lowering the age for social security or making coronavirus tests available for free for those that cannot pay. Haven’t we learned to pay attention to what he does, not what he says?

To put this in context; Trump knows his base:

When you drown the government in the bathtub, people die

I am cherry-picking one comment – the reality is over years, ‘undone’ by both parties:

“A $15 billion grant program under the 2010 Affordable Care Act, the Prevention and Public Health Fund, was plundered for other purposes.”

Now Americans are paying for this with their lives — and their livelihoods.

Trump will consider bailing out cruise ship companies that are not even US companies and very few Americans comprise the work force, but this: The pandemic has pushed USPS to the brink, but Trump and Mnuchin shot down emergency aid

But a few stories from Wisconsin… 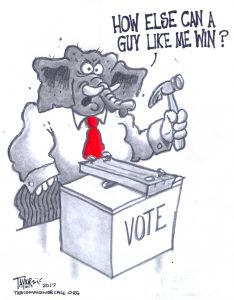 A story that didn’t have to be…

A very personal story from a poll worker who assures us if she was safe, “No, Not at all.” And closes with, “As a progressive/liberal I can only hope that all of us—voters and poll workers—put ourselves out there to shut down the Republicans in our lovely state.”

Similarly, lawyer and NeverTrumper George Conway comments on forcing the polls to open, “Is that the result you want? If it isn’t, then you should applaud the courts in the Wisconsin cases for upholding the rule of law. And you should put the blame for allowing risky in-person voting squarely where it belongs — on Wisconsin’s legislature.

Or Dionne Searcey for the New York Times notes of the “scorched-earth political warfare in America’s Dairyland:

“The Wisconsin State Legislature couldn’t agree on who to honor for Black History Month. It couldn’t hold a special session on gun violence that lasted more than a few seconds. It had stalled for weeks on releasing money to help farmers struggling with mental health issues.

“So Brad Pfaff wasn’t all that shocked that, because of a partisan standoff over postponing the election, thousands of mask-wearing citizens made their way outside during the global coronavirus pandemic to vote last Tuesday.”

Trump is a failure as a leader against COVID-19. No matter what he may mumble at times, he is not a populist. Trump and Trumpsters want to remain the minority party in charge – maybe at your risk. Farm workers, grocery clerks, medical personnel – heroes, but do we all agree? If we truly agreed would we be doing the things we are doing or not doing?

Trump does not have a plan. Other than reopening the nation so his vaunted economy can lift him to reelection. But don’t take my word for it:

“”Why don’t we let this wash over the country?” Trump reportedly asked Dr Anthony Fauci, the director of the National Institute of Allergy and Infectious Diseases, one of the top scientific experts on the president’s coronavirus task force.”