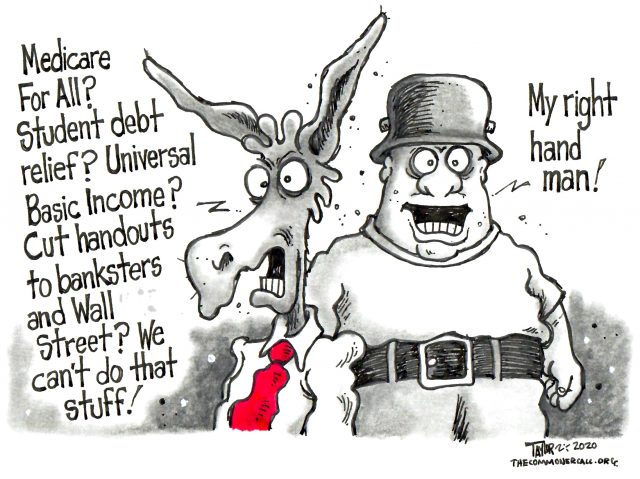 If the Democrats refuse to harness the legitimate rage of Americans and direct it at those responsible for our predicament, the right will make this anger its own and will win.

THE POLITICAL POSSIBILITIES of this moment are different than anything we have ever experienced. We possess a once in a lifetime opportunity to make the United States a more humane country. But if we fail to seize it, we will face mortal danger from the right.

That’s not hyperbole. The anger of Americans, once they figure out what’s being done to them right now, is going to be volcanic. The fallout from 9/11 and the great recession of 2007-2010 will be imperceptible in comparison.

Not long from now, almost everyone will have a family member or friend who died of Covid-19, many of them suffocating in isolation wards with insufficient treatment, perhaps deprived of a ventilator that would have saved their lives. Huge swaths of the country are plummeting into desperate penury, even as they witness large corporations unlock the U.S. Treasury and help themselves to everything inside.

During the Great Depression, Franklin D. Roosevelt and unions organized the anger and used it to create the New Deal and the largest middle class in history. In unluckier countries, like Germany, Italy and Japan, the political left failed. The fury was organized by fascists, and directed at innocents.

John Steinbeck’s 1939 novel “The Grapes of Wrath” describes a similar moment during the Great Depression, when people starved even as orchards of fruit were burned to make the food that remained more profitable: “Men with hoses squirt kerosene on the oranges, and they are angry at the crime, angry at the people who have come to take the fruit. … There is a crime here that goes beyond denunciation. There is a sorrow here that weeping cannot symbolize. There is a failure here that topples all our success. … In the souls of the people the grapes of wrath are filling and growing heavy, growing heavy for the vintage.”

A blood sacrifice to profit

We’re about to live this again, in more sophisticated ways. Then it was fruit being incinerated so no one could eat it. Now it’s cheap ventilators that were never built because a company called Covidien worried they would compete with their more expensive models. It’s N95 masks that were not available because President Donald Trump delayed invoking the Defense Production Act in order to protect corporate power. It’s tens of thousands of hospital beds being eliminated in New York and New Jersey because the surplus capacity cost money; some of those hospitals were turned into luxury condos. Now, as it was 85 years ago, human beings are being offered as a blood sacrifice to profit. Now as then, the resulting wrath will be towering.

What we know from history is that someone always shows up to harvest this level of ambient rage — but it can go in two directions. …