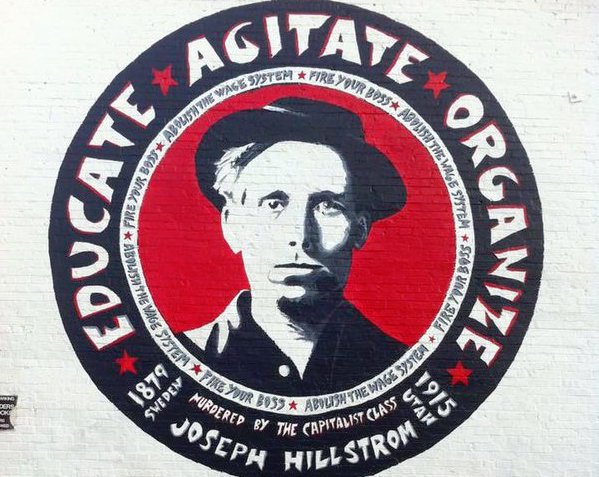 The mural on the side of the Ken Sanders Rare Books building in downtown Salt Lake City, Utah.

The new letter, signed by coalition of eight youth movement leaders—including Alliance for Youth Action, March for Our Lives Action Fund, and the Sunrise Movement—was released the same day Sen. Bernie Sanders (I-Vt.) announced the end of his presidential campaign run and just as Biden responded with a statment in which he appealed to Sanders supporters saying, “I understand the urgency of what it is we have to get done in this country,” and vowed to defeat President Donald Trump in the general election.

But to realize that victory and win them over, the groups wrote, Biden still has a lot of work to do.

For one thing, the letter to Biden stated, “it is clear that you were unable to win the votes of the vast majority of voters under 45 years old during the primary”—a cohort “poised to play a critical role deciding the next president.” The groups grounded their demands in recent history as they called on Biden to recognize why much bolder policies are necessary:

[W]e grew up with endless war, skyrocketing inequality, crushing student loan debt, mass deportations, police murders of black Americans and mass incarceration, schools which have become killing fields, and knowing that the political leaders of today are choking the planet we will live on long after they are gone. We’ve spent our whole lives witnessing our political leaders prioritize the voices of wealthy lobbyists and big corporations over our needs. From this hardship, we’ve powered a resurgence of social movements demanding fundamental change. Why would we want a return to normalcy? We need a vision for the future, not a return to the past.

To help reach that vision, the letter outlines specific policy recommendations for Biden that include: embracing the Green New Deal legislation and making commitment to a just transition to 100% clean energy by 2030; comprehensively working towards gun violence prevention; expanding DACA and closing “the vast and cruel web of detention camps”; supporting Medicare for All; ending the failed War on Drugs; supporting free tuition at public colleges and vocational schools; and repealing the 2001 and 2002 AUMFs that have resulted in nearly two decades of constant overseas war.

The letter also demands that Biden adhere to personnel guidelines that would show he understands that the corporate grip on the Democratic Party must be loosened. “Commit to appointing progressive elected officials who endorsed Bernie Sanders or Elizabeth Warren as Transition Co-Chairs, such as Representatives Ro Khanna, Pramila Jayapal, Ayanna Pressley, or Katie Porter,” the letter says. The groups also called on Biden to vow to have no Wall Street executives or corporate lobbyists in his Cabinet, and to create a task force exclusively focused on issues unique to young Americans.

Following through on the prescriptions, the groups assured Biden, won’t represent some fringe approach.

“Calling for solutions that match the scale, scope, and urgency of the problems we are facing is not radical,” the letter stated. “If nothing else, this moment of crisis should show that it is the pragmatic thing to do.”

We write to you as leaders from a diverse array of organizations building political power for young people in the United States. We are all deeply committed to ending a presidency that has set the clock back on all of the issues that impact our lives.

While you are now the presumptive Democratic nominee, it is clear that you were unable to win the votes of the vast majority of voters under 45 years old during the primary. With young people poised to play a critical role deciding the next President, you need to have more young people enthusiastically supporting and campaigning with you to defeat Trump. This division must be reconciled so we can unite the party to defeat Trump.

Messaging around a “return to normalcy” does not and has not earned the support and trust of voters from our generation. For so many young people, going back to the way things were “before Trump” isn’t a motivating enough reason to cast a ballot in November. And now, the coronavirus pandemic has exposed not only the failure of Trump, but how decades of policymaking has failed to create a robust social safety net for the vast majority of Americans.

The views of younger Americans are the result of a series of crises that took hold when we came of political age, and flow from bad decisions made by those in power from both major parties. For millions of young people, our path to a safe and secure middle class life is far more out-of-reach than it was for our parents or grandparents. We grew up in a world where “doing better than the generation before us” was not a foregone conclusion.

Instead, we grew up with endless war, skyrocketing inequality, crushing student loan debt, mass deportations, police murders of black Americans and mass incarceration, schools which have become killing fields, and knowing that the political leaders of today are choking the planet we will live on long after they are gone. We’ve spent our whole lives witnessing our political leaders prioritize the voices of wealthy lobbyists and big corporations over our needs. From this hardship, we’ve powered a resurgence of social movements demanding fundamental change. Why would we want a return to normalcy? We need a vision for the future, not a return to the past.

New leadership in November is an imperative for everything our movements are fighting for. But in order to win up and down the ballot in November, the Democratic Party needs the energy and enthusiasm of our generation. The victorious “Obama coalition” included millions of energized young people fighting for change. But the Democratic Party’s last presidential nominee failed to mobilize our enthusiasm where it mattered. We can’t afford to see those mistakes repeated.

Young people are issues-first voters. Fewer identify with a political party than any other generation. Exclusively anti-Trump messaging won’t be enough to lead any candidate to victory. We need you to champion the bold ideas that have galvanized our generation and given us hope in the political process. As the party’s nominee, the following commitments are needed to earn the support of our generation and unite the party for a general election against Donald Trump:

In addition to these policy and personnel commitments, you and your campaign must demonstrate a real passion and enthusiasm for engaging with our generation and its leaders. It’s not just about the policies and issues, but also about how you prioritize them, how you talk about them, and how you demonstrate real passion for addressing them. You must demonstrate, authentically, that you empathize with our generation’s struggles.

Calling for solutions that match the scale, scope, and urgency of the problems we are facing is not radical. If nothing else, this moment of crisis should show that it is the pragmatic thing to do. We want results and we’re leading some of the movements that will help deliver them.

The organizations below will spend more than $100 million communicating with more than 10 million young members, supporters, and potential voters this election cycle. We are uniquely suited to help mobilize our communities, but we need help ensuring our efforts will be backed-up by a campaign that speaks to our generation. Our generation is the future of this country. If you aim to motivate, mobilize, and welcome us in, we will work tirelessly to align this nation with its highest ideals.

(Our work is licensed under a Creative Commons Attribution-Share Alike 3.0 License. Feel free to republish and share widely.)
Link To Story