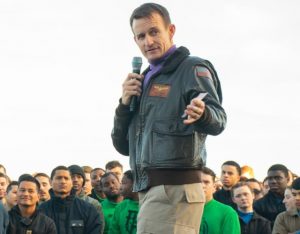 In a sorrowful time when “a true patriot gets fired for doing the right thing,” the Navy captain ousted for blowing the whistle on Navy inaction as coronavirus ravaged his crew walked off his ship Friday to the stirring sound of thousands of sailors chanting, “Cap-tain Cro-zier! Cap-tain Cro-zier!” Navy Capt. Brett Crozier “was wrongfully relieved of command but did right by the sailors,” most sentient beings agree, after he wrote a pained letter leaked to the San Francisco Chronicle urging “decisive action” and warning higher-ups the outbreak could unnecessarily kill scores of sailors aboard the USS Roosevelt. A Santa Rosa native and U.S. Naval Academy graduate praised as “a leader of utmost character,” Crozier had amassed more than 3,000 flight hours piloting Seahawk helicopters and later Hornet fighter jets in two tours during the Iraq War. The ship was on a Pacific deployment before it was forced to divert to Guam after several virus cases were reported; thanks to close quarters and a failure to evacuate and isolate, at least 1,000 of its over 4,000 young men and women have now tested positive. In his letter,  Crozier charged that keeping them on board “is an unnecessary risk and breaks faith with those Sailors entrusted to our care.” Describing an “ongoing and accelerating” spread of the disease, he pleaded for “compliant quarantine rooms” on shore in Guam “as soon as possible.” “This will require a political solution but it is the right thing to do,” he wrote. “We are not at war. Sailors do not need to die. If we do not act now, we are failing to properly take care of our most trusted asset — our Sailors.”

A few days later, Acting Navy Secretary Thomas Modly announced Crozier would be relieved of his command because he “exercised poor judgment,” which is Trumpian for “told the truth about a problem and sought to do something about it.” After some blather about unclassified email and chain of command, Modly said Crozie let the outbreak “overwhelm his ability to act professionally…It creates (the) perception that the Navy is not on the job, the government’s not on the job, and it’s just not true.” (Pause for bitter laughter.) Backlash to the firing was swift, with current and retired military deeming it “abject stupidity” aimed at a guy who next January should be named Secretary of the Navy. Over 85,000 people signed a petition calling for Crozier’s reinstatement, and a group of sailors told NBC Modly had “broken faith” with the ship’s crew. “There was nothing alarming or sensationalist in Capt. Crozier’s letter,” they said. “It was simply a recitation of the bleak facts facing this warship. Capt. Crozier has the full faith and confidence of this crew, who would sail with him again at a moment’s notice.” On social media Friday – #EverythingTrumpTouchesDies – many sailors posted emotional video of Crozier walking alone off the ship as his crew cheered and chanted.

Their admiring consensus: “This is leadership.” Wrote one, “Captain Crozier KNEW this would happen when he wrote that letter. He sacrificed his career to save his men. The man is a hero.” “That’s how you send out one of the greatest captains you ever had,” said Michael Washington on his video. “The GOAT – the man for the people.”

News reports say at least 155 sailors aboard the USS Theodore Roosevelt, one of the Navy’s Nimitz-class nuclear powered aircraft carriers, have tested positive for coronavirus. That number would now be at least 156, as its former commanding officer, Captain Brett Crozier, has just tested positive for the deadly virus, The New York Times reports.

Acting Navy Secretary Thomas Modly fired Captain Crozier after a letter the Captain sent to his superiors pleading for help, and begging them to not sit by and let his sailors die, was leaked to the press.

On Saturday, President Donald Trump justified the firing of Captain Crozier during an especially off-the-rails press conference. Trump blamed Crozier for writing “a five page letter,” and said writing the letter was “terrible,” calling it was “inappropriate” to send the letter. The President also blamed Crozier for stopping in Vietnam and letting sailors off the ship, which would not have been Crozier’s decision.

Link To Story And 1+-Minute Video