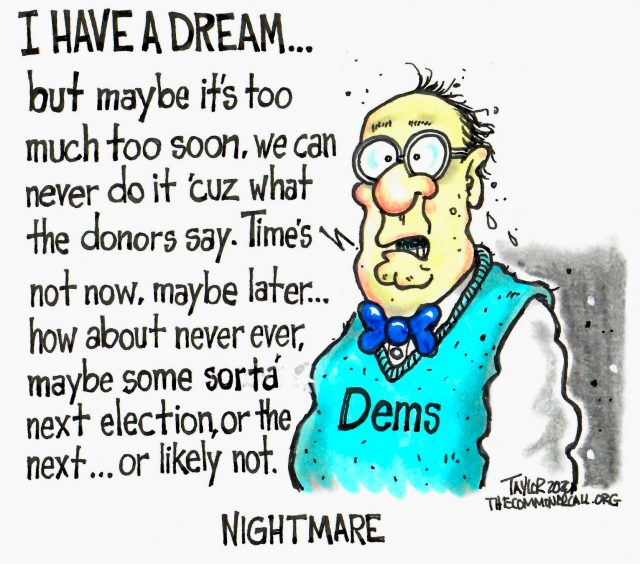 Setting aside the pain and suffering of the infected for a moment, the most amazing part of the pandemic is its pulling back the curtain on the fragility and venality of the economic/political system in the “greatest country on earth”. Yah, sure. Some of those hybrid “planned economies” had better resources, and quicker responses, when their nationally supported professionals did the jobs they had trained lifetimes for: So What? We have better bombers. In fact, a bipartisan committee (that means Dems are in on it) is insisting, in the midst of the health crisis, the Marines buy another dozen or so of the most expensive planes ever built (that don’t work well) at a time when that service is seriously wondering why it has any, especially given it is having a hard time getting people who want to fly them. Just a few could be traded in to buy a whole lot of other stuff, like lifesaving ventilators and PPE for our health care workers.

What the current crisis is really exposing is the inability of the “liberal party”, and its supporters, to understand their culpability — or their power — to find an off-ramp from our trajectory into the abyss.

Setting aside the leftist rhetoric — which is so easy and appropriate to apply these days — about socialism for the rich, we need to look at how the entire market concept is itself a smokescreen for picking the low hanging fruit and then collapsing when it’s time to pick the tough ones, (or clean up the mess from the picking). The fact that the biggest, most capitalized organizations go broke in a week after a natural disaster (implying that they will again after the next disaster) and then are propped up, instead of being allowed to follow the dogma of weak actors failing in the Pantheon of Amerikan Competition, proves for all willing to see, that we are living a lie.

The very core of our Amerikan mythology is that when times get tough we hunker down, or pick up stakes and find a new place, or grab our bootstraps and jump into the next opportunity to prosper. Ha Ha Ha. Not the corporate person. He needs a bailout to maintain his stock portfolio. He needs taxpayer-paid government stockpiles released to resell to public institutions at a hefty profit. That’s how it’s supposed to work! How can we trickle down anything, without pouring the gravy on the top?

But we know all of that stuff.

What the current crisis is really exposing (and please, do understand that we are experiencing merely the preface to a rapidly increasing number of bigger brother/sister chapters in the book we are writing together) is the inability of the “liberal party”, and its supporters,to understand their culpability, or their power, to find an off-ramp from our trajectory into the abyss. That’s a shame, because it is stuff we all have learned about since we were babies. The solutions are all around us.

Since we have learned from the very beginning that competition is good, and cheating is bad, and winning is no more important than playing a good game, and communities do things together for the common good, and (if you want be Christian about it), you are a good Samaritan, and if a bunch of people are hungry you divide the loaves and multiply the fishes.

What the heck? I learned that stuff in Sunday School in my coloring books.

But I am being accused of being Aspirational. I am told to be Pragmatic. Accept what is, and work to change it by electing people who want to buy more bombers.

Really? Is that what we need to do when, for example:

Now is the time

If there ever has been a moment in our lifetimes when being Aspirational is required, Now Is The Time.

To fix a broken system with broken tools, co-opted workers, bad bosses, and inferior materials breaks the rules we learned as toddlers.

To design a new system with false pretenses and assumptions breaks the cardinal rule of all design: being open ( a good definition of liberal) to what the needs are, and instead justifies presumptions.

The “liberal” impulse to let the folks who wrecked the system fix the system (think Obama/Timothy Geitner) is not Aspriational. Hell, it’s not even Pragmatic.

Pragmatic means “ dealing with things sensibly and realistically in a way that is based on practical considerations”. Exactly. Why would you let the robbers run the court? What’s practical about selling PPE the government bought with taxpayer money to corporations, to then sell it back to the taxpayers through their co-pays on their rip-off insurance plan?

So here’s the rub: Pragmatic is Aspirational, doh! We have been lied to about what is possible because attached to the “possible” is an impossibly complex, expensive, wasteful, destructive paradigm that any Sunday School kid can see is absurd. The dialectic is artificial.

In the words of Robert Piersig (Zen and the Art of Motorcycle Maintenance, Lila), “Good is a Noun”. You have to make it (pragmatic). You have to want it (aspirational). At the same time (power).

See you in the streets (next week?)