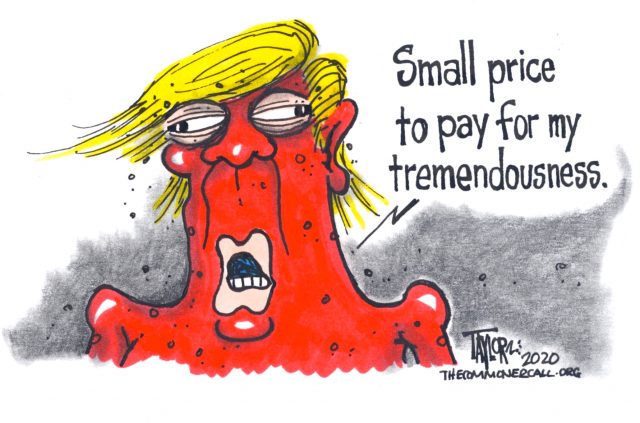 Our fearful leader’s latest gambit is to blame everyone else as he desperately tries to squirm his way to November’s election.

Donald Trump isn’t much of a doctor or scientist. He isn’t much of a diplomat or general. His leadership skills match his business skills. There’s a reason his companies went bankrupt so many times.

But he might just be a pioneer with this idea of letting people die for the sake of the country. Only a once-in-a-century leader has the guts to say out loud what the worst among us are really thinking: everyone other than me is expendable.

Anyone older is past it, for sure. The younger ones we can easily afford to lose: they don’t actually pay for anything. The smarter ones? Totally annoying. The dumber ones: what’s even the point?

The sick are a real drain on us, financially and emotionally. The poor won’t really do much in the long run, no matter how hard we try. The wealthy just keep shoving it in your face. Foreigners aren’t like us at all. And our neighbors are frankly a bit too close for comfort.

The coronavirus has no sense of morality: it just spreads its selfish genes, along with its misery and chaos, as fast as it can. At long last, this president has finally met his soulmate.

So when you add it all up, it’s only sensible that we ask everyone else to sacrifice themselves for us. For the sake of the nation and all that’s good, please just go, so that the rest of us – not counting the undesirables – can get back to our old lives.

Mr President, it might come as a shock to you but we are currently suffering from a viral case of instability, and you are one of its hotspots. As you surely recall, if you lift all restrictions, the estimated death count is 2.2 million Americans.

Pray tell: what are those other reasons that Easter is important? …

While America Care Givers Go With Out Enough Protection, Trump Sent 17.8 Tons Of Supplies To China In February After US Had First Case Of COVID-19

The first case of COVID-19 or the coronavirus hit the United States Jan. 19, 70 days ago, but President Donald Trump sent 17.8 tons of personal protective equipment (PPE) to China as cases were ramping up here at home.

Mother Jones reported Sunday, that a press release the State Department announced they would be sending up to $100 million in assistance to China so they could better handle the COVID-19 cases.

That same day, Trump tweeted he had spoken to President Xi Jinping and that China would be “successful especially as the weather starts to warm & the virus hopefully becomes weaker and then gone.” …

Priorities, Folks: As Death Toll Mounts, Trump Brags That His TV Ratings Are As Big As ‘The Bachelor’

President Donald Trump continued to display an unnervingly tone-deaf perspective on the mounting coronavirus threat in the U.S. by bragging about his TV ratings in not one — but five — tweets Sunday.

The former star of reality program “The Apprentice” boasted that the “ratings” of his news conferences are as high as the finale of “The Bachelor” and “Monday Night Football.” That drives the “Lamestream Media … CRAZY,” he wrote. Then, like a commercial for an upcoming TV show, Trump added: “See you at 5:00 P.M.!” — referring to Sunday’s press briefing. …