“I think we’ll look back on this as a defining moment of the Trump presidency because it speaks to larger concerns that people already had about Trump — that he can’t tell the truth, that he doesn’t value expertise, that he doesn’t take the presidency seriously enough.”

“No, I don’t take responsibility at all.”

A few remarks about what seems most current and most important.

Trump announced new travel restrictions including enhanced entry screenings. US airports scrambled to comply resulting in scenes like this:

“AT THIS MOMENT, HUNDREDS OF PEOPLE ARRIVING FROM NUMEROUS COUNTRIES ARE JAMMED TOGETHER IN A SINGLE SERPENTINE LINE VAGUELY SAID TO BE ‘FOR SCREENING,’” read a tweet from Tracy Sefl, who wrote that she waited for several hours to be screened at Chicago’s O’Hare International Airport.

Here is one such scene from O’Hare, the exact opposite of CDC guidelines for limiting the transfer of the virus. 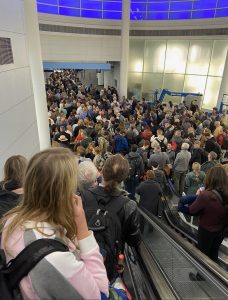 Vernon Memorial Hospital has a COVID-19 Nurses Hotline: (608) 637-4990. The hospital is also working on a drive-thru testing capability but there are no details as yet.

The Federal Reserve made a Sunday announcement of an interest rate cut, to zero, something not seen since the 2008 financial crisis. And Quantitative Easing is back with Fed purchases of Treasury bonds and mortgage-backed securities.

The House passed very limited emergency legislation to help combat the outbreak, something the Senate was unable to do. Late Friday the House passed a bill by 363-40 including 14 days of paid sick leave for only 20 percent of the work force, the issue the tripped up the Senate with Sen. Lamar Alexander (R-TN) pushing back against this. The legislation has provisions for free food for children whose schools are closed, aid for seniors, food banks and more. Trump has indicated support, so it is likely to pass in some form. Do note Republicans have inserted language to exempt small businesses from paid leave and to make sure the provision expires in one year.

The House bill as announced by Speaker Pelosi (D-CA) includes free testing for coronavirus, including for uninsured persons. (Watch Rep. Katie Porter (D-CA) convincing CDC Director Redfield to commit to this in a recent hearing, it is typical masterful Porter questioning. )

Trump’s response to coronavirus is a horrible and dangerous stew of low self-esteem, blame, conspiracy-over-facts, and Party of Trump ideology. Trump’s responses have dangerously understated risk and have been slow to promote precautions like social distancing and — of course — testing for the virus to both screen people ad provide critical public health data to assess our risk.

Trump’s Wednesday prime time speech sent stock markets reeling globally. Trump’s Friday presser from the Rose Garden was better but still his conflicted mash-up of “I don’t take responsibility at all”, pointing blame, grasping at straws did nothing to calm the nation. In other words, classic Trump. Trump even told PBS reporter Yamiche Alcindor she had asked a “nasty question” about his responsibility for shutting down the National Security Council global health security and biodefense group before waving his arms as if he ‘knew nothing’:

“It’s the – it’s the administration. Perhaps they do that. You know, people let people go. You used to be with a different newspaper than you are now. You know, things like that happen.”

Trump claimed Google had 1,700 engineers busily developing a coronavirus web site as a clearinghouse for reporting and tracking outbreaks. Um, NOPE. Google had to clarify, there was no such project underway. Here is Trump’s ad hoc lying statement:

“Google is going to develop a website — it’s going to be very quickly done, unlike websites of the past — to determine if a test is warranted and to facilitate testing at a nearby convenient location,” Trump said today. “We have many, many locations behind us, by the way. We cover this country and large parts of the world, by the way. We’re not gonna be talking about the world right now, but we cover very, very strongly our country. Stores in virtually every location. Google has 1,700 engineers working on this right now. They have made tremendous progress.”

Again, that was a Trump lie. Google reports there is no such website project underway and no 1,700 engineers working on a pandemic website project. None of what he said was true.

Here are some of the best-worst examples of Trump’s spinning whirlwind of ineptness:

“The Trump administration and health officials knew back in January that this coronavirus was going to be a major threat. They knew that tests needed to be distributed across the country to understand where there might be outbreaks. But across the month of February, as my colleague David Lim at Politico first reported, the tests that they sent out to labs across the country simply did not work. They were coming back with errors.”

The story gets even worse as Trumpsters rejected using the World Health Organization’s working test to “go its own way”.

But the worst of the worst – “it is Trump who did not push for adequate testing” over fears of how he would look to the public.

I highly recommend listening to the full program; you can’t imagine all the perverse reasons, personalities and ideology that have failed us so comprehensively.

There are models for best response and a few countries have demonstrated how best practice minimizes risk. A short list of successes you’ll never hear about from Trump include Singapore, Hong Kong and Taiwan. In a nutshell:

Trump stable genius self-promotion is all about step 1, even though he has handled even that part poorly.

Ten minutes at the teleprompter: Inside Trump’s failed attempt to calm coronavirus fears

“Ben Rhodes, who served as a senior White House aide and helped former president Barack Obama script and manage his responses to numerous crises, predicted that Wednesday night’s address will stand as “the moment people associate with the fact that Donald Trump failed the biggest test of his presidency.”

““I think we’ll look back on this as a defining moment of the Trump presidency because it speaks to larger concerns that people already had about Trump — that he can’t tell the truth, that he doesn’t value expertise, that he doesn’t take the presidency seriously enough,” Rhodes said.”

Trump’s coronavirus response has been horrible, but I don’t mean to get your hopes up. While surveys show 60% of us believe the situation will get worse, 40% or more of the population remain snugly happy with Trump’s curious brand of non-leadership.

One minor blip of conservative criticism came as the result of favored treatment for attendees of the annual Conservative Political Action Conference (CPAC). Senators and Representatives were advised of their exposure while attendees in general were not notified. Some got the VIP treatment; many were told they were not exposed. One of the most recent to self-quarantine while waiting for test results is Republican National Committee Chairwoman Ronna McDaniel. It’s like an Ayn Rand book club complaining about preferential treatment for those deemed to be more worthy.

I imagine most reading this see value in social distancing. You can go to social media to find many examples of other schools of thought and practice. My daughter-in-law in St. Louis told me about one confirmed case in her neighborhood. A young woman returned from Italy and self-quarantined but her father opted for man-about-town, has tested positive, and exposed who knows how many other people. My mother, who is turning 93, is abiding by self-distancing, but also feels it’s a bit overblown and it’s really older people who are at risk – meaning not so much her.

Choose wisely for yourself and for all of us.

If you need more inspiration, take a look at this Never-Trumper ad.

Foot Note: While this is not about coronavirus, on Sunday Trump tweeted that he is strongly considering a “full pardon” for his convicted former national security adviser Mike Flynn.