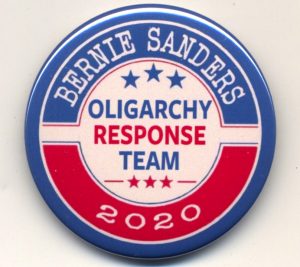 “Going forward, we have the platform; we have the issues. These have broad public support already. Exit polls show that even in states that went for Biden, majorities want to replace private healthcare insurance with a public plan and support free college tuition. Bernie can still find a path to victory by doubling down on such issues and by drawing stark political contrasts with Biden, who has always represented the banking and credit card industries. It’s going to be a damn good fight!

“In the meantime, we might be forgiven for laughing when Democratic establishment attacks burnish Bernie’s popularity and push up his approval numbers. We might be pardoned for finding comic relief in the spectacles that are constantly playing out, as our uncomprehending ruling class stages displays of its own rank incompetence, its unfitness to govern. We might be excused for mocking the emperor’s new clothes. And we might be forgiven for relishing the public humiliation of the establishment’s hacks and shills, whether they be mainstream media figures and their hangers-on—foundation grifters who stake their reputations on the identity politics vulgate—or academic sheep who take themselves for lions, staking out ever-more-radical positions but always in terms designed to erase the class condition of society.

“In short, we might remind ourselves of what sort of time we are living through and how deeply the rot saturates all the institutions that legitimate class rule.”

— Roger Lancaster, Welcome to the New Legitimation Crisis: Bernie Sanders vs. the Plutocrats