“Right now you are losing to Joe Biden. Think about that.”

Last Thursday I watched a livestream of a Bernie Sanders rally in Arizona. There was a great band, lots of sign waving and roars of “Bernie, Bernie, Bernie!”

When he stepped to the podium the place went wild and the senator from Vermont waved to everybody, made a few introductory remarks, thanked everybody for coming and then did the oddest thing. He went into a spiel about what a “great guy” Joe Biden is and how he is a “good man”, a “decent man” and a “personal friend” with whom, yes, he had some disagreements, but on many of things they agree.  And then the oddest thing happened in my head. A form of cognitive dissonance snapped into place.

On the very day I had sent off another donation to his campaign and despite my strong support of Sanders since the 2016 election and my close understanding of his positions and record and familiarity with Joe Biden’s long, dank record (the Senator from MBNA bank) of doing the bidding of banks, credit card companies and close alignment with many Republican causes in the senate, including attacking Social Security, the oddest little message popped into my head: “Hmm, well, maybe Biden isn’t that bad after all! I mean, hell, even Bernie says he is a ‘good man’ and ‘friend'”

For anyone who understands the basics of neuroliguistics and the power of emotional frames they understand what happened. Hell, even I understood what happened, and yet that opening to Biden — planted by Sanders himself — remained sticky in my mind. It was there like a oil stain on the brain the next morning.

Now, there is no way I would vote Biden over Bernie in any dimension of reality I could imagine, and yet, there it was. Still is.

Such is the power of neurolinguist messaging. As neuroscientists have repeatedly shown, despite our belief of being rational, assessing creatures who consider the pros and cons and short, middle and long-term consequences before making a decision, 98% of our decision making is emotional, below the level of consciousness. Far more reflexive than what we think of as thoughtful. These reactions are triggered and set within emotional “frames” — think of it as a kind of stage that is pre-loaded with assumptions, beliefs and emotional connection. Madison Avenue has known, and profited off this stuff for 100 years.

Neuroscience scholar George Lakoff has written and spoken on this subject for years. His most popular book for layman gives an example of a frame in it’s very title: “Don’t Think Of An Elephant!”

When you read that direction to not even think of an elephant, what immediately pops to mind? An elephant, of course. Now some may see a circus elephant, others an African elephant that Donald Trump Jr. might happily gun down on a rich boy’s safari and others perhaps Dumbo. But everyone will have the image, memory and association — frame — of an elephant come to mind.

Sticky in the brain

So if Bernie says “great guy”, “good man”, “decent man” what are the frames that immediately come to mind for you? Perhaps it is your father or a favorite teacher or mentor and along with that will come a script full of assumptions and beliefs of someone really wonderful. So when Bernie used those words — frames — in reference to Biden, they stuck in my mind though I know from his record Biden is anything but “good” or “decent”. Just look to his record of serial lying for example, and you find a duplicitous man with deep character flaws.

And yet, that positive message of Biden remained sticky in my mind.

All this may seem esoteric and small, after all, facts and talking points win out, right? Wrong. Progressives are quick to have their talking points, charts and graphs and position papers or thoroughly footnoted Warrenesque plans — and they may even all be great — but they are repeatedly neutered by conservative frames of “welfare reform”, “pro-choice”, “personal responsibility”, “right to work”, “national defense”, “free market” and dozens more.

While Trump and his Republican minions roar across the political landscape on a noisy, belching Harley Davidson of nuerolinguistic messaging, dems struggle to stay upright on a rickety tricycle.

As smart and gifted a politician and orator as Bernie Sanders is — a man I greatly admire — he undermines his own efforts with his laudatory “I like Joe” language.

Time to take the gloves off, Bernie

Self-proclaimed “jagoff” comedian Jimmy Dore actually did a good job of addressing the impact of Bernie’s Biden references in a recent episode of “The Jimmy Dore Show” on the day of the corporate dem Super Tuesday putsch, which you can link to here.

Now warning, Dore is a night club comedian, so the language on the video gets a little rough.

Dore, correctly, said Bernie and all of his campaign staff , “Need to take the godamn gloves off and enough with this Joe f____ing Biden ‘friend’ shit. And he’s got to call out the establishment democratic party constantly because that is what this is and he’s gotta talk about their collusion with the establishment corporate media.”

He warns, and it was borne out on Super Tuesday: “You can’t play footsie with the establishment because they will crush you anyway.”

Politics is, has been and always will be about emotion. It is time for the Sanders campaign to step up to that reality and give voters and supporters a stronger, sharper emotional connection to support the campaign. As great a campaign and movement as they have created, the small turnout of young voters to date is more than a disappointment.

While the selective shutting down of polling stations in states like California and Texas wounded Sanders’ campaign, the candidate’s own mollycoddling of ‘Status Quo Joe’ is also a problem.

Oh, look, I just gave you a frame, which I picked up off an NPR interview with a carpenter in Michigan: Status Quo Joe

Feel free to use it.

(Repetition is also part of neurolinguistics.)

To learn more about neurolinguistics, political framing and communication, link to the Commoner Call’s “Your Brain On Politics” story & resource archive, HERE.

In additon to “Don’t Think Of An Elephant” George Lakoff wrote a wonderful little neurolinguistic hand book for democrats: “The Little Blue Book: The Essential Guide To Thinking & Talking Democratic” 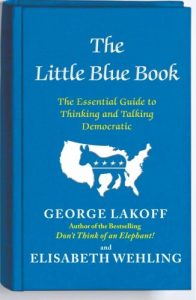