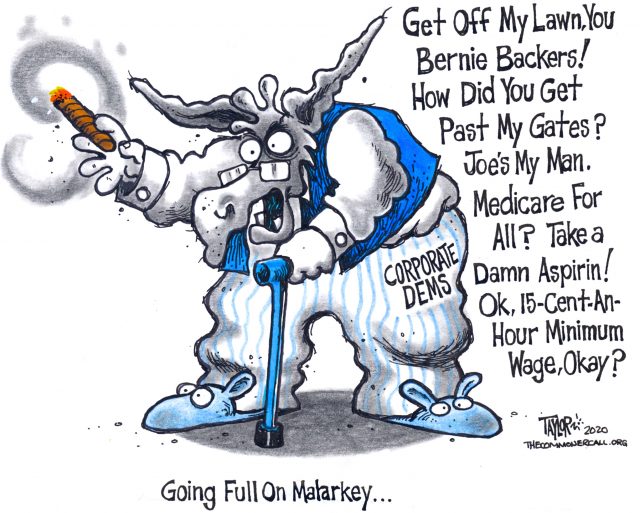 Climate activist Greta Thunberg was recently the target of a crude, sexually abusive graphic sticker put out by X-Site Energy Services, an Alberta, Canada oil field company. The sexual abuse launched at the 17 year-old has prompted an online petition (which you should definitely sign, here) and a call for the company’s bullying board to resign.

Displaying poise and wisdom far beyond the oil company management team, Thunberg had the perfect response to such abusive behavior, noting in a weekend tweet: “They are starting to get more and more desperate… This shows that we’re winning.”

A quick visit to the X-Site Energy Services web page Wednesday found a full screen panicky apology and pledge that “We will do better.” Other than the pleading apology, their entire website is shutdown. An example of abusive power in retreat.

While comparison of the entrenched corporate dem establishment, Wall Street and corporate media to the crude attack lobbed at Thunberg to what happened leading up to Super Tuesday is not perfect, her insightful observation of a “desperate” power under fire and coming to the end of its grubby lifespan is appropriate.

The corporate dems know that as big of a dunderhead as Donald Trump is, he is simply “a” problem; that he is not “the” problem. “The” problem is the bipartisan corporate racket that burped up Trump — and them — in the first place.

In quick succession over the two days leading up to the Tuesday vote we had both Mayor ‘Platitude’ Pete and Sen. Amy Klobuchar abruptly shut down their campaigns and — in separate events, no doubt having to do with the reported ill will between them — rushed in to endorse Joe Biden. Then we had hyperactive Beto O’Rourke come breathlessly jogging in from whatever Texas asham he has been hiding out in to endorse Biden.

On Wednesday, Michael Bloomberg stepped away from his gleaming Ego Express To Nowhere after dropping half-a-billion dollars in 100 days, leaving the oily corporate waters calm for Biden. Just as his buddies the Koch brothers did with the Republican party, Mike is making his move on acquiring the democratic party.

And Obama makes his move

Throughout it all, we heard scattered reports of Barack “Not So Much Hope & Even Less Change” Obama quietly working the phones. My guess is the corporate donors, banksters, grifters and money hustlers funding both parties were exerting a little — ahem — persuasion on all their ‘moderate’ employees running for the nomination.

“Yes, Obama, not as king maker but as minion to the fossil fuel, nuclear, military industrial, pharma, insurance, medical equipment and Wall Street complex, he was the one who pulled the strings and I, for one, was not hoping he would get involved.”

However it unfolded, one has to acknowledge the corporate dems were successful; probably beyond their wildest hopes, as Biden nailed down ten states, to Bernie Sanders’ four. The final delegate count will shake out as votes are tallied over the next day or so. But bottom line, the corporate dem establishment did what they do best: Shield and protect their privilege and wealth.

Corporate dems and their big money backers — the establishment — had such a good night TV pundits were, once again, left spending an election night parsing numbers and scratching their tummies trying to figure out, “What the hell just happened?!”

Tuesday went great for the oligarch express, but how can any of them relax — I mean, really — knowing that their guy is Joe Biden, one of the most inept, flap jaw, bumbling characters to ever trip across the national political stage. I mean, at any minute, at any event, debate, interview or just getting handsy with the wrong person, Ol’ Joe can leave everyone wondering: WTH? And in debate with Trump? And more Burisma probes and scammer son Hunter. Yikes!

They gotta’ be thinking late at night when the castle is locked down and quiet: “Joe Biden? This is what we are down to?”

The scam is unraveling

But what is interesting about it all is how blatantly the corporate dem establishment wielded their power; usually this stuff unspools in the legendary smoke-filled back rooms. But this week it was out in the open, covered in real time on cable news. In their panicky desperation — God, what if Sanders sweeps Super Tuesday? — they openly revealed their weak, palsied  hand.

Clearly, the support for a democratic socialist within the party and the bubbling rage and disgust for the bipartisan corporate abuse of the middle class and poor has them rattled. In 2016 Hillary got 63 million votes. Trump 60 million. And 100 million stayed home. As people suffer and the climate emergency ratchets upward, any tattered remnant of legitimacy of the empire’s establishment is unraveling. The scam is collapsing and those with the wealth are getting nervous. As well they should.

The corporate dems know that as big of a dunderhead as Donald Trump is, he is simply “a” problem; that he is not “the” problem. “The” problem is the bipartisan corporate racket that burped out Trump — and them — in the first place. And that is what more and more people are beginning to see and call out. And that has made them desperate. The con has about run its course. That’s making them nervous.  So, desperate, they show their hand .. er, paw.

We all got a front-row seat witnessing just how scared and frantic the corporate dem establishment is — just like the boys at X-Site Energy Services up in ol’ Alberta — as they are beginning to grasp just how hated they are. People aren’t buying what they are hustling. The world is moving out from beneath their clawed toes. While certainly the corrupted servants, boot licking sycophants and the Wall Street owners of the corporate dem establishment had a good night Tuesday, take heart, the actions of the power abusers reveal they are afraid of us. This is no time to let up. In fact, it is time to double down.

In the words of climate warrior Greta Thunberg: “They are starting to get more and more desperate… This shows that we’re winning.”

(Commoner Call column and cartoon by Mark L. Taylor, 2020. Open source and free for non-derivative use with link to www.thecommonercall.org )