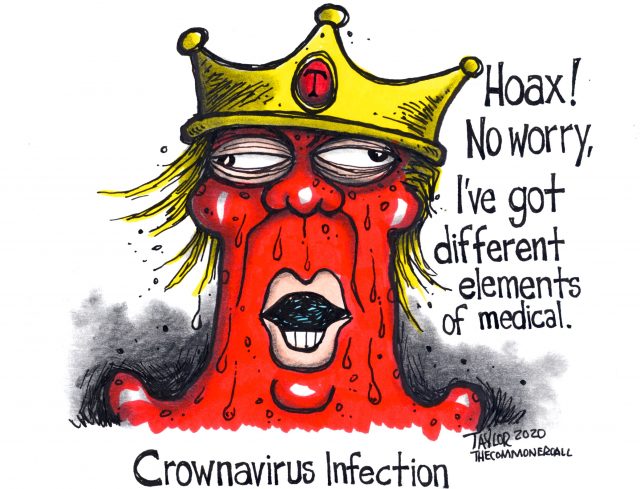 “This is their new hoax.”

“How could anyone refer to this as a ‘hoax’?! I never referred to [the coronavirus] as a ‘hoax’.”

Everything is seen and presented through a Party of Trump reelection lens. Trump holds campaign rallies promising protection of Social Security and Medicare and Trumpsters cheer. The reality is Trump proposed a budget for cutting both. Campaign rallies promising protections for medical insurance for persons with preexisting conditions and Trumpsters cheer. While Trump and his personal lawyer attorney general William Barr did successfully get SCOTUS to delay hearing the case to undo the preexisting conditions protections until after the 2020 election so as not to publicize Trump’s lie.

Trump is recklessy endangering lives. Trump downplays the risk of a pandemic while simultaneously falsely blaming Democrats for driving down the stock market and raising fears of a global pandemic – to make him look bad. Trump plays down the risk while the World Health Organization raises their risk assessment to “very high”, just short of declaring a pandemic.

And the Party of Trump follows wherever he leads. Trump’s Coronavirus Czar VP Mike Pence goes on Sunday Fox News to mislead about having screened 47,000 persons at airports when asked about the lack of Coronavirus testing kits. Taking a person’s temperature is not Coronavirus testing.

““The reason you’re seeing so much attention to it today is that they think this is going to be the thing that brings down the president,” Mulvaney said. “That’s what this is all about it.”

“He added: “The flu kills people. This is not Ebola. It’s not SARS. It’s not MERS. It’s not a death sentence. It’s not the same as the Ebola crisis.””

Trump Sec. State Pompeo is holding to his Trump-Ukraine form of denial and insulting the person asking the question. Pompeo refers to a House Foreign Affairs Committee hearing question about Coronavirus as a ‘gotcha question’ and refuses to answer.

Like Trump-Russia and Trump-Ukraine, we even have a whistleblower who sees this route as their only path to publicize lack of preparedness.

“Staff members from the Department of Health and Human Services’ Administration for Children and Families were sent to Travis Air Force Base and March Air Reserve Base in late January and early February and were ordered to enter quarantined areas, including a hangar where coronavirus evacuees were being received, the complaint said. They were not provided safety-protocol training until five days into their assignment, said the whistle-blower, who is described as a senior leader at the health agency.”

Even the farthest right of the far right Trump advisers Stephen Miller gets in the game.

The pattern is repeated, again. Trump-Russia, Trump-Ukraine, Trump-Coronavirus. Trump’s Sharpie-gate lying about hurricane Dorian warnings of an imminent strike to Alabama was not in the same league, but fits the familiar pattern – everything is seen and responded to through a Trump reelection filter. As with the opening comments, even a lie is lied about soon thereafter.

While the US experiences our first Coronavirus death, in addition to new cases not easily linked to overseas exposure, Trump et al risk a possible panic in addition to a pandemic because of Trump’s deranged statements and downplaying risk.

But don’t worry, Trump is taking proper precautions – for himself. While we are told Coronavirus is a hoax (Twitter reports 2 million such tweets over the last few weeks) Trump has decided to call off a March meeting with Asian leaders in Las Vegas.

Also don’t worry, Pence is tackling the Coronavirus challenge with the same tools he uses to fight gun violence – prayers. Here’s his prayer session with his Coronavirus task force.

While Coronavirus dominates the headlines, there are still Trump-Ukraine loose ends to wrap up.

Catch-22 – never about the crime, just about lies and legal process. So what investigative options does Congress have?

And one more, remember how Trumpsters’ Trump-Ukraine defense was about Trump as a corruption fighter – not the King of Corruption. Trump was chasing the most notoriously corrupt individual ever – Hunter Biden. Who? You might tempted to say. But given former VP Biden’s South Carolina primary, we may well hear more in spite of this warning as this recent report suggests:

“…“I think it’s amazing that people are still potentially viewing manipulated Ukrainian information. That is not in our national security interest,” Senate Intelligence Committee Vice Chairman Mark Warner (D-Va.) said. “There is plenty in the public domain that Russia was behind a lot of these fables and stories.”’

Trump-Coronavirus fits the recurring pattern of Trump putting us all at increasing risk for his own personal gain. Disagree? Consider this – your rural hospital may disappear, Coronavirus may be the tipping point as these hospitals scramble for preparedness and postpone profitable elective surgeries like knee-operations. For those of you familiar with Vernon Memorial Hospital in Viroqua, Wisconsin you understand this risk.

Trump’s disinformation stoops as low as his Friday press conference where he failed to mention the first US Coronavirus fatality while suggesting victory was at hand – his hand, “And again, when you have 15 people — and the 15 within a couple of days is going to be down to close to zero — that’s a pretty good job we’ve done,” he said.

But on Sunday we learned that the Coronavirus death in Washington state is an indication that transmission has been going on for weeks “with hundreds of infections likely in the state”.

Meanwhile, Trump’s protectors, the US Senate, the Department of Justice, federal courts, even the Supreme Court have his back. And Trump rally attendees cheer Trump assurances that Coronavirus is a hoax.

In our lifetime we have never faced such a dangerous and reckless domestic leader.

Coronavirus: How The Deadly Epidemic Sparked A Global Emergency

This BBC documentary includes dramatic video from inside Wuhan, China.