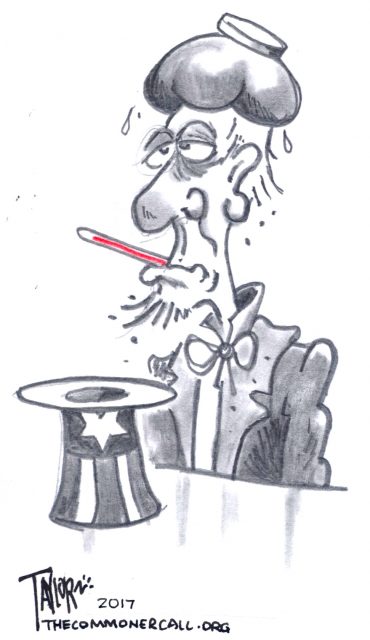 COVID-19 is going to swing a big hammer at the glass house of American health care. All anyone can do is hope they don’t get cut in the process. And then vote to change the damn system.

For four decades, American corporations have been caught up in a whole series of refinements that are intended to improve efficiency and productivity. Our processes are lean. Our efficiency is six-sigma. Our productivity has mysteriously run far ahead of employee compensation in a way that has made CEOs billionaires while leaving workers on food stamps.

It’s a system that maximizes profit. But it’s also a system that assumes that everything can be stripped to the bare bones; that business can make do with minimal staffing, minimal supplies, minimal alternatives. Nothing is there that makes the system in the least unprofitable. The system stands like a house of glass, waiting for something to challenge its fragility.

And in the United States, health care is just that kind of system.

It’s an absolute certainty that Americans will hide their sniffles, drown their symptoms in over-the-counter drugs, and try to “tough it out” because they can’t afford health care. Besides, they have no paid sick leave, no paid child care, and no guarantee that missing a day’s work won’t mean being cast to the curb. All that “socialist” crap.

Like every other system in America, we now have a super-lean, infinite-sigma healthcare system, absolutely dependent on every cog remaining in place. It’s one in which there are fewer than a million hospital beds for the entire nation; one in which many, many rural counties have no hospital at all. Because that’s the most profitable way of running the system, and that’s what happens when health care is subjected to the winnowing of the marketplace—just barely enough health care, at the highest possible prices people will tolerate without demanding a change.

It’s exactly where a nation does not want to be when encountering a health crisis. And it’s why America is, unfortunately, about to get a lesson in why there is much more to a national health system than whether you pay for it in taxes or with checks to an insurance company.

In the 1960s, astronauts used to joke about flying on a giant rocket built by a collection of contractors who submitted the lowest bids. But NASA had a safety culture then, and now, that demanded each of those components be tested and retested until its function was as near certain as possible. A spacecraft is the opposite of “lean,” with a backup, and a backup, and a backup to the backup’s backup at every possible point—and a massive staff of very smart people standing by to get creative if Murphy scores a perfect strike.

Failure is an option

None of this is true for our healthcare system. Failure very much is an option at every clinic and hospital in America. A certain level of failure is even assumed. Building a system with redundancies and experts who were not always pushed to their absolute limits would cost more. Every intern, doctor, and nurse (especially nurse) who you ever met was overworked, because running the system on the ragged edge of failure is exactly the sweet spot. Or at least it is as far as corporations whose goal is to milk every penny from the process are concerned. In the average hospital visit, there are more people involved in billing you than in treating you.

While stipulating that a University of California at Davis medical facility is “generally better prepared and equipped” than most when it comes to dealing with such a situation, National Nurses United—the largest nurses union in the United States—warned Friday night that the self-quarantine of 124 healthcare workers there shows the nation’s hospitals remain seriously unprepared for the coronavirus that officials warn is rapidly spreading.

According to the NNU, a single case of coronavirus (also known as COVID-19)—in which a patient was admitted on Feb. 19—has now resulted in the quarantine of 36 registered nurses and 88 other health care workers at the UC Davis Medical Center, all them now at home in order to limit the risk of further spread.

“These 124 nurses and health care workers, who are needed now more than ever, have instead been sidelined,” the union said in a statement. “Lack of preparedness will create an unsustainable national health care staffing crisis. Nurses view the handling of this COVID-19 case as a system failure and not a success.”

The Washington Post reports Saturday, citing latest figures from  the Centers for Disease Control and Prevention, that “four new cases Friday brings the total number of covid-19 cases detected through the U.S. public health system to 19.”

The NNU said its nurses are speaking out now because they are “dedicated to protecting the health and safety of their patients, health care workers, and the public.” It also comes as President Donald Trump, at a rally in South Carolina on Friday night, accused Democrats and others criticizing his administration’s handling of the crisis—of which there are many—of perpetrating a “new hoax” against him.

While it is waiting for more complete results of a survey sent out to nurses in hospitals across the country, the NNU said preliminary responses from 1,000 members in California found:

In addition to the survey, NNU said it has sent letters to the federal Centers for Disease Control to request strengthening its guidelines on COVID-19, and to the California Department of Public Health, Cal-OSHA, and the World Health Organization outlining its concerns and offering recommendations so that nurses, support staff, and the public at large are better protected.

“The patient was transferred to UC Davis on February 19 from a Northern California hospital. Officials from both hospitals said the patient wasn’t initially tested for the virus because she didn’t meet the existing CDC criteria.

“The patient didn’t have any relevant travel history or exposure to another known patient, said Dr. Sara Cody, director of the county’s public health department.

“Confirmation that the Solano County woman had contracted the virus came Sunday after UC Davis doctors insisted on testing.”

The nurses union said that its members within the UC hospital system over recent weeks had gone to officials, including at Davis, demanding that existing protocols for infectious diseases be put in place but that those requests were not met.

“We know that we can be successful in getting all our hospitals prepared to control the spread of this virus,” said Bonnie Castillo, and RN and NNU’s executive director. “We are committed to working with hospitals and state and federal agencies to be ready. But nurses and health care workers need optimal staffing, equipment, and supplies to do so. This is not the time for hospital chains to cut corners or prioritize their profits. This is the time to go the extra mile and make sure health care workers, patients, and the public are protected at the highest standards.”