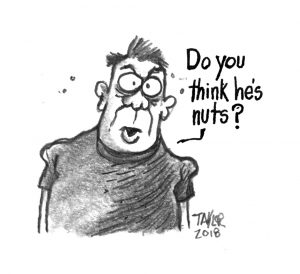 “U.S. health authorities, managing 59 cases so far – mostly Americans repatriated from a cruise ship in Japan – have said a global pandemic is likely.”

Is the Coronavirus Trump’s — and our — Katrina moment? Is this the crisis we hoped we’d never have to experience with Trump in the White House? To date Trump has ‘led’ a US response to a possible global pandemic with the typical skills he brings to the job every day – bad information and blaming others.

On February 13 Trump shared more advice from Xi, noting, “that the new coronavirus would “go away” in April, as temperatures warm”. Columbia University epidemiologist Stephen Morse described this as “wishful thinking”.

The February 24th article from Reuters has Trump doing what Trump does – pointing fingers and trying to reassure the equity markets:

“But President Donald Trump accused cable TV channels that frequently criticize him of “doing everything possible to make (the coronavirus) look as bad as possible, including panicking markets.””

The Coronavirus is very much under control in the USA. We are in contact with everyone and all relevant countries. CDC & World Health have been working hard and very smart. Stock Market starting to look very good to me!

The public should not buy his glib and dangerous dismissals, Wall Street did not buy his irreverent assurances, “…it’s fallen more than 6% in just the last two days”.

On February 25 Trump predicted from India, the coronavirus is “going to go away”. The same CNN report has Trump asking Congress for $1.25 billion in emergency funding. but that follows Trump’s proposed 16% budget cut do the Center for Disease Control (CDC).

Trump’s point person is the acting head of The Department of Homeland Security (DHS) Chad Wolf who appeared before a Senate appropriations committee meeting on Tuesday. It is not an exaggeration to say that Wolf had no answers to basic questions, but don’t take my word for it, here’s Sen. John Kennedy (R-LA):

“I’m asking you questions because you’re the secretary of the Department of Homeland Security,” Kennedy shot back, “and you’re supposed to keep us safe. And you need to know the answers to these questions.”

Wolf incorrectly answered or had no answers to Kennedy’s questions regarding the number of coronavirus cases reported in the US, how many cases DHS was anticipating (“we do not anticipate the number will grow”), how the virus was transmitted (“a variety of ways”), the mortality rate for coronavirus (incorrectly equating it to influenza rates in the US over the last 10 years; actual is 1 in 50 vs. 1 in 1,000), and timing of a vaccine to fight coronavirus. Kennedy ended, with “…you’re supposed to keep us safe. And you need to know the answers to these questions.

A similar report from Truthout.org shared a prediction by Harvard epidemiology professor Marc Lipsitch (from The Atlantic):

“Lipsitch estimates that 40% to 70% of the world population will become infected with the virus, though he stressed that many of those will not become seriously ill. The virus appears to have a fatality rate of around 2%…”

Trump is scrambling by requesting emergency funds, but he is not leading, he’s reacting:

“Sen. Chris Murphy, D-Conn., added that not only did Trump “put no one in charge” of efforts to fight the virus and pushed for cuts, he also “shut down 37 of 47 global anti-pandemic programs.”

And now, with Trump doing a late-afternoon Wednesday news conference, we have the latest news: Trump now announces $2.5 billion in funding including money for vaccine development. Trump also announced that VP Mike Pence is now in charge of the administration’s response to the coronavirus.

As Trump was talking the Washington Post issued an alert/update: First U.S coronavirus case of unknown origin confirmed in Northern California, a sign the virus may be spreading in a local area.

While Trump stated there were 15 cases being treated in the US the Washington Post article says there are 60 confirmed cases.

All of this is happening against a backdrop of only 31% of Americans trusting Trump.

The smartest thing each of us can do for ourselves is to be prepared. I highly recommend the CDC site for Coronavirus Disease 2019 (COVID-19) which gives latest updates as well as guidance on how we can protect ourselves, because Donald Trump certainly isn’t going to.