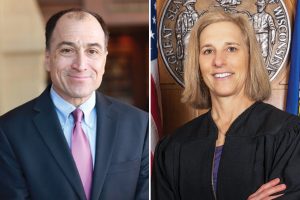 The state Supreme Court race is an extremely important upcoming election, since it is for Wisconsin’s ultimate judicial body, and it is for a 10-year term. Two of the three candidates would make excellent justices, so the Shepherd Express enthusiastically endorses both Ed Fallone and Jill Karofsky for Wisconsin Supreme Court.

The third candidate is a Scott Walker appointee, Daniel Kelly, who is an extreme rightwing ideolog. It’s not an exaggeration to say that he may be one of the most rightwing justices to ever sit on the Wisconsin Supreme Court. He’s a graduate of Regent University Law School, which is a rightwing, fundamentalist Christian university founded by TV evangelist Pat Robertson, and unfortunately, Kelly carries his extremely conservative values onto our Supreme Court. It is so disingenuous to listen to Kelly talk about how his opponents are some kind of judicial activists when it is he who is the rightwing judicial activist. Please take this race seriously, because it is.

Fallone is a distinguished law professor at Marquette University and has practiced law for more than 25 years in both federal and state courts, focusing on nonprofit, corporate and academic law. In his years in the legal system, he focused on the needs of the Latino community and low-income and middle-income individuals. Fallone is endorsed by Milwaukee Mayor Tom Barrett, Milwaukee County District Attorney John Chisolm, Milwaukee County Sheriff Earnell Lucas, State Senator Chris Larson, the American Federation of Teachers (AFT) Local 212, State Rep. David Crowley, State Rep. Evan Goyke and others.

Karofsky has worked as an assistant attorney general serving as the state’s Violence Against Women resource prosecutor and as a Dane County’s deputy district attorney prosecuting felonies and misdemeanors. She also served as executive director of the Wisconsin Office of Crime Victim Services. She has earned many awards for her work against domestic violence and for her volunteer service. Karofsky is endorsed by Women Lead, the American Federation of Teachers (AFT) Local 212, president of the IBEW Wisconsin State Conference Don Allen, Wisconsin Supreme Court Justice Rebecca Dallet and others.

Please vote for either Ed Fallone or Jill Karofsky for Wisconsin Supreme Court Justice on Feb. 18.