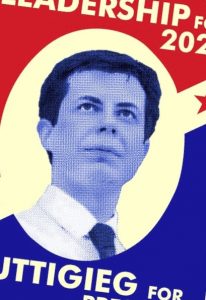 So much for freedom of speech and open election discourse in public places.

[Editor’s Note: Oh, you gotta’ look at the photo of Buttigieg that accompanies the link below. In fact, take a close look at the photo above. And the campaign promoted that image. Perhaps a rare dollop of campaign truth? Would you buy a used car from this guy? — Mark L. Taylor]

You’d think that a presidential campaign backed by 40 billionaires and untold numbers of bundled rich people wouldn’t worry about just one leaflet on Medicare for All.

But minutes after Pete Buttigieg finished speaking in an auditorium at Keene State College in New Hampshire on Saturday, a Pete for America official confronted me outside the building while I was handing out a flier with the headline “Medicare for All. Not Healthcare Profiteering for the Few.”

“You can’t pass that out,” the man told me. I did a double take, glancing at the small “Pete” metal badge on his lapel while being told that he spoke on behalf of the Buttigieg campaign.

We were standing on the campus of a public college. I said that I understood the First Amendment. When I continued to pass out the flier, the Buttigieg campaign official (who repeatedly refused to give his name) disappeared and then quickly returned with a campus policeman, who told me to stop distributing the leaflet. Two Keene city police soon arrived.

Why would a representative of the mighty Buttigieg campaign resort to such a move? A big clue can be found in a deception that Buttigieg engaged in during the debate on Friday night.

The Buttigieg official stood a few feet behind them as the police officers threatened me with arrest for trespassing. Ordered to get off the campus within minutes or be arrested, I was handed an official written order (“Criminal Trespass Notice”) not to set foot on “Keene State College entire campus” for a year.

So much for freedom of speech and open election discourse in public places.

Why would a representative of the mighty Buttigieg campaign resort to such a move? A big clue can be found in a deception that Buttigieg engaged in during the debate on Friday night.

Buttigieg’s dishonesty arose when Amy Klobuchar, a vehement foe of Medicare for All, attacked Bernie Sanders for allegedly seeking to “kick 149 million Americans off their current health insurance in four years.” Klobuchar was reciting a key insurance-industry distortion that neglects to mention how a single-payer system would provide more complete health coverage, at less cost—by eliminating wasteful bureaucracy and corporate profiteering.

But Klobuchar then pivoted to attack Buttigieg: “And Pete, while you have a different plan now, you sent out a tweet just a few years ago that said henceforth, forthwith, indubitably, affirmatively, you are for Medicare for All for the ages—and so I would like to point out that what leadership is about is taking a position, looking at things, and sticking with them.”

Buttigieg was far from candid in his response: “Just to be clear, the truth is that I have been consistent throughout in my position on delivering healthcare for every American.”

That answer directly contradicted an early 2018 tweet from Buttigieg: “Gosh! Okay. . . I, Pete Buttigieg, politician, do henceforth and forthwith declare, most affirmatively and indubitably, unto the ages, that I do favor Medicare for All, as I do favor any measure that would help get all Americans covered.”

No doubt if the flier (pdf) I was handing out at Keene State College had praised Buttigieg, his campaign would not have called the police to have me ejected. But the Buttigieg for President staffer recognized that Buttigieg’s spin on healthcare was undermined by facts in the flier (produced and financed by RootsAction.org, which is completely independent of the official Sanders campaign).

“Buttigieg is claiming that Medicare for All would dump people off of health coverage and deprive them of ‘choice,’” our flier pointed out. “Those are insurance-industry talking points. He is deliberately confusing the current ‘choice’ of predatory for-profit insurance plans with the genuine full choice of healthcare providers that enhanced Medicare for everyone would offer.”

Apparently, for the Buttigieg campaign, such truthful words are dangerous.

In Historic Shift, Second Largest Physicians Group In US Has New Prescription: It’s Medicare For All

“Major changes are needed to a system that costs too much, leaves too many behind, and delivers too little.”

The fight for Medicare for All received a two-handed boost from tens of thousands of doctors on Monday when the American College of Physicians—in a move described as a “seachange for the medical professions”—officially endorsed a single-payer system as among only one of two possible ways to improve the nation’s healthcare woes.

Representing 159,000 doctors of internal medicine nationwide, the ACP is the largest medical specialty society and second-largest physician group in the country overall after the American Medical Association (AMA).

The ACP delivered its case in a 43-page position paper—titled “Envisioning a Better U.S. Health Care System for All: Coverage and Cost of Care“—published in the Annals of Internal Medicine on Monday. According to the paper:

“Although the United States leads the world in health care spending, it fares far worse than its peers on coverage and most dimensions of value. Cost and coverage are intertwined. Many Americans cannot affford health insurance, and even those with insurance face substantial cost-related barriers to care. Employer-sponsored insurance is less prevalent and more expensive than in the past, and in response, deductibles have grown and benefits have been cut. The long-term solvency of U.S. public insurance programs is a perennial concern. The United States spends far more on healthcare administration than peer countries. Administrative barriers divert time from patient care and frustrate patients, clinicians, and policymakers. Major changes are needed to a system that costs too much, leaves too many behind, and delivers too little.”

Sen. Bernie Sanders (I-Vt.), a leading candidate for the 2020 Democratic presidential nomination and the author of the The Medicare for All Act of 2019 now in the U.S. Senate, welcomed the development. …