Trump was Impeached by the US House, but acquitted by the US Senate. Acquitted for a crime that even he admits he committed – use of US foreign policy to extort a foreign government to personally benefit his reelection campaign.

Trump’s disregard for law and norms is a perfect example of the kind of high crimes and misdemeanors envisioned by the framers of our Constitution, with Impeachment by Congress as the remedy. Though the framers did not provide added safeguards should a complicit Party of Trump Senate or even a suspect Supreme Court decide to unilaterally ‘harrumph’ dismissal from their cloistered realm.

Let’s revisit the latest from Sen. Susan Collins who through detachment or selective ignorance assured us that surely House Impeachment was enough to chasten Trump’s ‘exuberance’. How quaint; sort of a boys-will-be-boys dismissal. Just like her suggestion Trump apologize to all of us. Much like Russian interference in the 2016 election to benefit him, Trump operates in his tyrannical reality; only possible if his lies are repeated, amplified and combined with punishment for anyone saying otherwise.

Humility vs. Hubris: Clinton, Trump in their own words post-impeachment

MSNBC Morning Joe laid out a side-by-side comparison of the remarks offered post-Impeachment-acquittal by former president Clinton and Trump. Clinton, in a 96-second speech got to the point – us. Trump in an hour-long rant got right to his point – Trump, and all the ways he complained of being unfairly maligned.

But back to Collins, she didn’t just walk away; she did choose to involve herself in protecting those she sees as wronged by Trump’s crimes. No, she didn’t protect us, that was not her instinct.

And — No — Collins did not try to save heroes and whistleblowers, like Lt. Col. Alexander Vindman, a veteran of several combat tours in Afghanistan and recipient of a number of military honors, including a Purple Heart for his bravery protecting his nation. Or his twin brother, Yevgeny Vindman, another military officer with a distinguished record.

Collins did rise to protect multimillionaire Gordon Sondlund, the guy who bought an ambassadorship to the European Union through a $1 million donation to Trump’s inauguration fund and — under pressure — testified in the House impeachment hearings. The donation worked, though again — as NeverTrumper pundit Rick Wilson frequently points out — ‘everything Trump touches dies’.

A handful of Republican senators tried to stop Trump from firing  Sondland, but the president bounced the diplomat out of his post anyway, according to people briefed on the discussions.

Here’s Collins along with our Sen. Ron Johnson (R-WI), on the wrong side of the conversation as always:

“Among the Republicans who warned the White House was Senator Susan Collins of Maine, who after voting to acquit Mr. Trump said she thought he had learned a lesson. Others included Senators Thom Tillis of North Carolina, Martha McSally of Arizona and Ron Johnson of Wisconsin.”

Collins only dug a deeper hole by trying to explain that while she hoped Trump learned he “should not enlist the help of a foreign government in investigating a political rival”, she wanted to make sure she was okay if Trump chose to “fire people who testified in a way that he perceived as harmful to him.” Lest you be tempted to think Collins found a moment of fairness, she wanted to make sure the audience-of-one knew she was solidly in the fold of ‘believers’. 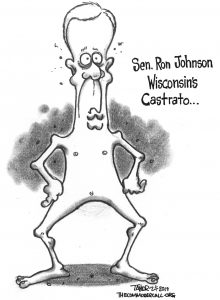 Circling back. There are many that somehow don’t hear the one Truth Collins did at least underscore – that Trump did it. Many only hear Trump’s barrage of heated and tweeted denials disregarding his 15,000 lies (to date) for whatever emotional reasons that are comforting to them.

But EVEN FOX NEWS doesn’t buy it, they know he did it…

I hope you read this, I will only highlight that Fox News has a 162-page research of all things Ukraine that is damning of Trump’s, and Fox News amplifications, conspiracies to push the truth out of the news, his guilt, and replace it with a false narrative that whatever was done was done ‘to him’, not ‘by him’. There is a useful summary of the voice that was the original ‘useful idiot’ for Trump’s lies, former opinion writer for The Hill, John Solomon. Solomon was a Fox News contributor who in 2019 “published 45 columns aimed at discrediting the Russia investigation, 12 of which focused primarily on Ukraine.”

Solomon aside, it’s Trump lawyer Giuliani who is ‘boots on the Ukraine ground’ along with indicted associates Lev Parnas and Igor Fruman as well as other Trump lawyer attorney general William Barr that are striving to turn discredited Ukraine straw-lies into Trump acquittal-gold.

The Billion-Dollar Disinformation Campaign to Reelect the President

Much like most people ‘knew’ Trump couldn’t win, we ‘know’ we aren’t influenced by propaganda. After all, that’s the stuff of 2nd or 3rd world countries, or maybe conspiracy enthusiasts, but not us. Right? Well, maybe not.

There is much here to consider. MUCH to consider, but think of the tut-tuts that are sometimes offered over Trump-Russia and how little Russia actually did. This is always layered lies and distortions and selective ignoring of facts, but also consider how a ‘little’ can have great impact:

“Central to that effort is the campaign’s use of micro-targeting—the process of slicing up the electorate into distinct niches and then appealing to them with precisely tailored digital messages. The advantages of this approach are obvious: An ad that calls for defunding Planned Parenthood might get a mixed response from a large national audience, but serve it directly via Facebook to 800 Roman Catholic women in Dubuque, Iowa, and its reception will be much more positive. If candidates once had to shout their campaign promises from a soapbox, micro-targeting allows them to sidle up to millions of voters and whisper personalized messages in their ear.”

While we’re here, I’ll offer this reminder – don’t count on bazzilionaire and Facebook founder/CEO Mark Zuckerberg to help. He’s already said he won’t police lies put forward (paid for) by political groups. Just one of his many careful attempts (chicken shit) to appease and avoid the wrath of Trump.

The Senate in the shadow of heroes

Sen. Susan Collins and many other Party of Trump Senators are quick to tell us that many serve at the discretion of Trump so… I guess it’s okay for him to be as vindictive as he chooses.

As mentioned above, Purple Heart recipient Lt. Col. Vindman was reassigned, as was his twin brother who was never directly involved. Sondland is out, but let that door hit him in his complicit ass on the way out. Trump chief of staff Mick Mulvaney is back in the whisper mix to now be another head-on-pike. Even the inspector general for the intelligence community, Michael Atkinson, who allowed the whistleblower complaint to be sent to Congress as defined by law, is a candidate for ‘head-on-pike’.

Many who told the truth at their own peril have left government already and I add them in honor of their actions: Ukraine Marie Yovanovitch; William B. Taylor Jr; vice presidential aide Jennifer Williams; State Department official Michael McKinley; special envoy for Ukraine negotiations Kurt Volker; and NSC official Tim Morrison.

Party of Trump is big on rules when they are favored and not so keen on laws and rules when it is disadvantaged.

Trump offered personal defense Version 31 this week – “he had to do it”.

Keep in mind, many still mouth the denials or ‘no witnesses’ defense, but even Trump is beyond that. Now he offers, ‘HE DID IT’, but he had to:

“We even have a treaty — 2001, 1999 — it’s a treaty, signed treaty, that we will work together to root out corruption in Ukraine,” Trump said. “I probably have a legal obligation, Mr. Attorney [General], to report corruption.”

Like any Trump lie, his ‘it-was-the-law’, is utter nonsense. His lies only work out of ignorance or complicity.

And with that, on a final note, a reminder of the recurring nonsensical ‘no one is tougher on Russia’ – guess who is benefitting from Trump’s crippling sanctions against the Venezuelan people: In the U.S. embargo on Venezuelan oil, Russia is a clear winner.

I have touched on this before, noting that Putin lent money to Maduro’s government – with Venezuelan oil deposits as collateral. Now guess how that’s turning out. But in addition, “secret deals between Moscow and Caracas to produce, transport and sell oil to other markets have become a cash cow for Russia that is earning its state-controlled enterprises an estimated $120 million a month.”

There is only one way to get the government we want…

Let’s Win the 2020 election. Go here for a moment of inspiration from Rev. Dr. William J. Barber: The Impeachment Cover-Up Demands a Call to Action!