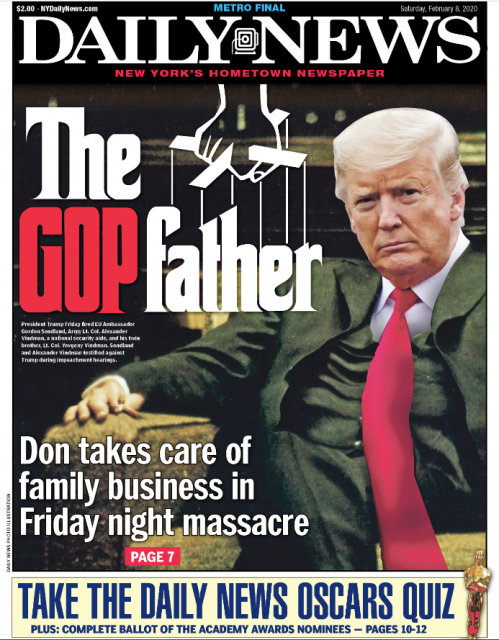 As threatened in what is likely the start of a vengeful new order, the impeached criminal, pathological liar, five-time draft dodger and vindictive gangster in power just had Lt. Col. Alexander Vindman, patriot and National Security Council Ukraine expert who testified about his high crimes in House hearings, physically removed from the White House – thus once again proving, said one sage, “You can serve honorably or you can serve Trump, but it is impossible to do both.” The son of Jewish refugees who came to the U.S. when he was three after his family fled Ukraine, Vindman served multiple tours overseas and was wounded by a roadside bomb in Iraq, earning him a Purple Heart. He went on to earn a master’s degree in Russian from Harvard, served at US embassies in Kyiv and Moscow and was highly regarded as the NSC’s top expert on Ukraine.

Going one vicious, Stalinesque step further, he also fired and removed Vindman’s twin brother Yevgeny, an Army lieutenant colonel who likewise worked at the White House but had nothing to do with the impeachment process.

As part of his duties, Vindman had listened in on the July call between Trump and the Ukrainian President; testifying under subpoena, he dared to say he felt it was “improper” for a so-called president “to demand a foreign government investigate a U.S. citizen and political opponent.” After his phony acquittal and his lying, cursing, bullying victory lap, Trump vowed vengeance against all his perceived enemies, with Vindman at the top of his squalid list. Going one vicious, Stalinesque step further, he also fired and removed Vindman’s twin brother Yevgeny, an Army lieutenant colonel who likewise worked at the White House but had nothing to do with the impeachment process. Among other things, both acts proved either the deep stupidity, or cynicism, or both, of Susan Collins and anyone else suggesting Trump is capable of learning his lesson, or anything else. Today, said former FBI Assistant Director Frank Figliuzzi, “It’s no longer the people’s house.”

To many, Trump’s petty, blatant act of retribution reaffirms what is the now-unstoppable corruption the GOP has unleashed; said one sage, “They will burn it all for Trump.” Especially unconscionably, it came against a decorated veteran and accomplished professional who for decades “has dutifully served his country and his President,” said Vindman’s attorney David Pressman in a powerful statement. “There is no question in the mind of any American why this man’s job is over…LTC Vindman was asked to leave for telling the truth. His honor, his commitment to right, frightened the powerful… He did what any member of our military is charged with doing every day: he followed orders, he obeyed his oath, and he served his country…And for that, the most powerful man in the world – buoyed by the silent, the pliable, and the complicit – has decided to exact revenge.”

No one left to warn us

Echoing Adam Schiff, Pressman ended with a searing charge about a likely rocky future. “In this country right matters, and so does truth,” he said. “If we allow truthful voices to be silenced, if we ignore their warnings, eventually there will be no one left to warn us.” Vindman, who will be assigned to a job at the Defense Department, hasn’t yet commented on his firing. But in his testimony before the House, he poignantly expressed his faith in his country to reassure his father. “Do not worry. I will be fine for telling the truth,” he said. “Dad, my sitting here today in the US Capitol talking to our elected officials is proof that you made the right decision 40 years ago (to come here) in search of a better life for our family.” Later, he was asked by a lawmaker why he wasn’t worried about repercussions. “Congressman, because this is America,” he said. “This is the country I’ve served and defended. That all my brothers have served. And here, right matters.” In the hearing room in what was once our country, applause broke out.

Update: Trump also just fired U.S. Ambasador to the EU Gordon Sondland, who testified against him. An adviser called both actions, “Flushing out the pipes. It was necessary.” Unhinged, unleashed, utterly.