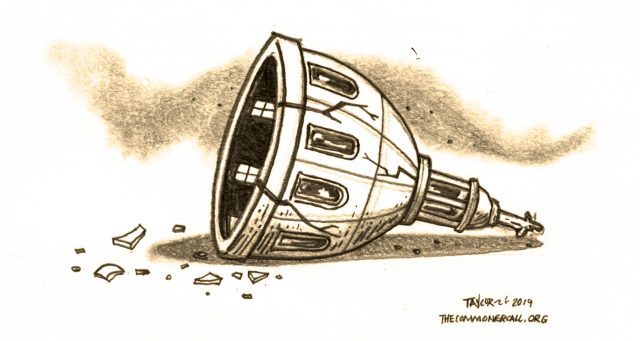 “Alas, no one ever lost money betting on the cynicism of today’s congressional Republicans.”

He did it; Trump did it. I’ll come back to this in a minute.

On Wednesday the Senate will vote to acquit Trump. The critical vote over whether witnesses would be allowed failed by a 51-49 vote. Don’t be fooled, the vote was not that close. Senators Susan Collins (R-ME) and Mitt Romney (R-UT) were the two Republicans who voted in favor of witnesses but Collins did so to get her Portland, Maine headline for her vote – which she got. For inside baseball, Commoner Call contributor Tom Crofton pointed out the Congressional parlance – she we given a ‘hall pass’. Two other possible ‘yes’ votes from Senators Lisa Murkowksi (R-AK) and Lamar Alexander (R-TN) were announced as ‘No’ votes well before the vote, giving Collins an out to suggest she’s a moderate, but remember to ask this staunch ‘women’s right to decide’ about her Brett Kavanaugh SCOTUS vote.

He did it. Trump has admitted this but more often he is the single voice saying he did not manipulate US foreign policy for personal 2020 reelection benefit. It’s hard to find anyone else that will carry his water with that lie. More realistically, and sadly, here’s a few gems of explanation:

So what do we conclude? He did it, it was wrong, it was an impeachable offense but don’t expect Senate Republicans to stand up, there was no Claude Reins moment from ‘Mr. Smith Goes to Washington’ where in the role of Sen. Joseph Paine, he burst into the Senate and declared (of Jimmy Stewart’s character):

No Claude Reins portrayals of Sen. Paine. No, just a few Republicans willing to admit that they chose the Party of Trump. In what should be the most embarrassing admission if there was such a Party of Trump thing, here’s Sen. Joni Ernst (R-IA) gushing over how they used the Trump Impeachment trial to ‘Benghazi’ or ‘but her emails’ presidential candidate Joe Biden:

Here’s what she said, but you really do have to watch her say it:

“Republican Sen. Joni Ernst told reporters that she is “really interested to see” how team Trump’s performance at the Senate trial “informs and influences the Iowa caucus voters, those Democratic caucus-goers.””

Trump did it! That’s old news, but here we have Bolton pointing out that Trump’s impeachment defense lawyer was a first-hand witness to Trump’s guilt. Imagine, the guy arguing against Impeachment witness, was a witness:

“Mr. Trump gave the instruction, Mr. Bolton wrote, during an Oval Office conversation in early May that included the acting White House chief of staff, Mick Mulvaney, the president’s personal lawyer Rudolph W. Giuliani and the White House counsel, Pat A. Cipollone, who is now leading the president’s impeachment defense.”

Okay, only one more nomination for most ‘shameless’:

“The (CNN) reports states, “The Department of Justice revealed in a court filing late Friday that it has two dozen emails related to the President Donald Trump’s involvement in the withholding of millions in security assistance to Ukraine — a disclosure that came just hours after the Senate voted against subpoenaing additional documents and witnesses in Trump’s impeachment trial, paving the way for his acquittal.””

To be clear, “…should stay confidential because the emails describe ‘communications by either the President, the Vice President, or the President’s immediate advisers regarding Presidential decision-making about the scope, duration, and purpose of the hold on military assistance to Ukraine.’”

They want us to believe he did it for us, rather than to us.

The opening quote above was from the New York Times Editorial Board denouncing the abdication of the Republican Senate. Maybe not worthy of a nomination for ‘shamelessness’, the Opinion piece reports Sen. Murkowski just rolled over and said, what’s the point:

“I don’t believe the continuation of this process will change anything. It is sad for me to admit that, as an institution, the Congress has failed.”

I mean if the jury has already decided, why pretend to be fair? Senate Leader ‘Moscow’ Mitch McConnell never pretended, he delivered an acquittal as he promised. Trump impeachment lawyer Alan ‘Underwear Boy’ Dershowitz even offered a legal opinion for acquittal as above the law: “…if a president does something which he believes will help him get elected in the public interest, that cannot be the kind of quid pro quo that results in impeachment.”

Trump did it – he did it, but — Dershowtiz argues — he did it for us, rather than to us.

Many now imagine Trump unleashed. Trump has been off his leash for months, if not years. There is no cause and effect here. There was no quid pro quo of appeasement for reasonableness. Under the fog of Impeachment Trump was busy:

Why the land mine, a persistent killer of civilians, is coming back under Trump

Yep, Trump is pulling the US out of an international coalition banning land mines.

Trump did it – he’ll be acquitted and his behavior will get worse. I started this column some time ago over Trump’s ‘welcoming’ of foreign election interference for his personal benefit. He’s admitted it, he’s publicly encouraged it but the Party of Trump says, ‘so what?’.

Dems stood up — no ‘Murkowski’ rollover. They put forward a strong case – one that a number of Republicans noted respectfully and even agreed with. It was always an uphill battle, unlikely to result in removal. But they stood up and the public was in agreement for impeachment, witnesses and even removal. Now what?

Well… there’s an election to Win. Let’s not screw this up.

(Commoner Call cartoon by Mark L. Taylor, 2019. Open source and free for non-derivative us with link to www.thecommonercall.org )