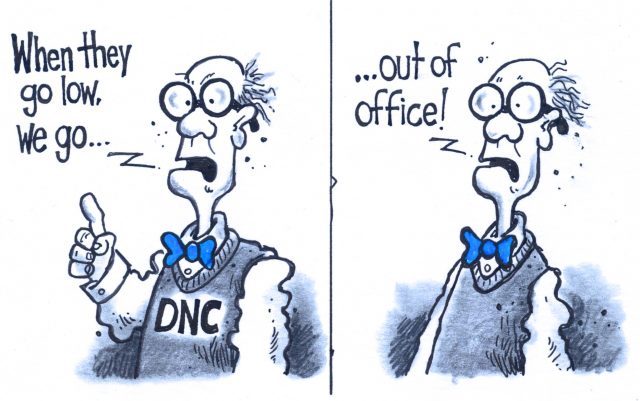 HBO  “Real Time ” host Bill Maher handed Democrats a potent weapon on Friday night, unveiling a campaign ad produced by his staff that demonstrated that Donald Trump is in a state of mental decline by using clips of the president slurring and garbling his words.

Introducing the ad he stated, “Trump is a neurological mess, but the Democrats are too scared to make an issue of it, when, actually, it would cut together really well as a campaign ad.”

Following running the clip — which was greeted with laughter and wild applause from the HBO show’s audience, Maher dryly added, “As Melania often says  to Donald, ‘That wasn’t so hard.’”

Link To Story And 8-Minute Video

(Commoner Call cartoons by Mark L. Taylor, 2020. Open source and free for non-derivative use with link to www.thecommonercall.org )

“We’re going to do as much as we can to make sure Donald Trump is not re-elected.”

Appearing on the HBO “Real Time” Overtime segment, Republican consultant Rick Wilson promised his anti-Donald Trump group, the Lincoln Project, is set to do everything thing they can to oust Donald Trump and his Congressional enablers out of office in 2020 with, in his words, a “pretty frigging nasty” blitz of ads.

Asked by host Bill Maher if his group will be endorsing a Democrat or another Republican for president, the acerbic Wilson said that is not their plan and that they will instead focus on hammering Donald Trump and vulnerable Republican lawmakers who defend him.

“As an outside force that can do things that the Democrats have demonstrably failed on doing a lot of the time, like actually getting in people’s sh*t, we’re sort of a pirate ship in that regard,” Wilson explained. …

Read The Rest And 8-Minute Video