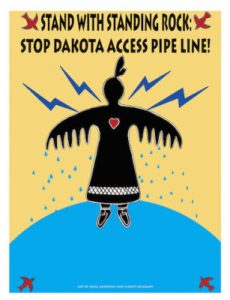 Climate action advocates on Monday condemned reports that the U.S. Department of Homeland Security has placed non-violent environmental activists on a list of domestic terrorists alongside white supremacists and mass murderers.

Citing documents received by the non-profit group Property of the People, The Guardian reports how the Climate Direct Action members who shut off tar sands pipeline operations in an act of civil disobedience in October 2016, were called “suspected environmental rights extremists” by DHS.

In the document, the department detailed domestic terror threats and said “racial and environmentally themed ideologies” are the biggest threats facing Americans today.

The file and its equal treatment of climate campaigners and violent racists was called “highly misleading” by Brennan Center for Justice fellow Mike German, a former FBI agent.

“There is little evidence that environmentalists have engaged in the types of deadly violence that would meet the statutory definition of domestic terrorism, as codified by Congress,” German told The Guardian.

“Apparently DHS hasn’t gotten the memo that pipeline protesters are working non-violently to ensure that the children and grandchildren of DHS employees—and everyone else—have a habitable climate to live in.”

In the largest action of its kind, campaigners Michael Foster, Ken Ward, Emily Johnston, Annette Klapstein, and Leonard Higgins shut down the delivery of about 15% of U.S. crude oil imports for several hours in October 2016 when they turned the valves on five pipelines across the country which carry the oil from Canadian tar sands.

The group, known as the Valve Turners, were prepared to be arrested for their action, and were charged with felony conspiracy. Charges for three of them have since been dropped; Foster, who turned a valve in North Dakota, spent six months in jail and is now serving probation. During his trial, prosecutors compared Foster to the Unabomber and the 9/11 attackers.

The Valve Turners defended their actions using the “necessity defense,” arguing that they committed a crime for the sake of the greater good. Crude oil from Canada’s tar sands has been called “some of the dirtiest oil in the world” by climate campaigners, causing air pollution and leaving toxic byproducts in the communities that surround the pipelines.

The activists are now being classified as criminals in the same category as James Fields, Jr., a white supremacist who was sentenced to life in prison last year for killing an anti-racism protester at a white nationalist rally in Charlottesville, Virginia in 2017; and Dylann Roof, who was convicted of killing nine African-American people at a church in Charleston, South Carolina in 2015.

The U.S. government’s decision to include the Valve Turners in the same list of threats as Fields and Roof suggests that DHS has a desire to “pander” to conservatives “as opposed to actually addressing real security threats (including, you know, climate change),” tweeted Anna Meier, a political science researcher at the University of Wisconsin.