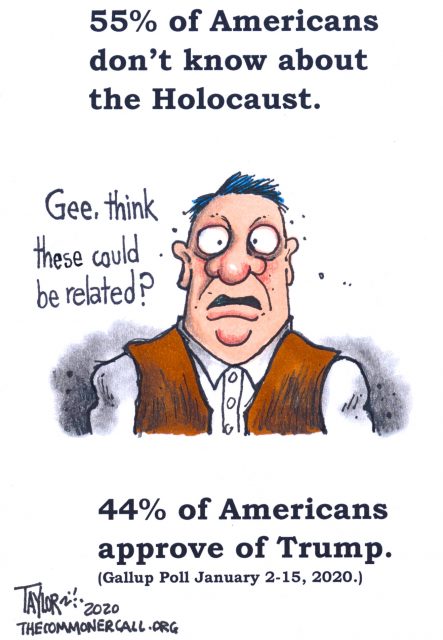 Only 45% gave the correct answer.

Fewer than half of American adults know how many Jews were killed in the Holocaust, according to a survey published ahead of International Holocaust Remembrance Day on January 27.

Forty-five per cent of those asked by the Pew Research Center about the number of Jews killed by the Nazis gave the correct answer of approximately 6 million.

The Anti-Defamation League annual audit of antisemitic incidents in the US for 2018 recorded the third-highest total since the civil rights group began publishing data 40 years ago.

From multiple choice answers, 12% selected about 3 million, and 2% selected less than 1 million. Another 12% said more than 12 million Jews died in the Holocaust. One in three people (29%) said they were not sure or did not answer.

Some people believe ignorance about the Holocaust is linked to a rise in antisemitism. There are also concerns that, as living witnesses to Nazi atrocities and the death camps dwindle in number, the Holocaust is receding in the collective memory. …

Seventy-five years after Jack Lewin was liberated from the Auschwitz-Birkenau concentration camp, the specter of anti-Semitism is rising once again.

“I didn’t believe that in my lifetime, we would have a repetition of what happened almost 80 years ago,” Lewin told HuffPost.

Hundreds of Holocaust survivors from around the world are traveling to Auschwitz-Birkenau to commemorate the 75th anniversary of the death camp’s liberation on Monday, a date the United Nations has set apart as International Holocaust Remembrance Day. Over 45 world leaders gathered at Jerusalem’s Yad Vashem Holocaust memorial on Thursday to denounce the modern-day rise of anti-Semitism. Additional ceremonies are expected to take place on Monday at Auschwitz-Birkenau.

The Nazis used forced labor to turn an abandoned military base near the town of Oświęcim, in German-occupied Poland, into a sprawling prison complex and killing center. Families from across Europe were deported to Auschwitz-Birkenau in cramped cattle trains. Some were selected as forced labor, while others deemed too weak to work ― older people, women, children, the sick ― were killed in gas chambers.

Read The Rest And 7-Minute Video