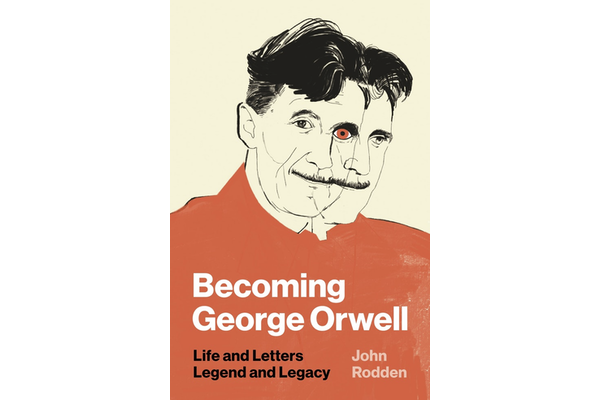 Seventy years ago this Tuesday [1/21], George Orwell, the author of Nineteen Eighty-Four, died alone in a hospital sanitorium in London.  He had struggled for years with pulmonary tuberculosis, and his weak lungs hemorrhaged for the final time.  He was just 46, and just on the verge of fame, having published his great novel just seven months earlier in June 1949.

Would the visionary author of Nineteen Eighty-Four—who always insisted on the full eighteen letters as his novel’s proper title, not the four screaming digits “1984”—have ever imagined that George Orwell might become the most important writer since Shakespeare and the most influential writer who ever lived?  That is my contention, based on his cultural and social impact, that is, with the omnipresence of his coinages in the contemporary political lexicon and his dystopian vision in the political imagination.

Crucial to his compelling language and vision was his superlative rhetorical ability to coin catchwords, such as those in his beast fable that allegorizes the history of the Soviet Union, Animal Farm (1945) and his dystopian novel, Nineteen Eighty-Four. His talent for composing arresting, memorable lines in both his essays and his fiction, especially openers “It was a bright cold day in April, and the clocks were striking thirteen”) and closers (“…He loved Big Brother”) is equally unforgettable.  Nineteen Eighty-Four rose to #1 on the bestseller lists (for the amazing fourth time in history) during January 2017 (after Donald Trump’s inauguration).  I fully expect it to do so again sometime during the presidential campaign this year.

Orwell’s worldwide fame—sales of his last two books approach 60 million in more than five dozen languages—certainly rests on his fable and dystopian novel.  Yet I would also maintain that Orwell’s importance not only is due to his “impact” as a polemicist or rhetorician, but is also explainable on the grounds of literary style, that is, in literary terms too. He is arguably the most important literary figure of recent generations. His direct literary influence in Britain and America on the generations directly following his own—the Movement writers and the Angry Young Men of the 1950s, the New Journalists such as Tom Wolfe and Gay Talese of the 1960s—rivals that of virtually any other twentieth-century writer. His influence on literary-political intellectuals since his death in 1950 is unrivalled—no successor has even come close to filling his outsized shoes.

Even more notable than all this, however, is the authority his “clear, plain” prose style has indirectly exerted, as countless writers have attested.  Orwell’s style has played a role in shaping nonfiction writing since midcentury. …