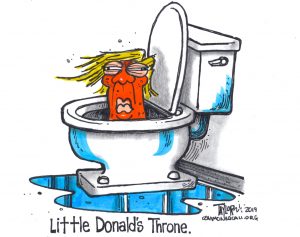 “Trump’s toilet politics are intimate, tangible, real, immediate and visceral for his cult members. They can flip a light switch and see that their new bulbs are not as bright or pleasing to the eye. Trumpists can look at the waste in their toilets and become frustrated that their excreta do not swirl down the bowl in as pleasing a way as previously.

“In a world where they feel disempowered and confused by the complexities of social and political life in the 21st century, their Great Leader is offering them something tangible that they can both understand and control. As political scientists have repeatedly demonstrated since at least the 1950s, the American public is largely non-ideological and unsophisticated, and lacks any systematic understanding and knowledge of public policy. Modern conservatism is also anti-intellectual. In addition, the United States is afflicted with a lack of civic literacy, aided by a failing educational system that does not teach critical thinking or what it means to be a responsible democratic citizen.