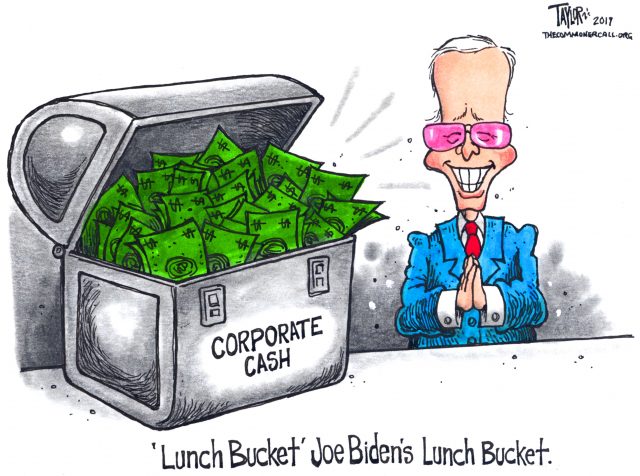 The president of an investment bank that collapsed from selling junk bonds. A shadow lobbyist at private equity giant Blackstone. A law partner who defended a Saudi Arabian banker against criminal charges. A lawyer who represents bankers accused of securities fraud. A financial executive who inspired the character Gordon Gekko, a personification of limitless greed.

One event, a reception, will take place the night of Jan. 6 and will be hosted by two real estate executives. The next morning, more than a dozen people, most of whom are executives at corporate law firms, will host another reception to raise money for the former Delaware senator and vice president.

Most of the hosts of Biden’s Manhattan fundraisers in January are corporate lawyers. These attorneys, many of them partners at their firms, have represented financial, oil and gas, and pharmaceutical companies. Other hosts are finance and real estate executives.

Biden’s opponents Sens. Bernie Sanders (D-Vt.) and Elizabeth Warren (D-Mass.) have both eschewed big-dollar fundraisers, rejecting the practice that allows wealthy donors special access to them and their campaigns. Both also say they have no bundlers—fundraisers who collect campaign donations and raise tens, if not hundreds, of thousands of dollars for a candidate. Their emphasis on small-dollar online fundraising has netted them far more money than Biden’s more traditional approach, and as a result, the Biden campaign reversed its previous position of disavowing outside support from super PACs.

Democratic contender Pete Buttigieg disclosed his bundlers in April but ended the practice in November, only to reverse course again after pressure from Warren and the public. Last week, Mayor Pete released the names of 113 individuals and couples who have raised at least $25,000 for his campaign, but he left off more than 20 prominent donors.

While Pete has come clean about his bundlers, no other candidate who is using bundlers has. The campaigns of Sens. Cory Booker (D-N.J.) and Amy Klobuchar (D-Minn.) both said recently that they would release the identities of their bundlers, but neither has been specific about when they will do so. In contrast, Biden, who continues to lead national Democratic primary polls as is among the top contenders in the early primary states, has not made such a commitment.

Among the top issues for Democratic voters are health care and climate change. While his progressive opponents have laid out ambitious plans to implement a Green New Deal, and Sanders has proposed a comprehensive Medicare for All system, Biden’s policy platform evinces more modest goals, which activists see as inadequate to rein in the health care profiteers and the fossil fuel companies.

Still, Biden claims to support a Green New Deal, calling it “a crucial framework for meeting the climate challenges we face,” and has proposed a public health care option. Based on their resumes, it appears many of Biden’s key allies in the presidential contest see things a bit differently.

Unlike his chief competitors, Sanders and Warren, Biden has had a friendly relationship with the finance industry throughout his career. He supported bills making it harder for people to reduce their student debt and to file for bankruptcy and voted for the repeal of the Depression-era Glass-Steagall law that prohibited banks from owning securities and insurance companies. Biden represented Delaware, a corporate tax haven that’s home to numerous credit card companies, in the Senate for 35 years.

Here are the lawyers, finance executives, and others who will host Biden’s Jan. 7 fundraiser …

Eric Blanc discusses how the labor movement could deliver the White House for Bernie Sanders.

Um, Yep, As A Matter Of Fact, It Is Wrong To Meet Donors In A Billionaire’s Swanky Crystal Wine Cave

The divide over corruption isn’t going away. It cuts to the core of what it means to be a member of a party that calls itself democratic.

After Thursday night’s debate, this much, at least, is clear: The central issue of the 2020 Democratic presidential primary is corruption.

Not purity. Not electability. Not socialism or fiscal responsibility or any of the other buzzwords floating around the party discourse. Corruption.

The corruption question is simple: Will the richest people in America be permitted to put their fingers on the scales of our democracy ― including the inner workings of the Democratic Party?

Accepting the standard Warren and Sanders are setting means coming to terms with the fact that Obama and Bill Clinton’s administrations engaged in activity that is hard to defend.

For two candidates in the race, Sens. Elizabeth Warren (D-Mass.) and Bernie Sanders (I-Vt.), the answer to that question has been a consistent, resounding “no.” They don’t court big donors, don’t hold big-dollar fundraisers for them, and won’t even meet with them behind closed doors. If you want Warren’s attention, you can get in line for a selfie with everyone else. Sanders even scrutinizes his contributions and returns checks from people who are too rich.

The message is impossible to misconstrue. These campaigns are putting people first, not money. Their time, attention and agenda are not for sale.

Leaders in a frenzy

For everyone else in the race … Well, you know some of these rich guys aren’t so bad. Take Craig and Kathryn Hall. They’re in real estate. You should talk to them. Maybe in their wine cave. The one with a chandelier decorated with 1,500 Swarovski crystals.

Questions about corruption continue to whip party leaders into a frenzy like no other issue. Former Obama administration officials, ex-senators, think tank presidents, TV contract Democrats and ― of course ― billionaires, are simply beside themselves that the party they belong to is seriously considering downgrading them to the ordinary status of “citizen.” …