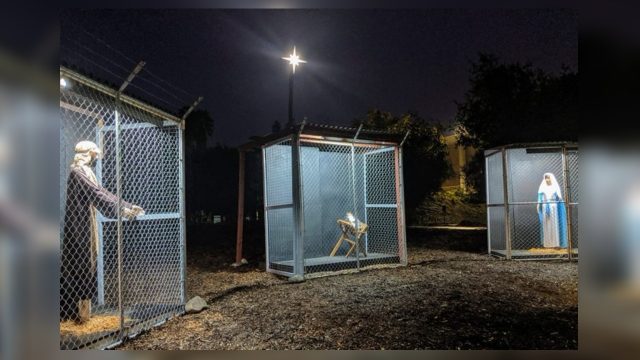 Like families in our federal concentration camps, Jesus, Mary & Joseph portrayed as refugees separated in cages.

As folks gather with family and friends this Wednesday for Christmas keep in mind the thousands of immigrant children — including toddlers and infants — separated from their mothers and fathers in the spreading United States concentration camps along the southern border.

The message of the season couldn’t be further removed from the policies of this criminal government. While conservatives love to rail on and on about a fictitious “war on Christmas” and many evangelicals choose to ignore the metastasizing crimes and immoral hypocrisies of ‘Impresident’ Trump, thousands of children languish in concentration camps paid for by our tax money.

Due to shoddy record keeping, many of those children will never be reunited with their parents. The harm being done this holiday season will carry on for a lifetime and across generations, and it is all being done in our name.

If you go to church this Christmas say a prayer for the immigrant children and their families and then another for all of us, because — like it or not — as citizens and tax payers, the brutal cruelty of our government’s behavior stains our hands and souls as well.