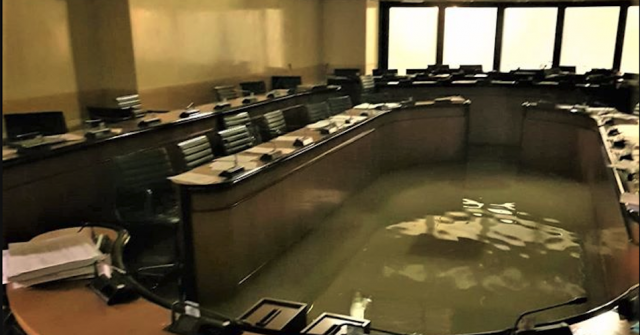 It seemed like divine intervention—or at least the hand of Gaia.

Minutes after the Venetian city council voted down a resolution addressing the climate crisis Wednesday, the council chambers were filled with water for the first time in history, the result of unprecedented flooding in the city due to the highest tides in 50 years.

As Common Dreams reported, Venice is currently suffering through intense flooding that observers have tied directly to the climate crisis.

“From north to south, Italy has been impacted by a series of extreme climate events,” Greenpeace Italy said Wednesday. “What’s happening in Venice is a powerful example. This is not just ‘bad weather,’ this is a climate emergency.”

“Beyond propaganda and deceptive reading, we are voting (for) a regional budget that spent €965 million over the past three years in the fight against air pollution, smog, which is a determining factor in climate change,” said Ciambetti.

Observers on social media noted the irony of the timing of the flooding.

“From the ‘you can’t make this stuff up’ department,” tweeted photojournalist Jordan Treece.

On Thursday, the Italian government declared a state of emergency in Venice.