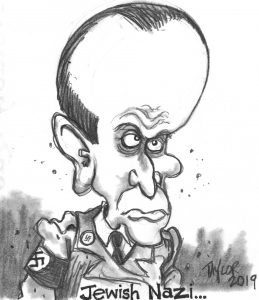 The emails, which Miller sent to the conservative website Breitbart News in 2015 and 2016, showcase the extremist, anti-immigrant ideology that undergirds the policies he has helped create as an architect of Donald Trump’s presidency. These policies include reportedly setting arrest quotas for undocumented immigrants, an executive order effectively banning immigration from five Muslim-majority countries and a policy of family separation at refugee resettlement facilities that the Department of Health and Human Services’ Office of Inspector General said is causing “intense trauma” in children.

In this, the first of what will be a series about those emails, Hatewatch exposes the racist source material that has influenced Miller’s visions of policy. That source material, as laid out in his emails to Breitbart, includes white nationalist websites, a “white genocide”-themed novel in which Indian men rape white women, xenophobic conspiracy theories and eugenics-era immigration laws that Adolf Hitler lauded in “Mein Kampf.”

Hatewatch reviewed more than 900 previously private emails Miller sent to Breitbart editors from March 4, 2015, to June 27, 2016. Miller does not converse along a wide range of topics in the emails. His focus is strikingly narrow – more than 80 percent of the emails Hatewatch reviewed relate to or appear on threads relating to the subjects of race or immigration. Hatewatch made multiple attempts to reach the White House for a comment from Miller about the content of his emails but did not receive any reply.

Miller’s perspective on race and immigration across the emails is repetitious. When discussing crime, which he does scores of times, Miller focuses on offenses committed by nonwhites. On immigration, he touches solely on the perspective of severely limiting or ending nonwhite immigration to the United States. Hatewatch was unable to find any examples of Miller writing sympathetically or even in neutral tones about any person who is nonwhite or foreign-born.

Miller has gained a reputation for attempting to keep his communications secret: The Washington Post reported in August that Miller “rarely puts anything in writing, eschewing email in favor of phone calls.” The Daily Beast noted in July that Miller has recently “cut off regular contact with most of his allies” outside the Trump administration to limit leaks.

Miller used his government email address as an aide to then-Sen. Jeff Sessions in the emails Hatewatch reviewed. He sent the majority of the emails Hatewatch examined before he joined Trump’s campaign in January 2016 and while he was still working for Sessions. Miller also used a personal Hotmail.com address in the emails and did so both before and after he started working for Trump. Hatewatch confirmed the authenticity of Miller’s Hotmail.com address through an email sent from his government address in which he lists it as his future point of contact:

“I am excited to announce that I am beginning a new job as Senior Policy Advisor to presidential candidate Donald J. Trump,” Miller wrote from his government email on Jan. 26, 2016, to an undisclosed group of recipients. “Should you need to reach me, my personal email address is [redacted].”

Katie McHugh, who was an editor for Breitbart from April 2014 to June 2017, leaked the emails to Hatewatch in June to review, analyze and disseminate to the public. McHugh was 23 when she started at Breitbart and also became active in the anti-immigrant movement, frequently rubbing shoulders with white nationalists. McHugh was fired from Breitbart in 2017 after posting anti-Muslim tweets. She has since renounced the far right.

McHugh told Hatewatch that Breitbart editors introduced her to Miller in 2015 with an understanding he would influence the direction of her reporting. For that reason, and because Miller would have regarded her as a fellow traveler of the anti-immigrant movement, McHugh sometimes starts conversations with Miller in the emails, seeking his opinion on news stories. Other times, Miller directly suggests story ideas to McHugh, or tells her how to shape Breitbart’s coverage. Periodically, Miller asks McHugh if he can speak to her by phone, taking conversations offline.

“What Stephen Miller sent to me in those emails has become policy at the Trump administration,” McHugh told Hatewatch. …

In private emails in 2015 and 2016, President Donald Trump’s top immigration adviser touted a vilely racist novel that warns of a migrant invasion, promoted the ideas of white nationalist publications, and raged at retailers who stopped selling Confederate flags in the wake of the massacre of black churchgoers in Charleston, South Carolina.

On Tuesday [11/12], the Southern Poverty Law Center published excerpts of emails Stephen Miller, the architect of Trump’s assaults on immigrants, sent to the right-wing outlet Breitbart. Miller’s embrace of ideas and language used by the “white replacement” conspiracy theorists who populate alt-right forums has long been known. But the unusual thing about the emails, which were provided to the SPLC by a disaffected former Breitbart editor, Katie McHugh, is that they come from a time when Miller was willing to put his ideas in writing. These days, well aware that he’s a target for Trump’s critics, he’s careful to avoid a paper trail by sticking to phone calls.

In a normal administration, the views laid out in Miller’s emails would be disqualifying. In a Trump administration, it makes him essential. In fact, many of the opinions he laid out in the emails have become part of the policies Miller has helped enact in the White House, from cutting refugee admissions to record lows to separating families at the border.

The SPLC has laid out the full range of Miller’s views disclosed in his emails on its Hatewatch blog. But here are a few of the most incendiary elements …

Stephen Miller sent over 900 emails to Breitbart detailing his affinity to white supremacy. Cenk Uygur and Ana Kasparian, hosts of The Young Turks, break it down.

“The emails, which Miller sent to the conservative website Breitbart News in 2015 and 2016, showcase the extremist, anti-immigrant ideology that undergirds the policies he has helped create as an architect of Donald Trump’s presidency. These policies include reportedly setting arrest quotas for undocumented immigrants, an executive order effectively banning immigration from five Muslim-majority countries and a policy of family separation at refugee resettlement facilities that the Department of Health and Human Services’ Office of Inspector General said is causing “intense trauma” in children.”

Link To Story And 12-Minute Video