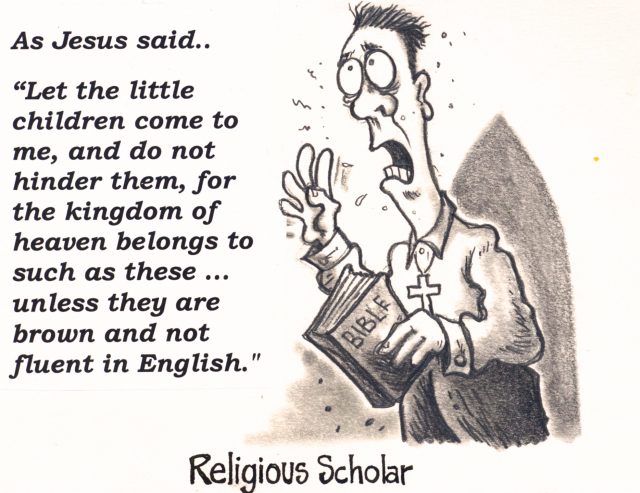 NPR’s Rachel Martin talks to Gena Thomas about how she helped a five-year-old girl from Honduras reunite with her mother. Thomas is the author of: Separated by the Border.

(Commoner call cartoon for Mark L. Taylor, 2019. Open source and free for non-derivative use with link to www.thecommonercall.org )

“There was despair everywhere.”

COMAYAGUA, Honduras (AP) — The 3-year-old girl traveled for weeks cradled in her father’s arms, as he set out to seek asylum in the United States. Now she won’t even look at him.

After being forcibly separated at the border by government officials, sexually abused in U.S. foster care and deported, the once bright and beaming girl arrived back in Honduras withdrawn, anxious and angry, convinced her father abandoned her.

He fears their bond is forever broken.

“I think about this trauma staying with her too, because the trauma has remained with me and still hasn’t faded,” he said, days after their reunion.

This month new government data shows the little girl is one of an unprecedented 69,550 migrant children held in U.S. government custody over the past year, enough infants, toddlers, kids and teens to overflow the typical NFL stadium. That’s more kids detained away from their parents than any other country, according to United Nations researchers. And it’s happening even though the U.S. government has acknowledged that being held in detention can be traumatic for children, putting them at risk of long-term physical and emotional damage.

Some of these migrant children who were in government custody this year have already been deported. Some have reunited with family in the U.S., where they’re trying to go to school and piece back together their lives. About 4,000 are still in government custody, some in large, impersonal shelters. And more arrive every week. …

Human rights advocates and family members gathered outside a federal courthouse in Arizona on Tuesday as the retrial began for Scott Warren, who faces up to a decade behind bars for providing humanitarian aid to migrants in the Sonoran Desert.

“We are here today standing together as rural border residents in the firm belief that every life is sacred, deserving of care and dignity,” Arivaca, Arizona resident Patty Miller said on behalf of the Rural Border Community Coalition. “For those of us living on the border, to deny care to those in need would be to deny our own humanity.”

Warren, a 36-year-old geography professor and volunteer with the aid group No More Deaths, was arrested in 2018 for giving food, water, clean clothes, and shelter to two men traveling through the desert. After his first trial ended with a hung jury in June, federal prosecutors announced in early July that the government was dropping one felony count of conspiracy but would seek a retrial for two felony harboring charges.

“No one should die while attempting to migrate, and no one deserves to be punished for working to prevent those deaths.”

Critics of Warren’s case have accused the Trump administration of “criminalizing compassion.” Amnesty International has promoted a social media campaign and petition calling on the Justice Department to #DropTheCharges. The international human rights group’s secretary general, Kumi Naidoo, reiterated that call last week in a letter (pdf) to Michael Bailey, the U.S. attorney for the District of Arizona.

“The voluntary activities of Dr. Warren and his associated organization No More Deaths constitute vital humanitarian aid directed at upholding the right to life of migrants, and preventing the further arbitrary deaths of thousands more migrants and asylum seekers in the Sonoran Desert,” Naidoo wrote of behalf of Amnesty’s seven million members and supporters. “The arrest and subsequent retaliatory criminal charges against Dr. Warren are an unjust criminalization of direct humanitarian assistance.”

“No one should die while attempting to migrate, and no one deserves to be punished for working to prevent those deaths,” he added. “We call on you to immediately drop all the charges against Dr. Warren.”

Thus far, the federal government has ignored calls to drop the charges and moved forward with the Warren’s case. Jury selection began Tuesday morning and opening statements were expected in the afternoon.

Among the Warren supporters outside the Evo A. DeConcini U.S. Courthouse in Tuscon Tuesday was his father, Mark, who asked: “What possible purpose is served by punishing Scott who, when confronted with a crisis of death and suffering in his own backyard, responded as any decent human would?”

Ryan Devereaux, who has followed the case for The Intercept, pointed out in an article Monday that “Warren is one of nine volunteers with the faith-based organization No More Deaths that the administration has charged with federal crimes for their work in the Arizona desert” since President Donald Trump’s inauguration in January 2017.

The cause of border problems

Notably, prosecutors this month filed a motion seeking to bar Warren from mentioning the president or his widely criticized immigration policies during the retrial.

“The government’s attempts to erase the political nature of this retrial is part of their continued efforts to hide what is truly happening along the border and evade responsibility for the violence they have caused,” Paige Corich-Kleim, a longtime volunteer with No More Deaths, told Devereaux. “Deaths on the border are the predictable outcome of not just border militarization, but also U.S. intervention in Latin America. Their attempts to limit the scope of evidence are self serving.”

Speaking outside the courthouse Tuesday, Yvette Borja, an attorney with the ACLU of Arizona, reminded the crowd that “we must always center those most directly impacted by our cruel immigration system… We are called to stand in tireless solidarity with the migrants and volunteers that make our communities whole.”

Our work is licensed under a Creative Commons Attribution-Share Alike 3.0 License. Feel free to republish and share widely.