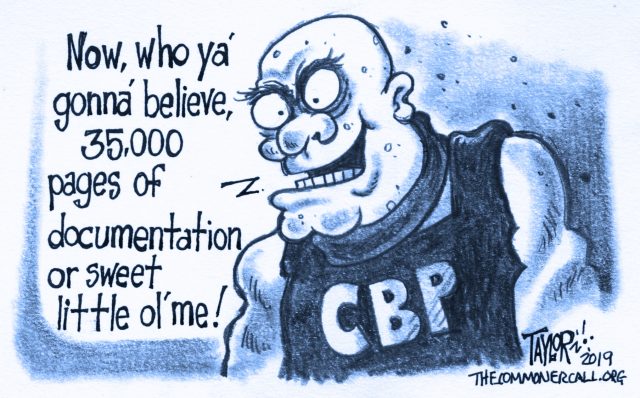 One boy said he was threatened with rape if he didn’t behave. Several others were allegedly beaten while handcuffed.

Being run over by a vehicle, beaten while handcuffed, and even threatened with rape — they’re all examples of the treatment migrant children and teenagers have said they endured while in the custody of Customs and Border Protection.

Some of the kids claim officers hit them for no reason. One boy said officers accused him of lying about his age and told him he’d be raped by an adult man if he didn’t tell the truth.

The documents, which ACLU of San Diego obtained through a FOIA request, relate to allegations of abuse made against Customs and Border Protection officers by people in custody, or made by people on their behalf, between 2009 and 2014. The documents predate the Trump administration — but the ACLU says they’re indicative of a broader pattern of abuse and mistreatment within the Customs and Border Protection, one of the largest law enforcement agency in the country.

“This didn’t happen overnight,” Mitra Ebadolahi, a senior staff attorney at the ACLU of San Diego, told VICE News. “For those of us who have been paying attention to those problems for many years, unfortunately much of what has happened more recently — although devastating and truly horrifying — is not necessarily surprising.”

Here are some of the allegations in the 35,000 pages of documents.

One 16-year-old Guatemalan boy claimed he was verbally abused and strip-searched while in custody in 2013. He said two agents accused him of lying about his age and falsifying his documents, and then told him he’d be sexually abused by an adult detainee if he didn’t tell the truth. One of the agents told the boy to remove his clothing, searched him, and continued to interview him about his age while he was undressed, according to the incident report.

Another Mexican minor said officers in Texas verbally harassed him while they drove to a processing station. At one point, according to a May 2013 incident report filed by an officer, the agents took him out of the van and told him he was going to be raped. “Well take off my handcuffs so I can defend myself,” he replied.

The agents said the boy would be beat up if he resisted, according to the document. One agent also allegedly pulled out his pepper spray and held it to the boy’s face and told him he’d be sprayed if he fought back. …

Read The Rest and 8-Minute Video

(Commoner Call cartoon by Mark L. Taylor, 2019. Open source and free for non-derivative use with link to www.the commonercall.org )

Some 300 people arrested during August raids at Mississippi chicken plants remain detained, while the companies have received no legal penalties.

Donald Trump and Stephen Miller are terrorizing migrants and people seeking refuge at the U.S. southern border, including by building Trump’s racist and unnecessary wall. And because Trump’s wall plans have been stymied, he’s creating border barriers one way or another: U.S. troops stationed at the border with weapons in hand; concentration camps to separate families simply seeking refuge; and new policies every day to keep people out.

And now, Trump just sent 2,000 more military service-members on top of the 5,000 active-duty and reserve service-members already deployed to the U.S. southern border in their anti-immigrant crusade — even though the military is legally supposed to be kept separate from domestic law enforcement because of laws like the 140-year old Posse Comitatus Act. Moreover, Trump’s use of military service-members as political pawns is a tell-tale sign of authoritarianism, which further threatens our democracy.

Throughout Trump’s presidency, the people of the U.S. have decried and documented numerous human rights abuses against migrants, including the caging, neglect, and death of children held in U.S. custody and the use of tear gas by border patrol agents against the peaceful “caravan” of people attempting to seek asylum at the border just last year.

As migrants and asylum-seekers continue to be the target of Trump’s racist, xenophobic agenda, we need answers NOW.

Sign the petition to demand the Department of Defense Inspector General investigate the use of the U.S. military at the U.S. southern border.