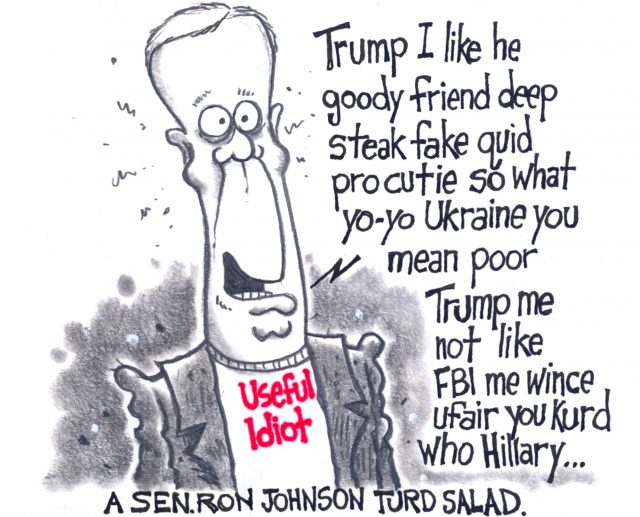 It was not a glorious moment for Wisconsin.

On Sunday [10/13], U.S. Sen. Ron Johnson, the highest ranking Republican official in Wisconsin, appeared on Meet the Press advancing conspiracy theories, attacking the media and avoiding questions with a barrage of nonsense so thick it propelled host Chuck Todd to yell back in exasperation.

“Sen. Johnson, please! Can you please answer the question that I asked you instead of trying to make Donald Trump feel better?”

It was no use. The Trump team has found the perfect surrogate in Johnson, who is reading right out of Trump’s playbook: When confronted with an unpleasant reality, make up your own reality, go inside it, and refuse to come out.

Not just in style, but also in pure destructiveness, Johnson represents the Trump wing of the Republican Party, and that’s bad news for our state and our nation.

The question Todd asked him, which Johnson reacted to with sputtering outrage, was about Johnson’s own words, quoted in the Wall Street Journal. Todd read him his own quote, and asked what he meant when he said he “winced” when he heard the president was holding up military aid to Ukraine until the Ukrainian government agreed to investigate Joe Biden’s son.

There was no getting Johnson to talk about his own recent statement, though. He was too busy talking about Hillary Clinton and the Deep State.

Johnson doesn’t trust the FBI or the CIA, he told Todd. The president has been wronged. The 2016 election might have been tampered with by Ukraine to try to help Clinton. He just wants to get to the truth.

“Ron Johnson showed a national television audience he’s willing to ignore the Constitution, undermine law enforcement and endanger national security to please Donald Trump,” said Mike Browne of One Wisconsin Now, a group that has tracked Johnson’s record throughout his Senate career. “His behavior is emblematic of the Republicans nationally and here in Wisconsin … partisan power is the only thing that matters.”

The unprecedented presidency of Donald Trump has been marked by a series of new lows. In that context, Johnson’s star turn does not stand out.

But it’s not a good sign for the country that Johnson’s word salad is, as CNN’s Chris Cillizza put it, “the GOP Trump defense in a nutshell”. …

(Commoner Call cartoon by Mark L. Taylor, 2019. Open source and free from non-derivative use with link to www.thecommonercall.org )