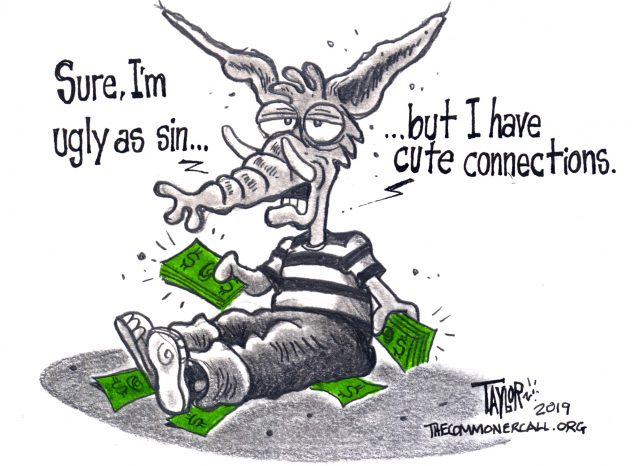 When you are the son of a famous and powerful politician, you are showered with opportunity, whether you deserve it or not. This is nepotism, but it is also, if we are being direct, a form of corruption. Moral corruption.

One of the peculiar stupidities of the American political mind is its resolute refusal to hold two separate ideas at once. Our dominant political narrative is like a Choose-Your-Own-Adventure book for morons, offering only a conservative red storyline or a liberal blue storyline, with nothing in between or outside those primary color bounds. Politicians themselves, out of self-interest, adhere to this narrative, which makes the political press adhere to the narrative, and before you know it you have an entire country that thinks about the ethical complexities of political economy with all the nuance of a Florida Gators fan hollering about why the Georgia Bulldogs are bad.

The lavish lives afforded to famous kids are, in effect, stolen from the American people. Each coveted job handed to a president’s kid represents a small quantity of subversion of the spirit of the democratic process.

We are presented with politics as sports, even though sports are a terrible model for politics. A population that chooses a political party and sticks to it out of team loyalty is a good thing for political power brokers, but a bad thing for the population of people. Every hypocritical, lying, self-serving greedhead who uses politics for the most cynical possible purposes leans on the fact that, as long as they are wearing their team colors, voters will forgive them for anything. The decrepit, oligarchal state of democracy can be attributed in part to the fact that – as any sleight-of-hand magician can tell you – it is easy to pick people’s pockets when they are so easily distracted by shiny symbols. Sometimes the symbol is a Bible, or an American flag, or a shotgun and orange vest wielded by a congressman to show you that despite the fact that he went to Yale and spent his career as an oil and gas lobbyist, he shares your affinity for duck hunting. And sometimes, the distracting symbol that makes you dumb is the blue flag of the Democratic party.

The stain of both parties

The son of a longtime US senator gets his start as a lawyer with one of the biggest corporate donors to his dad’s campaigns; a friend of his dad’s gets him a job in the Clinton administration, and then as a lobbyist; later, while his father is vice president, he is given a $50,000 per month seat on the board of a Ukrainian energy firm, despite lacking any clear energy expertise. How does this all happen? It happened the same way that Chelsea Clinton became a “special correspondent” for NBC News, and Jenna Bush got a job as a Today show host, and the Trump children got jobs overseeing a real estate empire. It happened the same way, for that matter, that George W Bush – objectively, a flailing dumbass – became the governor of Texas and then the president of the United States. …

“She really has no idea she’s privileged. She genuinely thinks she’s earned everything she has. She goes on and on all the time about how hard she works.”

The Hamptons season was in full, humid swing when Ivanka Trump went missing at its most important geezer party. Each Fourth of July weekend, Lally Weymouth, the 76-year-old daughter of the Washington Post’s former owners, celebrates her birthday with an event that’s like a “D.C.–New York–glitterati bar mitzvah,” says Anthony Scaramucci, a guest at the seated dinner for hundreds in a striped tent on her estate, where a microphone is set up on a stage for speeches attesting to her grit and longevity. Weymouth’s crowd is the mix of politicos, media personalities, and financiers that drives Americans crazy — they’re supposed to hate each other, not party together — from Commerce Secretary Wilbur Ross to Democratic fund-raiser Alan Patricof to ex-titans like former Goldman Sachs CEO Lloyd Blankfein. It’s also notable for the considerably advanced age of the attendees. “If you’re under 50, you’re under threat of Lally seating you at a kids’ table,” says a friend of Ivanka’s who’d had a fight with her husband earlier that day about accompanying her to the party. “He said he didn’t want to be there when someone had a heart attack on the dance floor.”

This is the scene Ivanka liked before she arrived at the White House, a scene that occasionally tolerated her father but more often excluded him — real power brokers, kingmakers, people who knew the way the world worked instead of simply sliding down the surface of it — though she wasn’t a Hamptons person in particular. When she was young, Donald and her mother, Ivana, rented a cottage on the ocean for a couple of summers; she’d play in the surf while a bodyguard stood next to a limo idling in the driveway, her father stalking around inside talking about how much he had to do in the city and how much the houses out here sucked. …

In 2014, Zach Dell launched a dating app called Thread. It was nearly identical to Tinder: Users created a profile, uploaded photos and swiped through potential matches.

The only twist on the formula was that Thread was restricted to university students and explicitly designed to produce relationships rather than hookups. The app’s tagline was “Stay Classy.”

Zach Dell is the son of billionaire tech magnate Michael Dell. Though he told reporters that he wasn’t relying on family money, Thread’s early investors included a number of his father’s friends, including Salesforce CEO Marc Benioff.

The app failed almost instantly. Perhaps the number of monogamy-seeking students just wasn’t large enough, or capping users at 10 matches per day limited the app’s addictiveness. It could also have been the mismatch between Thread’s chaste motto and its user experience. Users got just 70 characters to describe themselves on their profiles. Most of them resorted to catchphrases like “Hook ’em” and “Netflix is life.”

After Thread went bust, Dell moved into philanthropy with a startup called Sqwatt, which promised to deliver “low-cost sanitation solutions for the developing world.” Aside from an empty website and a promotional video with fewer than 100 views, the effort seems to have disappeared.

And yet, despite helming two failed ventures and having little work experience beyond an internship at a financial services company created to manage his father’s fortune, things seem to be working out for Zach Dell. According to his LinkedIn profile, he is now an analyst for the private equity firm Blackstone. He is 22.

Most accounts of this trend focus on the breakdown of upward mobility: It’s getting harder for the poor to become rich. But equally important is the decline of downward mobility: The rich, regardless of their intelligence, are becoming more likely to stay that way. …