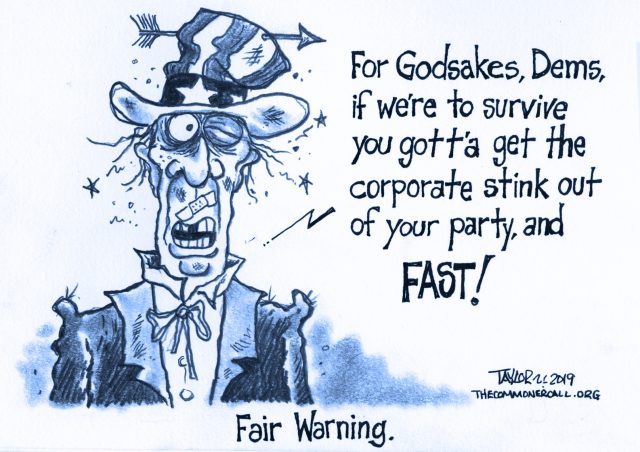 In recent interviews of several big-money Democratic donors and fundraisers in the business community, CNBC has found that this opinion is becoming widely shared as Warren surges against Joe Biden.

Democratic donors on Wall Street and in big business are preparing to sit out the presidential campaign fundraising cycle — or even back President Donald Trump — if Sen. Elizabeth Warren wins the party’s nomination.

In recent weeks, CNBC spoke to several high-dollar Democratic donors and fundraisers in the business community and found that this opinion was becoming widely shared as Warren, an outspoken critic of big banks and corporations, gains momentum against Joe Biden in the 2020 race.

“You’re in a box because you’re a Democrat and you’re thinking, ‘I want to help the party, but she’s going to hurt me, so I’m going to help President Trump,’” said a senior private equity executive, who spoke on condition of anonymity in fear of retribution by party leaders. The executive said this Wednesday, a day after Speaker Nancy Pelosi announced that the House would begin a formal impeachment inquiry into Trump.

A spokeswoman for Warren declined to comment. She tweeted her response to CNBC’s report later Thursday. …

‘You go to the mat’: Zuckerberg Vows To Fight Warren’s Facebook Breakup Bid

Mark Zuckerberg pledged to “go to the mat” to fend off Elizabeth Warren’s plan to break up Facebook in an audio recording leaked Tuesday, foreshadowing a major fight between her would-be administration and the Silicon Valley giant.

The mogul and Facebook CEO predicted during an open meeting with employees in July that the social media company would best a Warren administration in court if the 2020 presidential hopeful follows through on her pledge to unleash antitrust enforcers against the company.

“If she gets elected president, then I would bet that we will have a legal challenge, and I would bet that we will win the legal challenge,” Zuckerberg said, according to a recording obtained by The Verge. “And does that still suck for us? Yeah. I mean, I don’t want to have a major lawsuit against our own government … But look, at the end of the day, if someone’s going to try to threaten something that existential, you go to the mat and you fight.”

Zuckerberg later shared the report on social media, saying it provided “an unfiltered version of what I’m thinking and telling employees on a bunch of topics” including “breaking up tech companies.”

What would really suck

The remarks quickly drew a rebuke from the progressive firebrand, who fired back on Twitter: “What would really ‘suck’ is if we don’t fix a corrupt system that lets giant companies like Facebook engage in illegal anticompetitive practices, stomp on consumer privacy rights, and repeatedly fumble their responsibility to protect our democracy.” …