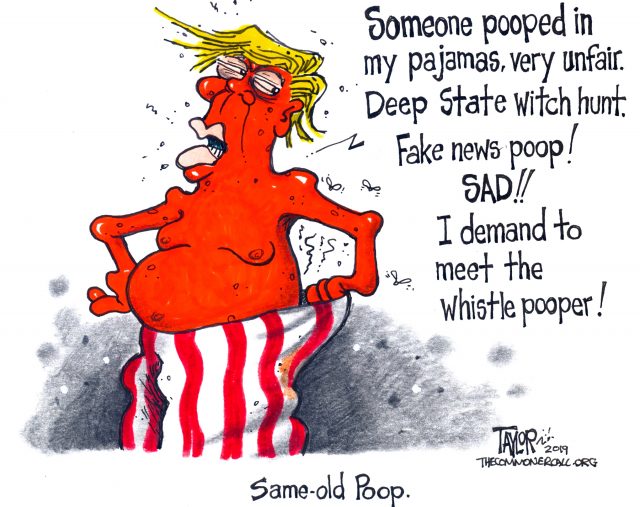 House Democrats subpoenaed President Trump’s personal lawyer Rudy Giuliani Monday, seeking documents related to his work in Ukraine. Last week, Guliani admitted on television that he had urged the Ukrainian government to investigate Trump’s political rival and 2020 Democratic presidential candidate Joe Biden. This comes as House Democrats continue to build their case for impeaching the president, following a whistleblower complaint focused on a phone call in which Trump asked the Ukranian president to do him a “favor” investigating the actions of Democrats, including Joe Biden and his son Hunter.

Meanwhile, Trump is continuing to threaten lawmakers who are pushing impeachment, and publicly admitted he is trying to find out the identity of the anonymous whistleblower, in possible violation of whistleblower protection laws. We host a debate on impeachment with John Bonifaz, co-founder and president of Free Speech for People, one of the organizations demanding Trump’s impeachment, and Chris Hedges, Pulitzer Prize-winning journalist, award-winning author and activist.

[Editor’s Note: Pulitzer Prize-winning Investigative reporter James Risen, formerly of the New York Times and now of The Intercept, provides refreshingly frank assessment of exactly who and what Donald Trump is and how the mainstream media continues to give Trump a shredding veil of quasi-legitimacy when all he is is an illegitimate grifter. — Mark L. Taylor]

Democrats are ramping up efforts to impeach President Trump for pressing the president of Ukraine to investigate Democratic presidential candidate Joe Biden and his son Hunter. Nearly 90% of House Democrats now support impeachment. On Thursday, a declassified version of a complaint by an anonymous whistleblower was released, detailing his concerns about Trump’s July phone call with Volodymyr Zelensky. In the complaint, the unnamed whistleblower — who has been identified as a CIA official — accused the president of “using the power of his office to solicit interference from a foreign country in the 2020 U.S. election.”

The complaint also revealed details about how the White House attempted to “lock down” all records of Trump’s phone conversation with Zelensky by moving a transcript of the call to a standalone computer system reserved for codeword-level intelligence information. The whistleblower wrote in his complaint, “According to White House officials I spoke with, this was ‘not the first time’ under this Administration that a Presidential transcript was placed into this codeword-level system solely for the purpose of protecting politically sensitive — rather than national security sensitive — information.”

For more on the unfolding scandal, we speak with James Risen, senior national security correspondent for The Intercept.

Chris Hedges: Impeachment? Sure, But We Need To Far Beyond That

“And so, go ahead with impeachment, but if we don’t begin to address the underlying malaise and disenfranchisement and rage — and legitimate rage — on the part of the white working class — however much Trump lies — and, of course, he lies like he breathes — the Clintons also lied, in far more damaging ways to the working class, and, in particular, the white working class, than Donald Trump. And we know from polls that right before the election in 2016, you had 55% of those who said they were voting for Trump, it was because they disliked Hillary Clinton, only 44%. So, Trump was kind of weaponized. You know, he was the middle finger to the establishment. He was weaponized against the man. And if we don’t begin to deal with those issues, impeachment itself will rend the fabric of American society further into antagonistic tribes. And we have to acknowledge the fact we are a country awash in weapons, 300 million weapons, you know, mass shootings on the average of one a day. And we almost saw, with Cesar Sayoc, the complete decapitation of the Democratic Party with pipe bombs. That’s the territory we’re headed towards.”