“In the course of my official duties, I have received information from multiple U.S. Government officials that the President of the United States is using the power of his office to solicit interference from a foreign country in the 2020 U.S. election.”

— Whistleblower’s opening sentence from the Complaint

“@RepAdamSchiff has reached an agreement with the #Whistleblower for that courageous patriot to testify in Congress.”

Trump Impeachment – don’t blink, you’ll miss a critical headline. I am going to let the headlines tell the story, link (or search) as you see fit; the news is not likely to slow.

The House Intelligence Committee Chair Rep. Adam Schiff (D-CA) has agreed to convene through the two-week break to keep the investigation moving.

My last column highlighted House Speaker Nancy Pelosi’s announcement of a formal impeachment inquiry as well as summaries of Trump’s manipulation of US foreign policy to get dirt on a political opponent ahead of the 2020 election. We begin with some excellent summaries of the actions of the Whistleblower that opened Trump’s Pandora’s Box of foreign policy corruption. Starting with the Whistleblower Complaint (see below) which covers both the “deeply disturbed” reactions by those attending the call, the cover-up, the “efforts to restrict access to the records related to the call”, and the subsequent actions to make certain the Ukraine government followed through. Most notable post-call are the incriminating actions of Trump personal lawyer Rudy Giuliani as well as the stand-up actions by Special Representative for Ukraine Negotiations Kurt Volker.

Read it for yourself: Document: Read the Whistle-Blower Complaint

The Most Troubling Revelations in the Whistleblower Complaint Against Trump

Or this Washington Post timeline with a helpful Who’s Who.

Don’t be fooled, Trump has already admitted HE DID IT!

If we were playing Clue, he did it with Giuliani, armed with $400 million in leverage, in the Ukraine.

In a true Dunning-Krueger moment Trump felt he did no wrong and against the advice of many of his advisers, he released the transcript of his call with Ukraine President Zelensky. Conservative news outlet Newsmax CEO Christopher Ruddy when told some were telling Trump to release the transcript said, “Are they nuts?”

Seven days: Inside Trump’s frenetic response to the whistleblower complaint and the battle over impeachment

Make of this what you may, but the Washington Post reported that Sen. Majority Leader Mitch McConnell was one of the voices telling Trump to release the transcript.

State Department envoy Kurt Volker was one of the first out the door, resigning last Friday [9/27]. Volker offered no public statement, but “a person informed about his decision said he concluded that it was impossible to be effective in his assignment given the developments of recent days”. Count this as the first principled resignation and contrast this with (also covered here) Giuliani’s rising tide of lies and manipulations.

The reactions of Volker and Giuliani is a perfect comparison of how we expect government to work for us versus how a Trump/Giuliani government works for them. The report includes a longer review of the Good and the Bad, worth noting that Vice President Pence is here as one of the Bad guys.

Trump has threatened the Whistleblower — who he labels a ‘spy’ — with, “I want to know who’s the person, who’s the person who gave the whistleblower the information? Because that’s close to a spy. You know what we used to do in the old days when we were smart? Right? The spies and treason, we used to handle it a little differently than we do now.”

Trump personal house lawyer (Attorney General) Barr — who has his paw prints all over the cover-up — of course does not intend to recuse.

Trump’s encouragement to Russia for ongoing interference is more notable with Russian comments this week about the possibility of the release of transcripts of Trump-Putin conversations, “we would like to hope that it wouldn’t come to that in our relations, which are already troubled by a lot of problems”. Which should stand as a reminder: Trump continues to hide the translation of his one-on-one meeting with Putin in Helsinki. But as Trump told us about his discussions with Putin, “It’s none of your business”.

So what can we expect with impeachment? Cenk Uygur of The Young Turks Cenk Uygur references comments by former Sen. Jeff Flake (R-AZ) who believes that as many as 30-35 GOP Senators would back impeachment. But, Flakes said they would only do so in a secret vote.

The executive director of Citizens for Responsibility and Ethics in Washington Noah Bookbinder in a New York Times Opinion column says The Zelensky Memo Is All the Proof Needed to Impeach Trump.

There are now 224 House Representatives supporting impeachment, more than the 218 needed for charges to clear the House and go to the Senate for trial. Rep. Ron Kind (D-WI) is one of 12 Dems “undecided”. 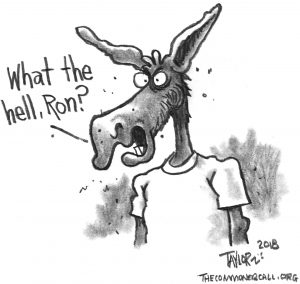 Polling shows that public opinion has changed dramatically over the last week and now has slim majorities supporting impeachment.

That’s an Impeachment summary as of today … Sunday, September 30.

(Commoner Call cartoons by Mark L. Taylor, 2017, 2018. Open source and free for non-derivative use with link to www.thecommonercall.org )