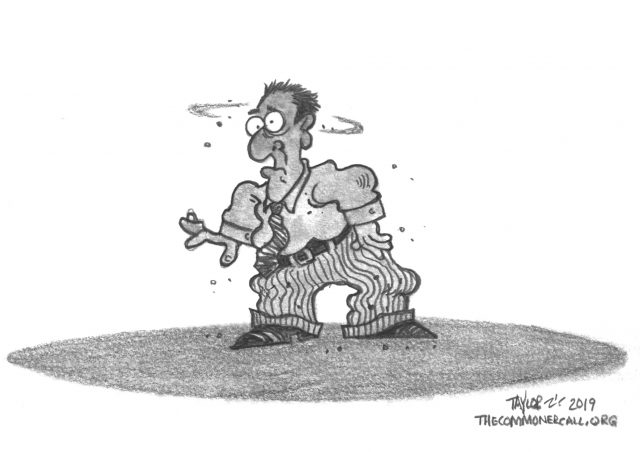 Oftentimes big stories are revealed in small footnotes. The Miami Herald recently reported (9/19)that a Marine Corps unit was looking to hold its celebration of the annual Marine Corps Ball at Donald Trump’s Mar-a-Lago resort.

“At a time when taxpayer and foreign-government spending at Trump Organization properties is fueling political battles, a U.S. Marine Corps reserve unit stationed in South Florida hopes to hold an annual ball at a venue that could profit the commander-in-chief,” the Miami Herald reported Thursday.

The news comes after recent reports of  Trump’s struggling Turnberry golf resort in Scotland benefiting from diverted fueling stops of Air Force aircraft to the small struggling Glasgow Pestwick airport the resort depends upon for survival. In addition to taxpayer funding for fuel boosting the airport, some $200,000 of our tax money went directly into the Trump organization from US service members staying at Turnberry.

Then we have this from Timothy Snyder’s 2017 book “On Tyranny: 20 Lessons From The 20th Century”:

“17. Watch out for the paramilitaries. When the men with guns who have always claimed to be against the system start wearing uniforms and marching around with torches and pictures of a Leader, the end is nigh. When the pro-Leader paramilitary and the official police and military intermingle, the game is over.”

As the article from the Guardian below illustrates, we have for some time seen local and state police agencies looking the other way, or actually facilitating and collaborating with violent far right groups and demonstrators across the country. Now we are seeing the United States military — one of the last parts of the federal government many felt could be trusted — being corrupted and co-opted in the service of Trump. We are rocketing down a very steep slope.

(Commoner Call cartoon by Mark L. Taylor, 2019. Open source and free for non-derivative use with link to www.thcommonercall.org )

Understand, As Usual, We Can’t Trust Police To Protect Us From Racist Far Right Violence. They Often Protect & Enable It

White nationalists connect through online networks and offline groups, and openly share tactics for infiltrating and influencing police departments, border patrol, the FBI and the military.

By Rashad Robinson
The Guardian (8/21/19)
As mass violence continues, many of us have become rightly afraid for the people we love. We want justice, but we also want protection.

Would the level of violence committed by law enforcement in communities of color, and at the border, even be possible if racial hatred weren’t part and parcel of police culture?

White nationalists pervade law enforcement. There is a long history of the military, police and other authorities supporting, protecting or even being members of white supremacy groups. But it’s not just history. It was revealed last week that a black man in Michigan came upon KKK materials and Confederate flags in plain view while being shown a home for sale – the home of a police officer on the force for more than 20 years who shot and killed a black man in 2009 without consequence.

It’s a widespread pattern. As early as 2006, the FBI flagged it. Another FBI report in 2015, not covered nearly enough, indicated that “domestic terrorism investigations focused on militia extremists, white supremacist extremists, and sovereign citizen extremists often have identified active links to law enforcement officers”. (And that’s the FBI, which has its own history of white supremacy affinity groups.)

White nationalists connect through online networks and offline groups, and openly share tactics for infiltrating and influencing police departments, border patrol, the FBI and the military. That was the case for a Virginia police officer – assigned to a high school – who was revealed to be a longtime white nationalist and served as a recruiter for Identity Evropa, one of the groups behind the Charlottesville hate rallies and violence. He was not shy about his cover. In chat messages, he “discussed ways to downplay appearances of racism, while still promoting white nationalism”. …

I lost My Reporting Job For Keeping Charlottesville Police Accountable. I’d Do It Again

When the editor of a weekly paper approached me about writing a regular column about local politics, the first thing I asked her was: “Are you sure you know what you’d be getting yourself into?”

That was February. I had been live-tweeting Charlottesville city government meetings for a year and a half, ever since the deadly Unite the Right rally in August 2017. Entirely by accident, I had created a fairly large audience for what amounted to municipal meeting minutes narrated by a mouthy socialist.

Though I had never written for a publication before, my concern wasn’t whether I could produce readable content. It was whether the paper was prepared to be targeted by two primary detractors of my work: neoliberals and neo-Nazis.

I wrote just six pieces before the column was canceled. Two centered on the need for police accountability in a city traumatized by the memory of officers standing by as neo-Nazis beat residents in the streets.

n a column published in May, I mentioned a photograph taken in August 2017 of an officer with his arms around James Napier, of the neo-Confederate group the Highwaymen, and Tammy Lee of the American Freedom Keepers militia. Lee’s caption read: “You should know the police escorted us and worked days with us 2b there.”

My intention was to highlight both the lack of accountability of the department as a whole for its conduct during Charlottesville’s Summer of Hate and the degree to which it had disregarded the community’s concerns about rally attendees. At no point did I allege that the individual officer had personal ties to the people with whom he was pictured.

The image of a Charlottesville officer with his arm around a member of a white supremacist militia was to me a perfect illustration of a department choosing to ignore the community it serves. It was a picture of wilful ignorance and complicity, of harm through inaction. The officer could have been any member of his department. …