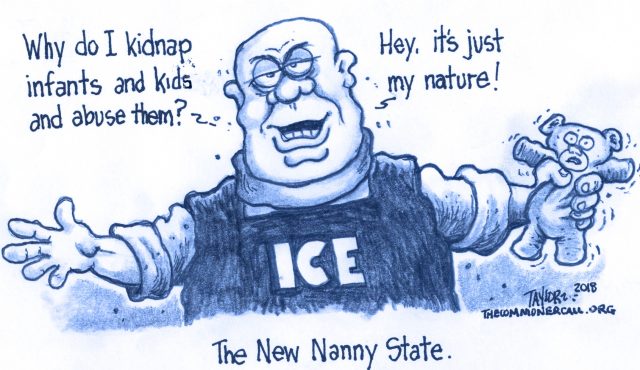 Baby concentration camps “are the worst and the last place you would ever want to put a child,” say doctors and functioning human beings.

Amidst the latest noise about the latest outrage – treason and Ukraine and extortion oh my – a grisly reminder: Crimes against small, brown humanity are ongoing. Thousands of migrant kids are still imprisoned – children as pawns, children in cages, sick, dirty, hungry, alone, frightened, experiencing “trauma after trauma” until “every heartbeat hurts.” Does it need to be repeated: Baby concentration camps “are the worst and the last place you would ever want to put a child,” say doctors and functioning human beings. “You wouldn’t want to live there. I wouldn’t want to live there. We wouldn’t want our families to live there.” Their horrors came to light again with a recent report by the DHHS Inspector General on 45 detention facilities, just half of this country’s multiple abominations. In two separate House committee hearings, lawmakers called the report’s findings of “intense trauma” and worsening mental health problems so “twisted and shameful” they constitute “deliberate, government-sanctioned child abuse.”

The hearings also revealed that Florida’s infamous Homestead facility, the largest, unlicensed, for-profit kiddie jail, which at is peak held over 3,000 children until public pressure emptied it in August, is still inexplicably paying 2,500 employees at a Trump-hotel cost of $600 to $775 a bed – $720,000 a day, now approaching a total of $33 million – to house imaginary, non-existent children. Officials explained that “retaining bed capacity is necessary to provide care and services as mandated,” adding they “anticipate an uptick in the number of referrals  based on historical trends.” English translation: Damn straight we’re still gonna make some bucks from this human tragedy.

Toward that end, soulless cretins for the “government,” seeking to re-open Homestead as soon as October, argued in court Friday that a judge should ignore experts’ and doctors’ testimony about the ravages inflicted on children there because, c’mon, what do experts and doctors know and what are a few human rights abuses in the name of catching bad guys and profits? Opposing them, lawyers seeking to close Homestead permanently cited many of those abuses: They said children were subject to “prison-like rules,” harmed by too-lengthy detention, not advised of their rights or  told they could have visitors or given access to lawyers, and often waited days for medical help. Their conclusion: “The government is causing irrevocable mental and physical harm to every immigrant child held (in) detention.

Confronted with those harsh facts, desperate Trumpian lawyers went low, and played games. They argued evidence should be inadmissible because multiple members of visiting teams did interviews with children; evidence from a Texas doctor and decade-long head of the American Academy of Pediatrics Immigrant Health should be barred because she’s not “an expert”;  testimony from a Stanford psychiatrist of “clear ongoing psychological harm directly attributable to detention and separation practices” should be tossed out because he didn’t adequately describe his methodology; findings by a Stanford professor and expert in pediatric health, emergency medicine and health services were not “relevant.” To these monsters, we offer one simple, relevant truth: A child is a child is a child. In light of their atrocities, treason charges pale. Put ’em all away for a long, long time, and may justice be served.