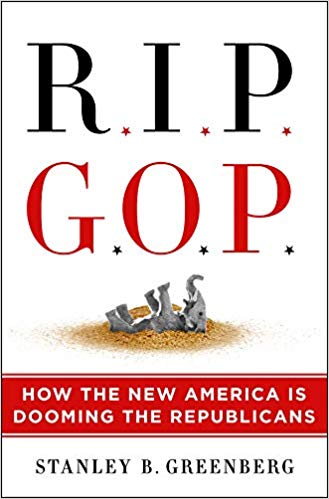 Nearly 35 years ago, the pollster Stanley Greenberg took a hard look at Macomb county, Michigan, wanting to better understand the political DNA of “Reagan Democrats”. He concluded: “These white Democratic defectors express a profound distaste for blacks, a sentiment that pervades almost everything they think about government and politics.”

A supporter of Robert Kennedy in 1968, Greenberg saw class, not race, as the lever of choice in wooing Democratic voters. A quarter-century later, he was Bill Clinton’s pollster in his victorious 1992 presidential bid.

Now Greenberg delivers RIP GOP, in which he predicts that the rage engendered by Donald Trump will lead to his defeat in 2020, Democratic control of the Senate and the collapse of the current Republican party. Imagine the past midterms on steroids.

An illustration of a dead elephant lying on a mound of dirt, all four legs skyward, graces Greenberg’s cover. Apparently, the author is less interested in unifying the US than in forging durable coalitions. Think math, not therapy. It’s about 50% +1.

The book is methodically and meticulously researched. It portrays an America where white voters without a four-year degree remain nearly a majority and suburbia is home to half of the population. A country grown less worshipful and more diverse. We really do live in a bubbling cauldron of contradictions and countervailing forces.

In Greenberg’s telling, a galvanized Democratic party led by minorities, single women, younger voters and women with degrees will upend a decade of Republican ascendance built on the Koch brothers’ money, hostility toward modernity, racial resentment and nativism. It’s a bold prediction, even if Trump’s approval ratings are underwater and the GOP is scrapping primaries to avoid embarrassing their guy.

First, presidents seldom lose re-election, and unlike Bush 41, Trump is not mired in a recession. …

Trump Is Seriously, Frighteningly Unstable – The World Is In Danger

Pray that we make it through the next 14 months. Then do everything in your power to remove this man from office.

In retrospect, what’s most disturbing about “Sharpiegate” isn’t Trump’s clumsy effort to doctor a National Weather Service map or even his brazen move to get the same agency to lie on his behalf.

It’s how utterly petty his motive was. We’ve had presidents trying to cover up a sexual liaison with an intern and a botched burglary, but never have we had one who went to such lengths to cover up an inaccurate weather forecast. Alabama being hit by a hurricane? Friends, this is not rational behavior.

Trump also cancelled a meeting with the Taliban at Camp David. The meeting was to have been secret. It was scheduled for the week of the anniversary of 9/11. He cancelled it by tweet.

Does any of this strike you as even remotely rational?

Before that, Trump cancelled a state visit to Denmark because Denmark wouldn’t sell Greenland to the US. Hello? Greenland wasn’t for sale. The US no longer buys populated countries. The state visit had been planned for months.

He has repeatedly told senior officials to explore using nuclear bombs to stop hurricanes hitting the US. He believes video games cause mass shootings. He thinks climate change is no big deal.

He says trade wars are “good and easy to win”. He insists it’s Chinese rather than US consumers who pay his tariffs. He “orders” American firms to stop doing business in China. …