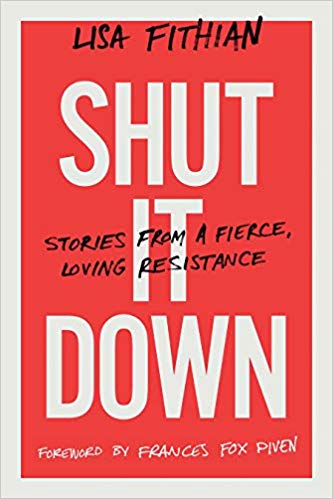 Lisa Fithian is a longtime organizer and nonviolent direct action trainer since the 1970s. She has shut down the CIA. She has occupied Wall Street, disrupted the World Trade Organization and stood her ground in Tahrir Square. She has walked in solidarity with the tribal leaders at Standing Rock and defended communities in the wake of Hurricane Katrina.

“It’s an incredibly painful time, but we can’t let that pain de-stablize us.”

She joined us at the Democracy Now! studio to talk about her new book, which was published this week, titled “Shut It Down: Stories from a Fierce, Loving Resistance.” Fithian is currently on a book tour and doing a new workshop called “Escalating Resistance: Mass Rebellion Training.”

Part Two: “Shut It Down: Stories from a Fierce, Loving Resistance”: Lisa Fithian Reflects on Decades of Protest

Activist and organizer Lisa Fithian looks back on decades of activism and paves a road forward for current movements in her new book, “Shut It Down: Stories from a Fierce, Loving Resistance.” We speak with Fithian in Part 2 of a conversation about protest movements throughout time, combatting the climate crisis, and nonviolent direct action.

“When we are feeling we can’t take it anymore, the most important thing to do is actually reach in and to take action and to do something, because that’s where we begin to get a sense of our power, that we can make a difference. And if history has shown us anything, it’s like, unless we actually organize, we aren’t going to make changes. So, it’s just a critical time.”