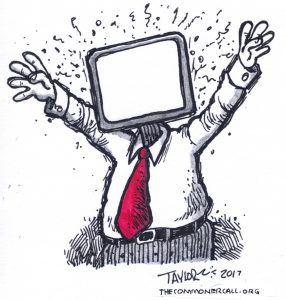 The conservative movement has been overtaken by performative stupidity.

There are new rules. It doesn’t matter if you want to play by them. It doesn’t matter if you believe there should be other rules. In the world of images we have entered, a world of screens, the sudden acceleration of the scope of mass media in all forms has generated, on the right, a conservative buffoonery that has taken over the major parties, and, on the left, a tendency toward political suicide by the refinement of image. As with Ernest Hemingway’s proverbial bankruptcy, the crisis has arrived gradually, then all at once. And the test is imminent: At stake over the next year or so, across the English-speaking world, is whether democracy, as an idea and as a practice, can survive in the mass media conditions of the 21st century.

Likability is irrelevant. Approval ratings are irrelevant. The capacity to gather attention is the main source of power now. Only celebrities have the requisite semantic fluidity to negotiate the new reality of entertainment as politics.

The conversion of politics into pop culture is foundational. It’s not the result of anyone’s decisions, but of the changing conditions by which the public receives information. Anyone who does not accept the rise of politics as entertainment quickly becomes irrelevant, on the left or the right. Robert Mueller, schoolboy FBI agent and lifelong Republican, gave his report on Donald Trump’s involvement with Russia in printed form. He may as well have put it in a bottle and thrown it into the sea. If it isn’t on TV, if it isn’t viral, it doesn’t exist. Elizabeth Warren is a brilliant woman with a series of brilliant policy proposals. She emanates decency and intelligence. She’s been empirically correct about every important issue for two decades. But when Warren presents her detailed and balanced policy proposals to the public, everybody understands that, under the current American system, none of them will ever be achieved, and that any that did, by some miracle, come to light, would be so heavily compromised as to be unrecognizable. So when Warren puts out deep policy, it’s the aesthetic of the depth that matters. By being so policy-heavy, she is projecting a character: the brainiac. …