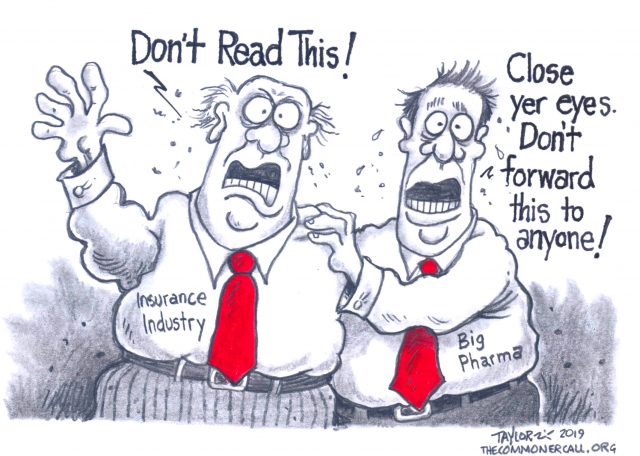 The inefficiently expensive, unjust and profit-driven model of the American corporate industrialized medical profit system leaves most citizens with a very limited vision of what could be the humane and cost-effective norm for health care under a universal, Medicare For All kind of model of universal health care.

Recently, a family member and his wife gave birth to a baby and he sent me a rundown of the support they received in the South Korean model of health care.

From conception until the baby’s second birthday the family receives $200 a month to help with the incidental expenses of raising a baby: diapers; car fare; child care; medications etc.

Because they were in their 40’s the birth was considered higher risk. They got a letter out-of-the-blue saying because of that they would have an additional $3,000 of coverage in case there were any complications with the delivery.

Here were the costs of the delivery and hospitalization:

Total cost for the delivery: $250 USD

And when they returned home they found a letter from the government congratulating them on the birth of the baby … and a check for $1,000. An amount, BTW, that more than paid for the cost of the two hospitalizations.

As my source noted: “That’s my kind of ‘pro-life’ policy.”

“The South Korean healthcare system is run by the Ministry of Health and Welfare and is free to all citizens at the point of delivery. The system is funded by a compulsory National Health Insurance Scheme that covers 97% of the population. Foreign nationals living in South Korea enjoy the same access to universal healthcare as the local people.

“South Korean healthcare offers the choice of occidental (Western) medicine, or traditional oriental treatments, many of which have been extensively researched and developed alongside their modern counterparts.”

But there is even more to the story

There is another aspect to this story of significance beyond birthing a baby. About half-way through the pregnancy the mother developed gestational diabetes and had to go on a treatment of low-doses of insulin four times a day.

At a time when Americans daily hear stories of diabetic young people aging off of their parent’s insurance coverage on their 26th birthday and then scrambling to pay up to $1,800 a month for life-saving insulin, and we hear a steady drumbeat of those who can’t do that halving their doses to get by or even dying for lack of insulin, the couple in Korea were able to easily pay for their insulin.

The husband noted, “We bought our insulin without any help from insurance. Each 3-ml [insulin injection] pen cost us roughly $5USD.”

One pen would last about a week. That is $5 per week easily paid for out of pocket for life-saving insulin. Meanwhile in the US insulin keeps getting more and more expensive.

And recently we saw Medicare For All champion and democratic presidential candidate Bernie Sanders leading a caravan of United States residents across the border to Canada to access affordable insulin. The price for the life-saving drug continues to grow, fattening Big Pharma profits while leaving more and more of our fellow citizens at risk.

Americans spend more than twice what the next highest western industrialized nation spends on health care yet we rank 22nd in health outcomes. We pay far more and get — far, far — less.

Meanwhile, lest we forget the brutal realities of life in an increasingly unstable and corrupt America, three men — Bill Gates, Warren Buffet and Jeff Bezos — own more wealth than bottom 50% of the nation.

And as more of the nation’s resources and wealth benefit the very few, people die needlessly because they can’t afford insulin that people in other nations can often afford out-of-pocket.