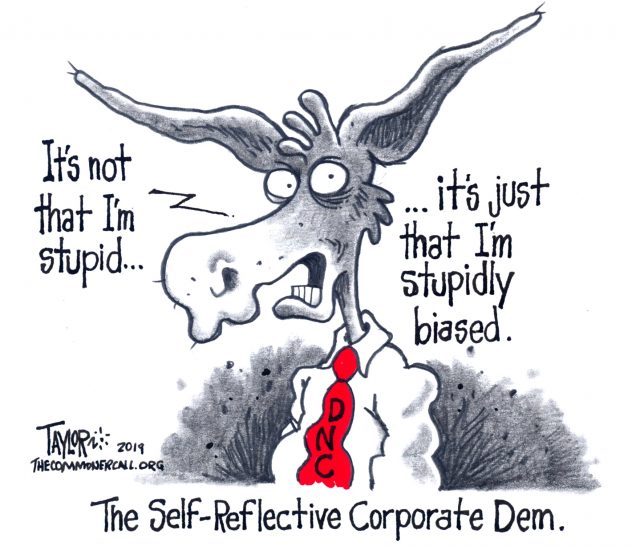 “She’s a trainwreck.”
There is only one politician who polls worse than Nancy Pelosi. Guess who that is…

A panel on the Young Turks takes a dive into some recent polling to come up with some surprising results. Despite the frantic spin of corporate democrats and some of their smelly polling misinformation, progressives like Elizabeth Warren, Bernie Sanders, Ilhan Omar and AOC significantly outpace corporate dems, including Joe Biden.

The question of course is: Will a dose of polling reality budge the corporate dems?

“Once the fade begins it’s terminal.”

The three candidates are bunched together, each receiving about the same amount of support (Sanders 20%, Warren 20% and Biden 19%) from registered Democrats and Democratic-leaning independent voters.

Since Monmouth’s June poll, Sanders and Warren have gained slightly (up 6 and 5 percentage points), while Biden has lost significant support (down 13 points).”

Signs of a disconnect between support for Mr. Biden in polls and excitement for his campaign on the ground in Iowa.

“I did not meet one Biden voter who was in any way, shape or form excited about voting for Biden … They feel that they have to vote for Joe Biden as the centrist candidate, to keep somebody from the left who they feel is unelectable from getting the nomination.”– Patrick Murray, director of Monmouth’s Polling Institute

Joseph R. Biden Jr. is coasting in the national polls. Surveys show him ahead of his Democratic rivals in hypothetical matchups against President Trump. He has maintained a lead in Iowa all summer, despite facing months of controversies over his record and his campaign missteps.

But less than two weeks before Labor Day there are signs of a disconnect between his relatively rosy poll numbers and excitement for his campaign on the ground here, in the state that begins the presidential nominating process.

In conversations with county chairs, party strategists and dozens of voters this week at Mr. Biden’s events, many Democrats in Iowa described a case for Mr. Biden, the former vice president, that reflected shades of the one his wife, Jill Biden, bluntly sketched out on Monday. “You may like another candidate better, but you have to look at who is going to win,” she said, citing Mr. Biden’s consistent lead in early surveys. …

Beware Those Who Lecture On Electability

The whisper campaign has begun. It was to be expected. As Elizabeth Warren marches higher in the polls, as her crowds swell, her press accounts improve, and her electability numbers rise, there are an increasing number of articles with versions of the same storyline: there are widespread worries among Democrats about whether she can defeat President Trump.

The sources of these handwriting concerns are often anonymous. And that should bring with it a healthy note of caution. We know that electability is the number one motivator for Democrats. So anyone who perceives Warren as a threat, either her fellow Democratic candidates or the Trump campaign, could have a motive for pushing this narrative.

To be sure, there are many who legitimately worry Senator Warren’s progressive policies will be a hard sell. Others may not want to admit it but fear a woman will face tougher odds. But these concerns have been around for a while. And the timing now is curious. Because Warren seems to be impressing a growing number of people that she can win.

Trying to predict electability is often a frustratingly hopeless pursuit. I have found that he who lives by the crystal ball learns to eat a lot of broken glass.

Is Tulsi Right About DNC Bias?

Team Rising is joined by Democratic strategist Andrew Feldman and Trump 2020 Advisory Board Member Paris Dennard. They discuss Tulsi and the DNC.