His message sounded like something that could have “dribbled out of the mouth of Scott Walker.”

[Editor’s Note: Really, Tony? Do you think surrender and humiliation is what we voted for in a governor? Disgraceful. No doubt a Gov. Mike McCabe would have delivered a very different and much-needed message on behalf of the people of Wisconsin to this band of thieves.  — Mark L. Taylor]

Gov. Tony Evers bowed down to the biggest business lobby in Wisconsin yesterday [4/13].

In a speech to Wisconsin Manufacturers & Commerce, which spent more than $1 million in nasty ads against him in his race for governor, Evers acted like they were his buddies.

“Thank you,” he said, shockingly. “My administration continues to support the work that you’re doing to create a better Wisconsin.”

The work that WMC has actually been doing over the last ten years has been ruinous for Wisconsin. WMC supported lots of bills that have damaged our environment: frac sand mining, Foxconn, wetlands destruction, to name a few. WMC was also a prime backer of Scott Walker’s assault on workers’ rights: Act 10 and so-called Right to Work, among them. And WMC vigorously supported bills that helped landlords at the expense of tenants and bills that made it harder for consumers to sue asbestos and lead manufacturers.

So what in the world was Evers talking about?

Baffling from the very beginning

His speech was baffling from the very beginning, where he pretended that the budget battle this spring was something other than an attempt by Majority Leader Scott Fitzgerald and Speaker Robin Vos to show him who was boss.

For some reason, Evers made it out to be an exercise in bipartisanship. He said it was “a bipartisan effort, even though the media would like to continue to portray it as anything but.”

He also promised the CEOs in the audience that he was going to make it easier to transfer the fruits of public research into the hands of private companies. He said he wanted to bolster “new investments in research and development in our University of Wisconsin system” and then help “remove barriers that we find when we look to pass on that research and development to the private sector.”

He also said he wants to “get behind our entrepreneurs in Wisconsin,” which is something that could easily have dribbled out of the mouth of Scott Walker.

And while it was refreshing, in the Age of Trump, to hear Evers talking about the “need to embrace diversity and inclusion in our workplace” and to “make sure all people are welcome here,” that was the only thing that the media seemed to focus on.

They missed the bigger story: that Evers went into the lion’s den and rolled over. 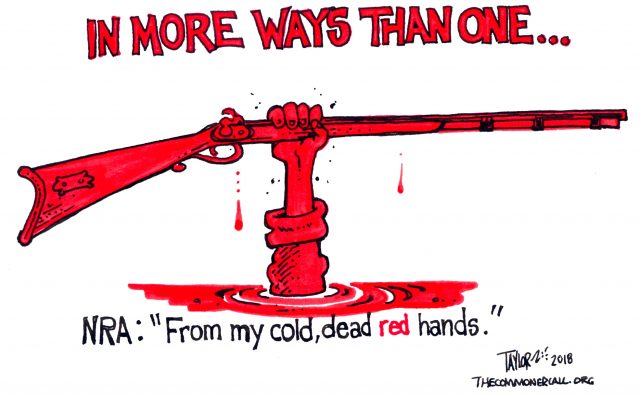 Some Republican state senators who evaded a Milwaukee Journal-Sentinel reporter’s questions on Tuesday about considering tougher gun laws, and another who opposes them, have received election support from the National Rifle Association (NRA).

Sen. Dan Feyen, of Fond du Lac, said he thought current laws, which lack universal background checks, were fine and asked reporter Patrick Marley to turn his recorder off. Feyen, who was elected in 2016, received $2,824 in outside election support from the NRA.

Sen. Alberta Darling, of River Hills, refused to say whether background checks should be required for more gun sales, such as those made at gun shows or over the internet. Darling, who has been elected to the legislature since 1990, has received $5,035 in direct contributions and outside electioneering help from the gun group – the third most of any Republican.

Sen. Devin LeMahieu, of Oostburg, refused to say whether he thought background checks should be required for online gun transactions between two strangers. LeMahieu, who was first elected in 2014, has received $1,666 in contributions and outside election support from the NRA.

Sen. Jerry Petrowski, of Marathon, said he would have to review proposals for broader background checks before he would comment. Petrowski, who has been elected to the legislature since 1998, has received $1,638 in NRA contributions and outside support.

Majority Leader Scott Fitzgerald, of Juneau, said in a separate tweet that he doesn’t know what can be done about mass shootings but that he personally disagrees with expanding background checks because “there is always going to be a constituency who vote Republican and that means registering your firearm and they are going to be opposed to it.”

Fitzgerald, who has been elected to the Senate since 1994, has received $1,777 in NRA contributions and outside election support. And the Committee to Elect a Republican Senate, which he runs to raise money to spend on GOP Senate candidates in elections, received $5,000 in direct NRA contributions.

Earlier this month, 31 people were killed within 24 hours in two mass shootings in El Paso, Texas, and Dayton, Ohio.