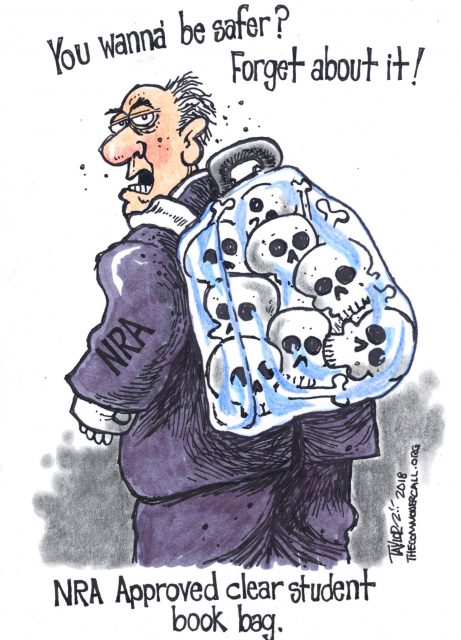 In a new grim grotesquerie, sales of bulletproof backpacks are up as much as 300% as parents frantic to keep their children alive prepare to send them to this year’s killing fields – once called going back to school – after our latest slaughter in El Paso and Dayton. Really, it’s little wonder we’re now sending our kids to classrooms in princess-and-superhero-emblazoned anti-ballistic armor: Even apart from massacres, roughly 100 Americans a day die from guns in “routine” shootings; since Dayton, gun-toting, Walmart-shopping sociopaths have been especially active from Florida to Missouri. Following a bleak pattern since Sandy Hook, more shootings often mean more sales for the red-blooded go-getters of America’s body-armor industry. “We always see spikes in sales in the days or weeks after shootings,” says Steve Naremore, CEO of Houston-based TuffyPacks. “Our demographic is parents with kids…It’s a real morbid niche.”

Also profitable, which is why many back-to-school shelves now boast “Protection is in Session” signs over multi-colored bulletproof backpacks from companies like ArmorMe, Guard Dog Security, Citizen Armor and Bullet Blocker. Their websites spiral further into madness, offering bulletproof hoodies, diaper bags, inserts, vests, clipboards, and binders opening into a shield, with pockets for taser and pepper spray, to “protect yourself or your loved ones anywhere you go.” “These companies are capitalizing on parents’ fears,” charges one mom demanding action. “We’re asking children to stand up to gunmen because lawmakers are too scared to stand up to the gun lobby. (These products) shouldn’t exist.”

Utah’s Citizen Armor proudly promises lightweight t-shirts/shields with “more bullet-bouncing protection.” ArmorMe‘s backpack is designed to be a “very stylish” pack that “will increase your survival chances.” Florida’s DefendAPack offers a vest with handgun protection “perfect for young children.” Wonder Hoodie is “shaking up the body armor industry” with hoodies protecting body and head “from bullet and knife threats,” $595 for adults, $450 for kids; their longer vest will “protect your heart (and) stay in place when the going gets tough: “Bulletproof never looked better. Join the revolution.” Guard Dog – “your best friend in security” – offers teal, pink, gray, black backpacks, though they recently pulled their princess and superhero ones after Disney threatened a copyright fight.

All the companies have had to concede their backpacks, which can cost $500, might save you from a handgun, but not an assault rifle, never mind that said backpack would likely be in a locker when and if a shooter appeared. Much more vitally, some also admit that in a relatively sane world a bulletproof anything shouldn’t be on a back-to-school shopping list, and isn’t an ideal solution to a blood-soaked national catastrophe. Other proposed, often bizarre solutions: Walmart took down displays for violent video games, said they’re “in shock” from the recent shootings, but left the guns out. Hannity wants armed school guards, states want armed teachers or clear book bags, Mitch McConnell wants his NRA blood-money, the inciter-in-chief wants loathsome photo-ops. We, and many many others, want to get rid of the guns, because sending kids to school in any facsimile of a flak jacket is sick. Meanwhile, warns a Sandy Hook mother, “The more we stall, the more people will die.”

(Commoner Call cartoon by Mark L. Taylor, 2018. Open source and free for non-derivative use with link to www.thecommonercall.org)