Trump just confirmed his open secret – everything he does is based on a simple filter of how it makes him look. Trump will embellish, lie or rationalize anything he says or does and his base will respond with adoration and their own rationalization.

““He’s a very highly respected conservative pundit,” Trump told reporters in New Jersey, referring to right wing commentator and comedian Terrence K. Williams, who pushed out a wild conspiracy theory about Bill Clinton and being involved with Jefferey Epstein’s death. “He’s a big Trump fan. That was a retweet, that wasn’t from me. That was from him, but he’s a man with half a million followers, a lot of followers. And he’s respected.”

““So I think I was fine,” added Trump, who has 63 million followers on Twitter.”

The context is not the issue here. The issue is the president of the United States trading in whole cloth unproven conspiracy theory. But let’s leap ahead – beyond how he looks there is a critical element of the darkness that is Trump. It’s never enough to just look good, someone else has to be made to look bad.

‘Everything that we hold dear’: From race to plastic straws, Trump dials up culture wars in divisive play for 2020 votes.

This is the banal aspect of Trump’s dictatorial approach to picking the winners and losers at every level. Don’t like Apple, impose tariffs on iPhones. Don’t like the Washington Post, make your Department of Defense minions put a ‘hold’ on a $10 billion cloud computing contract.

But I should finish the thought – Trump has sold $670,000 worth of ‘Trump’ plastic straws as a campaign fund raiser in one month.

“With the Trump straws, the campaign tapped into widespread disdain for paper straws that simply don’t work,” he said. “People don’t like being told they can’t do simple things, and so the Trump straws were born.”

Hackers were told to break into U.S. voting machines. They didn’t have much trouble.

Are there vulnerabilities in our election security. Are they serious? According to the experience at the Vegas Def Con Voting Village:

“…the committee said that hackers “exploited the seams” between federal and state authorities and that states weren’t sufficiently prepared to handle such an attack.

““In 2016, cybersecurity for electoral infrastructure at the state and local level was sorely lacking,” the report reads. “Voter registration databases were not as secure as they could have been. Aging voting equipment, particularly voting machines that had no paper record of votes, were vulnerable to exploitation by a committed adversary. Despite the focus on this issue since 2016, some of these vulnerabilities remain.””

We are continually fed the see-no-evil knee-jerk assurance that no votes were changed in the 2016 election while Senate Leader ‘Moscow’ Mitch McConnell refuses to bring even bi-partisan legislation to a vote to correct known flaw. 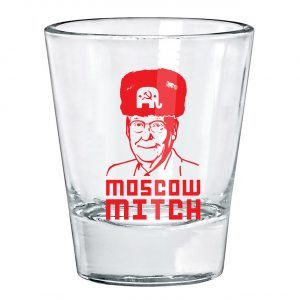 With Moscow Mitch giving Russia a pass, we may all need one of these with something potent onboard.

Sadly it is eyes-closed to many cybersecurity issues. Also a Def Con a group of hackers was given the opportunity to sabotage critical F-15 fighter jet systems and they succeeded:

““There are millions of lines of code that are in all of our aircraft and if there’s one of them that’s flawed, then a country that can’t build a fighter to shoot down that aircraft might take it out with just a few keystrokes,” he said. (Air Force top acquisition official Will Roper)”

But — heaven forbid — let’s not make Trump feel bad about himself.

You know who else gets a pass because he publically declares his love for Trump?

When North Korea leader and Donny lover Kim Jong-Un is not violating his commitments to Trump or writing him another love letter he’s been accused of perpetrating ransomware attacks to fund his missile and nuclear program. While eastern Europe, Iran and other locations have been the source of similar attacks, no one is ruling out North Korea. In similar attacks in 2017:

“…a ransomware called WannaCry targeted tens of thousands of computers using Microsoft Windows operating systems in more than 100 countries. Officials in the US and the United Kingdom eventually blamed North Korea for the attack. Also in 2017, corporations in the UK, France, Russia, Israel, and Ukraine experienced ransomware attacks. US hospitals were also targeted.”

It is a fair criticism to cry ‘foul’ over the connections I’ve just made. I’ll slow down – North Korea has a history of ransomware attacks, Baltimore suffered a similar attack…

But what we hear from the supposed leader of the western world is how much he loves Kim Jong-Un while criticizing Baltimore saying it is “a rat and rodent-infested mess” and “no one would want to live there”. This after criticism of Obama neglect of Baltimore and a campaign pledge tweeting, “I would fix it fast”.

But if you have to choose between solving real problems and helping people or dog-whistling violent white nationalists for reelection, we know how that’s going to be decided.

Protecting a big turkey of a deal

Beyond Kim Jong-Un, fellow authoritarian and Turkish President Recep Erdogan also cozied up to Trump and figured he could have his cake and eat it too. In this case it meant he could be a NATO member country, forge a strategic military relationship with Putin while side-stepping promised sanctions for a decision to enter a “$2.5 billion defense deal” to purchase Russian S-400 air defense systems. While much noise was made about US sanctions:

“But in recent weeks, 30 planeloads of radars, missile launchers and support vehicles have arrived at an air base near Ankara, Turkey’s capital, and the threatened sanctions have not materialised. It has taken everyone by surprise. “

Not everyone – Erdogan has said for months he’d work this out with Trump.

But it’s not just the Donald, there’s Junior executing de facto US foreign policy by hoovering up any dollars possible for ‘friendly’ relations. Thomas Friedman once touted global trade as conflict prevention saying that “no country with a McDonald’s had gone to war with another.”

Read if you want, but the spoiler – Donnie goes to Indonesia to announce “two Trump-branded resorts” while defending Dad against accusations of conflict of interest.

But international conflict of interest is not only for the Trumps. How do you say, “Welcome to Kentucky!” in Russian?

Yep, Moscow Mitch gets a payoff for being a loyal protector; payment in Russian oligarch dollars and damn the sanctions … or the consequences. The new news here is we learn more about Moscow Mitch’s finagling to ‘open the door’ to Russian money:

“…the timing of their meeting shows how much a major venture in McConnell’s home state had riding on the Democratic-backed effort in January to keep sanctions in place.

“By the next day, McConnell had successfully blocked the bill, despite the defection of 11 Republicans.”

But please don’t call him Moscow Mitch, he doesn’t like it.

And please — whatever you do — do not sing this popular Moscow Mitch song:

So you think Trump is all washed up. After all the scandal and bumbling about, who could support him. I mean, really, how many white nationalists can there be, no one likes graft, grift and corruption? Well I have bad news – Evangelicals feel better about Trump for reelection than they did in 2016.

It’s not complex, just like my opening report on Trump quoting white nationalists, Evangelicals like him so he likes them so they like him. The may not even like much of what he does but…

“Back and forth like this, on and on: the Green New Deal, taxes, climate change, abortion, with Joe holding that Trump’s essential toughness set him apart from the other slick, polished Republican alternatives, and Daniel pressing as to whether that belligerent approach to politics really accomplishes evangelical goals. “Trump accepts evangelicals,” Joe said, unlike the Democrats. “I think ‘accepting’ is probably a friendlier term than ‘exploits the talking points they want to hear,’ ” Daniel parried. There were the usual sparring sessions over media dishonesty and the extremes of Trump’s policies, such as family separation at the border, which Joe admitted he didn’t approve of.”

It’s like we never got to leave junior high.

There is one guy who is right now the greatest threat to the free world.  His world view is: what makes him look good and who can he hurt in the process.  And many love that about him.