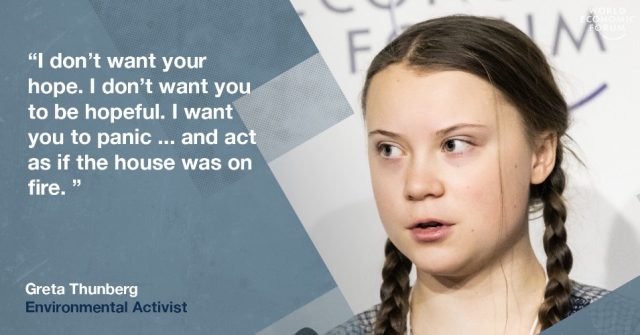 Putting pressure on the people in power.

The 16-year-old Nobel Peace Prize nominee—whose solo protests outside the Swedish Parliament have inspired #FridaysForFuture school strikes across the globe—has chosen not to fly to highlight air travel’s contributions to the climate crisis. Instead, she opted for what The Associated Press described as “a high-tech but decidedly low-comfort sailboat.”

Put pressure on the people in power

“That is what I am hoping to achieve with everything and that will also lead to international opinions,” she added, “so that people come together and put pressure on the people in power so that they will have to do something.”

“Of course there are many people who don’t understand and accept the science,” Thunberg told Agence France-Presse before beginning her journey. “I will just have to do what I have always done—ignore them and just tell the science as it is.”

Accompanied by her father Svante, a filmmaker, and the boat’s crew, Thunberg kicked off the trip Wednesday after a test sail on Monday. Leading up to and following their departure, supporters took to social media to wish them safe travels.

Others lined the coast Wednesday to send off the small group of sailors.

Earlier this week, Thunberg—who had not ever sailed before this week and got seasick on the short trip Monday—spoke to a BBC News film crew aboard the boat about the accommodations and the signal she hopes to send with her decision to sail on a carbon-free vessel rather than fly.

“But to call it a no-frills passage would be an understatement. The sailboat is built for high-speed, offshore racing, with weight kept to a minimum. The only alterations for the voyage are fitting curtains in front of the bunk and adding mattresses for comfort. There is no toilet or fixed shower. There’s a small gas cooker and the food will be freeze dried.

“Inside, the yacht resembles the interior of a tin can. It is dark and gray, with no windows below deck.

“Herrmann, who is skippering the boat, will take turns with Casiraghi steering the craft. He described life on board as a mixture of camping and sailing, with a thin mattress and sleeping bag the only comforts.”

“It’s not very luxurious, it’s not very fancy but I don’t need that. I need only a bed and just the basic things,” Thunberg said in a video interview with Bloomberg. “So I think this will be fun.”

“You can’t really ask for that much if you get to sail across the Atlantic for free,” she told the AFP. “I am grateful for what I have.”