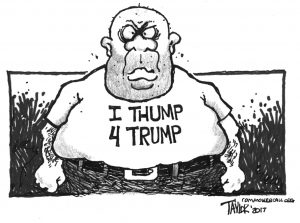 [Editor’s Note: And let’s be clear, here: it was the Obama administration that caved to Republican pressure and buried the report on the rise of the threat of white nationalism. It is another example of corporate dems not standing fast in the face of opposition. They helped create the metastasizing fascist threat. No more. The time for such corporate dem spinelessness is done. — Mark L. Taylor]

The economic recession and the election of America’s first black president would create fertile ground for rightwing radicalization, the 2009 report concluded. Military veterans returning from Iraq and Afghanistan, in particular, would be attractive targets for recruitment.

Republican politicians and conservative pundits reacted with outrage and demanded a retraction. The report was politically motivated and unfairly demonized conservative views, they argued. “Americans are not the enemy. The terrorists are,” the head of the American Legion, a veterans group, wrote.

The head of the Department of Homeland Security (DHS) publicly apologized. The small team of domestic terrorism analysts who had produced the report was disbanded, and analysts were reassigned to study Muslim extremism, according to Daryl Johnson, the career federal intelligence analyst who had led the team. By the next year, Johnson says, he had been forced out of the DHS altogether.

Since then, Johnson has watched a rising tide of white nationalist terror attacks around the world. This year, he published a book, Hateland, on American extremism.

On Tuesday, as federal officials announced that two deadly mass shootings within a single week were being investigated as domestic terrorism cases, he spoke to the Guardian about why the DHS’s own warning about rightwing terror was ignored, and what should be done to confront the threat of white nationalist violence. …

Far-Right Extremists Have Been Using Ukraine For Combat Training, And They Are Returning Home

A Petri dish for fascism.

Five years on, Mikael Skillt still doesn’t know exactly what made him leave his construction job and his girlfriend to fight in the war in Ukraine.

“I’ve done tons of soul-searching, and the more I think about it, the less I know why I came,” the 43-year-old told VICE News.

But an undeniable part of the draw was that Ukrainian ultranationalists, many with barely disguised neo-Nazi or white supremacist views, had been a driving force in the revolution. Skillt, at the time a notorious Swedish neo-Nazi with a 20-year history in the extreme-right scene, felt compelled to join their fight.

“All guys who seek adventure dream about this, to create history,” he said.

“You have a global network of violent white supremacists now who can easily keep in touch on different platforms and go back home, spread that propaganda, conduct training — or move on to the next fight.”

Skillt missed the revolution, arriving in Kyiv a few days after the ouster of President Viktor Yanukovych. Instead, he got a war. A Kremlin-backed separatist movement soon swept across the Donbas, Ukraine’s southeastern region bordering Russia. Skillt, who had served for five years in Sweden’s National Home Guard, signed up to fight with the Azov Battalion, a newly formed far-right militia with deep neo-Nazi ties, and headed for the front lines.

Throughout 2014 and 2015 he served as a combat sniper for Azov, fighting in major battles in Mariupol, Marinka, Ilovaisk and Shyrokyne. “I managed to get most of the big ones,” he told VICE News.

Though he’s since disavowed his far-right beliefs, he says he still gets chills when he thinks of his time at the front.

“This brotherhood which comes when you share life and death, it’s a poison. I’ve never been a drug user, but I can imagine the feeling is pretty much the same.”

Skillt is just one of many far-right extremists, estimated to number between the hundreds and the low thousands, who have flocked to eastern Ukraine to take up arms since fighting erupted in 2014. Hailing from across Europe, North and South America, and as far away as Australia, they’re drawn by the opportunity to fight alongside other right-wing radicals on either side of the conflict. Many see the battle as a crucial training ground for the defense of white Europe, where they can forge deep international links and gain combat experience they believe will be critical at home.

When they return home, they’re battle-hardened and more radicalized than ever, researchers say, and often fly below the radar of security services more focused on the returning jihadi threat.

“I believe Europe is in great danger,” Alberto Testa, an expert on far-right radicalization at the University of West London, told VICE News. He said eastern Ukraine had become a critical staging ground for the international “white jihad struggle” of the far right, where extremists could “train for what some would call racial holy war.”

Researchers warn that Ukraine is radicalizing far-right foreign fighters in the same way Syria has with jihadis — albeit on a smaller scale — creating a global network of combat-tested extremists who pose a security threat that is now beginning to manifest itself. …