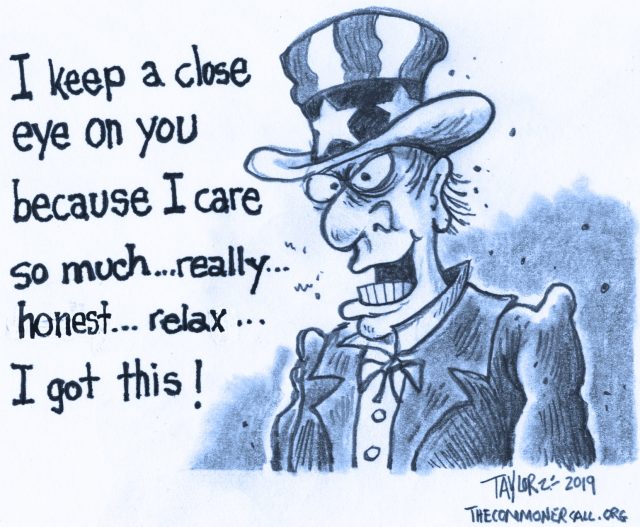 “These programs are not about stopping violence, they’re about social control.”

[Editor’s Note: Americans would never put up with the incessant hum of surveillance drones circling endlessly overhead as civilian victims of American wars have to. So, instead, unseen, silent, high-altitude and just as observant surveillance balloons will not attract attention while doing the job. History has shown that all empires hollow themselves out, eventually turning the weapons of foreign domination back on to the impoverished and beaten down civilians at home. This is happening now. — Mark L. Taylor]

Millions of Americans across the Midwest this summer are being subjected to surveillance from above as the Pentagon experiments with the use of surveillance radars attached to high-altitude balloons.

As The Guardian reported Friday, the defense and aerospace contractor Sierra Nevada Corporation was authorized by the Federal Communications Commission (FCC) to send up to 25 balloons across six states to track vehicles.

Civil liberties advocates were distressed at the newly-reported project on Friday, which the Sierra Nevada Corporation obtained a license to begin on July 12 and end on September 1.

“The deployment of this kind of surveillance capability in the United States is incredibly alarming,” Mana Azarmi, policy counsel for the Center for Democracy and Technology, told Common Dreams. “Persistent government surveillance, such as that facilitated by this technology, raises many civil liberties concerns and should not be permitted in the absence of a warrant.”

“Even in tests, they’re still collecting a lot of data on Americans: who’s driving to the union house, the church, the mosque, the Alzheimer’s clinic. We should not go down the road of allowing this to be used in the United States.”

Programs like the Pentagon’s balloon experiment “pose a grave threat to basic human rights, freedom of expression, and civil liberties,” Fight for the Future Deputy Director Evan Greer told Common Dreams. “These programs are not about stopping violence, they’re about social control.”

The balloons are being sent from South Dakota through portions of Minnesota, Wisconsin, Iowa, Missouri, and Illinois. Their high-tech radars are able to simultaneously track many vehicles at once “on a 25-mile swath beneath the balloon,” according to The Guardian.

The data the balloons’ sensors will record is similar to information the military has previously gathered using planes and is sometimes referred to as “combat Tivo,” according to Arthur Holland Michel of the Center for the Study of the Drone at Bard College.

“When an event happens somewhere in the surveilled area, you can potentially rewind the tape to see exactly what occurred, and rewind even further to see who was involved and where they came from,” Michel told The Guardian.

The use of wide-area surveillance by the military opens up huge possibilities for privacy violations and for the targeting of any American who may be engaged in activity that the government deems dangerous in the present or the future, the ACLU said.

“Even in tests, they’re still collecting a lot of data on Americans: who’s driving to the union house, the church, the mosque, the Alzheimer’s clinic,” Jay Stanley, senior policy analyst for the organization, told The Guardian. “We should not go down the road of allowing this to be used in the United States and it’s disturbing to hear that these tests are being carried out, by the military no less.”

The military’s project is just the latest example of a massive surveillance infrastructure that the government is creating, sometimes with the help of powerful private companies, Greer told Common Dreams.

“From police partnerships with Amazon’s Ring doorbells to these privately contracted spying balloons,” she said, “a dystopian surveillance state is being built in plain sight, by government agencies with authoritarian dreams and corporations willing to trample our rights to turn a profit.”

Support You Rights By Supporting The ACLU, Here.