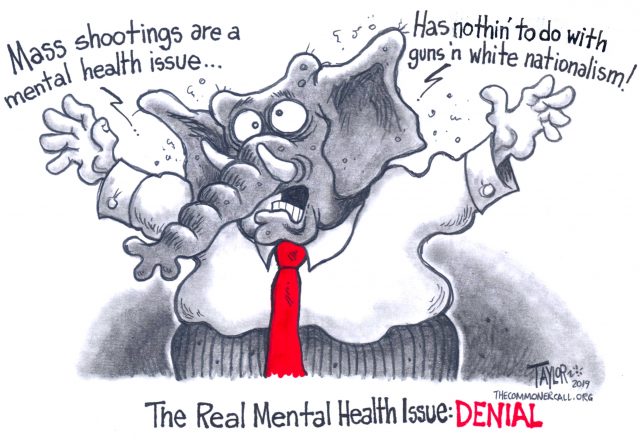 How many violent white supremacist attacks happened last year in the United States? 50? 500? 1,000? Recent news stories have reported a rise in such crimes across the country. Yet the truth is that no one knows the scope of far-right violence in the United States because the FBI and Department of Justice deprioritize the investigation and prosecution of these crimes and fail to collect accurate national data regarding such attacks, despite a congressional mandate to do so (see here for a list of state hate crimes).

Applying a hate crime label to an attack that clearly fits the statutory definition of domestic terrorism narrows the scope of the investigation and limits its resources.

These deficiencies arise as a result of Justice Department policies, not a lack of legal authority. Congress has already done its part to equip federal agents and prosecutors with ample tools to investigate and prosecute far-right violence. It passed 52 federal crimes of terrorism that apply to purely domestic attacks, as well as five hate crimes statutes that punish the specific types of violence far-right militants often commit. Organized crime statutes provide additional authority to dismantle the violent groups that instigate and perpetuate these crimes.

Despite these broad authorities, the Justice Department chooses to deprioritize far-right violence as a matter of policy and practice, which we examine in our new report, Fighting Far-Right Violence and Hate Crimes: Resetting Federal Law Enforcement Priorities. This is a follow-up to our first report on this topic, Wrong Priorities on Fighting Terrorism, which documented the dozens of federal laws the Justice Department has available to prosecute far-right violence.

When a white supremacist unleashes deadly violence against African Americans, Jews, Muslims, Sikhs, or LGBTQ people, the Justice Department can label these crimes acts of domestic terrorism, or hate crimes, or simply homicides. Each of these crimes carries significant penalties, but the label is meaningful because the FBI ranks countering terrorism as its number one priority, while hate crimes rank fifth and violent crimes sixth. …

Former Neo-Nazi Warns Mass Shootings Are Part Of A Broad Uprising: ‘It’s only going to get worse’

Former neo-Nazi Christian Picciolini, who created The Free Radicals Project, explained on CNN Sunday that these mass shootings from white supremacists are just the beginning.

He explained that the white supremacist manifesto the El Paso shooter left is something that he’s heard before.

“I think that manifestos have been very similar since 2009 when James von Brunn walked into the D.C. Holocaust Museum and left a manifesto,” Picciolini recalled. “They all reference the same conspiracy theories. Lately, they’ve been referencing something called ‘The Great Replacement‘ which this theory that whites being outbred in America and will be replaced. Now, it’s all based on conspiracy theories, but what’s similar about these things is now that they’re trying to outdo each other, I think the death toll is going to get bigger and bigger.”

Host Wolf Blitzer recalled the chants at the Charlottesville, Virginia riots, where men shouted out, “Jews will not replace us.” Picciolini agreed it was an example of that kind of “white replacement theory” the right believes.

“And Brenton Tarrant in the New Zealand massacre referenced ‘The Great Replacement’ and several others since then have referenced it as well,” he noted.

He also explained that President Donald Trump’s rhetoric is one part of a problem. …